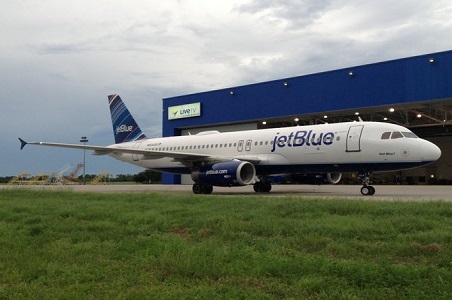 Add JetBlue to the list of airlines offering in-flight internet connectivity. The carrier officially launched their Fly-Fi in-flight connectivity solution this week with active service on just three aircraft. They expect to expand to a fourth plane this weekend, and a total of five planes by year’s end. More than 140 planes are expected to offer the Wi-Fi service by the end of 2014, and the entire JetBlue fleet will be equipped by 2015.

Fly-Fi represents a jump in technical performance for in-flight connectivity. The system offers up to eight times the bandwidth of other systems flying today, with more than 20 megabits per aircraft. That means streaming audio and video is possible without knocking other users offline or otherwise hurting their browsing experience.

Rachel McCarthy, JetBlue’s VP Inflight Experience, explained the value of the new platform during a demo flight yesterday morning. "We knew that being JetBlue we had to offer more to our customers," she said. "We’re following through on that promise. We have the ability to control the pricing . . . the amount of bandwidth really excited us."

The service has been called "At home in the sky", which, for many passengers on the demo flight, was actually an understatement. At least one passenger noted that the performance was actually better in the sky than in his living room at home.

The service has a split pricing model, with a free tier available through at least June 2014, as well as a paid premium option for streaming movies and other heavy bandwidth usage. Robin Hayes, JetBlue’s Chief Commercial Officer was quite keen on the free offering, stating, "As with all of JetBlue, our standard free offering beats their paid extras."

Based on the performance shown so far they have definitely beat out the competition with the Fly-Fi product. Happy Jetting!