JetBlue and Emirates to Connect Networks in May 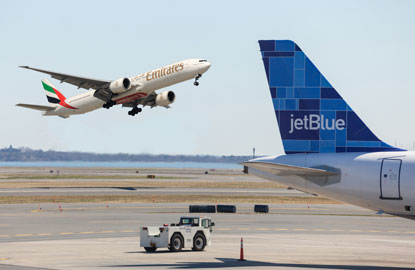 Emirates Airlines’ customers will soon be able to utilize the JetBlue network in the United States for flights between John F. Kennedy airport in New York and a dozen airports stateside, including Boston, Chicago/O’Hare, Jacksonville, Orlando, and Tampa. Last week JetBlue announced a codeshare agreement to connect its network with Emirates at JFK starting in mid-May. This means Emirates customers will be able connect at JFK via JetBlue flights. While the airlines have been inter-line partners since 2010, this new agreement will significantly expand Emirates reach in the United States.

"Emirates’ network within the United States will soon extend to almost 20 cities through our partner JetBlue, making flying to the U.S. from the Gulf, Middle East, Africa, the Indian Subcontinent and the Far East smoother and more convenient than ever before," said Thierry Antinori, executive vice president of passenger sales worldwide. "JetBlue shares our passion for innovation and best-in-class services, and we look forward to continuing to grow the relationship as we seek new ways to build our presence within the United States."