News Robin Catalano Horses Run Wild on This Puerto Rican Island⁠—but for How Much Longer?
NewsStep Into: James Bond’s London

I’ve always wanted to be a Bond girl…who hasn’t? Glamorous gowns, swanky hotels, a healthy dose of danger, and the chance to go head-to-head with 007 in exotic locales. Recently in London, I was lucky enough to have my wish come true when I was invited by VisitBritain to celebrate James Bond’s silver anniversary, which coincides with the November 9 release of Skyfall. No swilling Heineken here, this opulent escapade through the spy’s official headquarters is as close as one gets to living like a Bond girl. 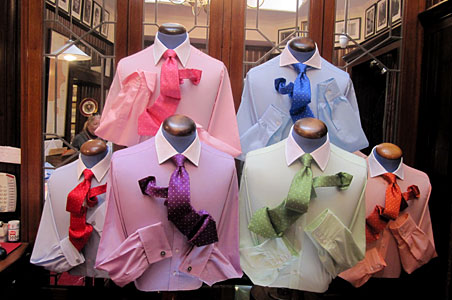 My mission begins in St. James at Fortnum & Mason, the Queen’s grocer, where a lunch of cucumber sandwiches and Earl Grey fortifies me for the window-shopping spree ahead (Sir Roger Moore’s famous protests of F&M’s selling of foie gras was not part of my Bond experience that day, though I was offered the delicacy by my server.) For pajamas befitting an M16 operative, I need only follow Judi Dench (who plays Bond’s boss M) to Turnbull and Asser, whose bespoke tailors outfitted my favorite femme fatale with a set of luxury nightwear. Turnbull and Asser have also sewn shirts for every single Bond actor in history. A quick jaunt to nearby Floris showcases No. 89, an orange-bergamot-nutmeg-infused fragrance and Bond creator Ian Fleming’s favorite which he would purportedly often pick up while strolling through the neighborhood—the very same one in which he grew up. A turn through Floris feels like a step back in time and indeed, the nearly 300-year old perfumery only recently shuttered their underground mixing chambers. Next up: shoemaker John Lobb, where they tell me the average pair of custom-made shoes takes eight months to complete. Occupying a space once rented by Lord Byron, the shoemaker holds two Royal Warrants to the Duke of Edinburgh and the Prince of Wales. And so it seems Daniel Craig, who wears a pair of black John Lobb Luffield shoes in the casino scenes of Casino Royale. 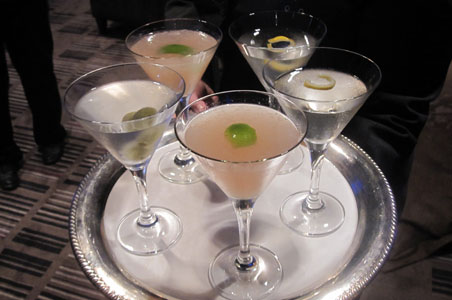 Nearby Dukes London hotel, with its discreet location off Piccadilly, is just the place for a Bond girl to kick off her heels. Though the jury’s still out on where Fleming first coined Bond’s famous "shaken, not stirred" martini order, Dukes is certainly doing its best to come out on top. For Bond aficionados, Dukes’ skilled barman Alessandro offers a Martini Masterclass in which he demonstrates how to coolly craft both a Dukes martini and the aptly-fatal Vesper martini. Participants first make their own martini (under Alessandro’s watchful eye), and then enjoy their personally-mixed concoction alongside tasty canapés. 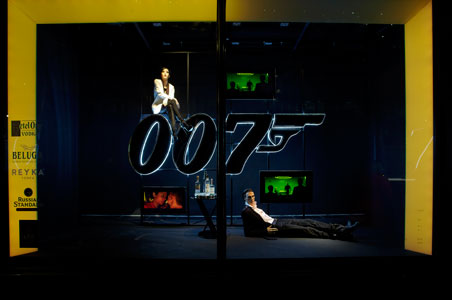 The next morning, it was off to the movies with Akin Gazi of Brit Movie Tours. Gazi, an actor himself (shocking, I know) is the most requested guide on these film jaunts. And after spending a few hours with him on the "James Bond Tour of London," I discovered why—he does a superb Sean Connery impression and a pretty good Goldfinger. He’s also quick on the draw with Bond trivia. As film clips were shown on a screen at the front of our luxury vehicle, we whirled around the city to Mi6 Headquarters, Ian Fleming’s birthplace, the St. Petersburg Square as seen in Goldeneye (i.e. Somerset House), and a handful of Skyfall locations. 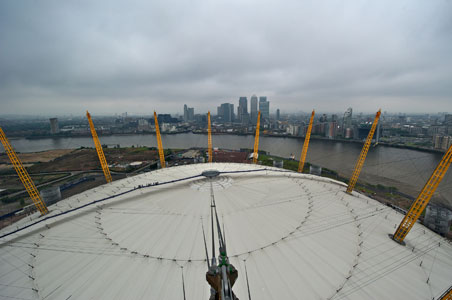 Bidding adieu to my Bond-enlightened tour guide, I board the Thames Clipper, a river bus which delivers me within minutes to the O2 Arena. I’m slated to climb the arena in a new adventure experience that’s officially called Up at the O2. And what exactly, you ask, does this have to do with James Bond? The O2 Arena was featured in the pre-title sequence of the 1999 Bond film The World is Not Enough, culminating in Bond rolling down the roof. Remember? Commencing at "Base Camp," I first view a prep video and sign my life away on a dotted line. I then don a pair of protective overalls (not quite a gown and heels, but it’ll do), listen to my guide give a 30-minute safety briefing, and I’m off! The hike, up a 30 degree incline, takes about 45 minutes as I link my metal hand harness to a safety cable which leads me to the top. Once there, I can relax and enjoy 360 degrees views of the London skyline on an enclosed platform. While the wind whips this way and that, I ignore those around me tweeting and snapping pics and take in the moment (or case the joint), as Bond girls do. No doubt, James will appear any moment with a bottle of Bollinger and two champagne glasses, right? He must have been running late, so I scurried back down (another 45 minutes). 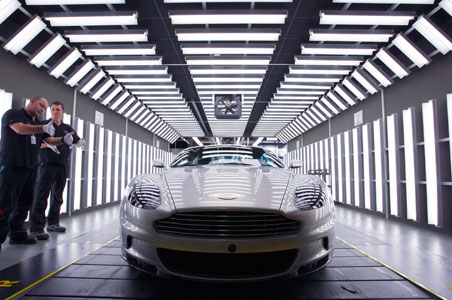 My appetite for fresh air and thrilling adventure piqued, the next morning, I hightailed it to Cheltenham, one of the poshest pockets of the Cotswolds about 100 miles south of London. My address for the evening is the elegant 62-room Ellenborough Park Hotel, a 16th century country estate and former home of the 1st Earl of Ellenborough, Governor General of India. Reopened last year with a state-of-the-art spa and swimming pool, Ellenborough Park sits across a 90 acre field from Cheltenham Race Course, but my sights were set on a different race course—the nearby Aston Martin Headquarters in Gaydon.

Here, I’m treated to a VIP tour of the factory, after which I buckle up in a gunmetal gray V8 Vantage S next to a professional driver named Steve for a lesson in speed (Steve did just fine as a 007 stand-in.) Steve takes me for a whirl in the iconic 007 vehicle and even bravely lets me take the wheel. Ten minutes on the M40 Motorway at 95 miles an hour—on the other side of the road, mind you—is about as much adrenaline as this Bond girl needed for the day. (Quick note: sadly, this adventure is open only to Aston Martin owners and, in my case, journalists invited for the Bond anniversary.) 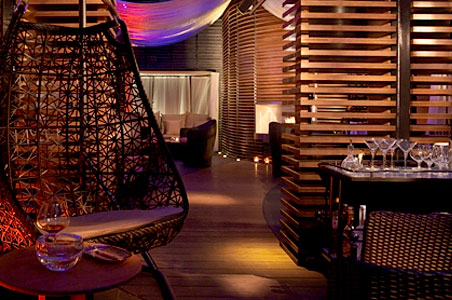 Feeling antsy back in London, I head to my hotel—the chic Mayfair on Stratton Street—and saunter (strut?) towards the hotel’s new Cigar Room. Here, I enter a world of dim lighting, swing chairs, chic day beds, and chainmail mesh walls. Since the smoking ban has altered the evening geography in London, the Mayfair opened the Cigar Room and touts it as the best COSA (cozy, outdoor smoking area) in the city. I plunge myself into a massive swing chair beside a roaring fire, I pour over the smoking menu and assert my independence with the "Cigar Concierge" by ordering the Juliet, a small cigar that seems befitting a Bond girl. Also on offer here are cigars from Hunters & Frankau and selections like the Cuban Behike 52 and the Hoyo de Monterrey. As I take my first puff on Juliet, I think I see a shadowy figure across the room…martini in hand (shaken, of course).