Deals Leila Najafi Attention West Coast: You Can Now Book Flights to Paris for as Little as $321
Home  >  News   >   Hit the Slopes — in South America

Hit the Slopes — in South America 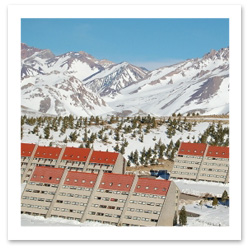 It’s been dumping snow in the Andes Mountains this month, and there’s still plenty of time to plan a “summer” ski excursion down to South America.

Airlines are offering great rates now from the U.S. to Argentina and Chile. LAN Airlines has flights from New York to Buenos Aires from $619, and from Los Angeles from $839. LAN also offers connecting flights to the Argentine ski resort towns of Bariloche, Mendoza, and Ushuaia. American Airlines is offering a $719 rate this week from Dallas or Miami to Santiago, where you can hit three world-class mountains less than an hour from the capital.

El Colorado, La Parva, and Valle Nevado offer killer slopes, heli-skiing, kids lessons, and snowboard parks within reasonable driving distance of downtown Santiago. If you head six hours south of the city, you can enjoy spa pampering and chill in the natural thermal baths at Termas de Chillan, a top-notch resort and mountain with lots of fresh powder and nearly empty trails.

In Argentina, there are an array of options throughout the country, all for bargain rates. Most day passes cost around $40. Cerro Cathedral is the country’s oldest and largest ski resort. It was designed by a Swiss ski champ in the 1930s and has amazing views over Lago Nahuel Huapi.

In the nearby city of Bariloche, there are great restaurants, chocolate shops, and casinos. Argentina is the world’s undisputed capital of Polo, so be sure to check out the first-ever Women’s Snow Polo Invitational on August 25th in Bariloche. This one-of-a-kind event is bringing female polo players from the United States, Spain, Kenya, Italy, Colombia and beyond to compete in the foothills of the Andes.

Outside Mendoza, Las Lenas (photo, top) attracts a jet-set crowd and has fantastic slope-side accommodations and some of the highest trails on the continent.

To carve some serious freshies, head south, way south, to Ushuaia, the southernmost city on the planet. There, Cerro Castor offers great fresh powder runs and a ski season that lasts well into October. And remember, Après Ski is taken seriously in Argentina and Chile, so be sure to bring your shades and be ready to sip some slope-side cerveza and champagne.