News Apeksha Bhateja A Volcano Eruption Taught Me Something Unexpected About Travel
Home  >  News   >   Italy: What to Skip, and Where to Go Instead

Italy: What to Skip, and Where to Go Instead 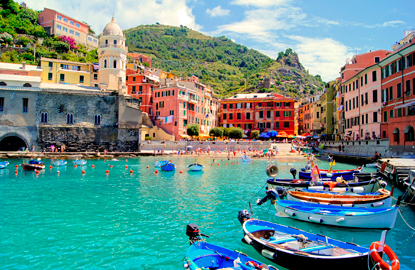 Italy is a well-traversed country. Unlike less-trodden Croatia or Turkey, visitors from all over the world descend upon the boot in droves for an authentic taste of its homegrown specialties (olive oil! pesto!), Renaissance art, and gothic architecture.

So as you can imagine, finding lesser-known haunts and hidden gems can be a challenge. Rather than wait in lines to see art everyone else has seen, or taste gelato that everyone else has sampled, take the road less traveled. Some of Italy’s most beaten paths, like the Amalfi Coast, Florence, and Pisa can (and should) be skipped in favor of more intriguing, less tour-bus-filled counterparts. Read on for the best alternatives.

The legendary picturesque destination that is the Amalfi Coast exists in movies like The Talented Mr. Ripley—where limoncello is liberally poured at intimate coastal bars. In reality, you’ll find more tourist busses than Jude Law types. Your best alternative? Cinque Terre (pictured above), or "five towns" set along the rocky northern coast overlooking the Ligurian sea. Once you reach La Spezia (just north of Pisa), each of the small five towns can be reached by foot or by train. What’s more, they offer a feast for the five senses.

In the multi-colored village of Riomaggiore, the first of the towns from the south, venture along the Via dell’Amore. It got its name shortly after World War II, when this trail became a rendezvous point for lovers who lived in Riomaggiore and neighboring Manarola. Today, those who pass through leave padlocks as a nod to everlasting love. Continuing on, stop in sleepy Manarola. At the top of town, by the bell tower, you’ll find a wooden railing with steps up to a vineyard path where you’ll take in the scents of grapevines and lemons trees, while bumblebees whiz by and lizards scurry at your feet. The path leads down to the cemetery and then to the breakwater where you’ll either continue along the trail, or if it’s still closed due to recent landslides, catch a train to the next town.

Once arriving in Corniglia, you’ll climb 365-steps to reach town; it’s the only one of the five not in a harbor. It’s worth the trek, if only for a midday glass of vino at Enoteca Il Pirun, which serves them in a funnel-like glass called a Pirun. Apparently, it allows the wine to breathe better. But it’s also silly. (Plus, they give you a bib in case you dribble, which makes for great photos.) Walking along narrow passageways that hug the coast, you’ll see Cinque Terre’s best views as you make your way into Vernazza.

Vernazza is charming with windy streets and a mini beach with large rocks for sunbathing. Recently hit by a massive flood and landslide, it is still recovering from more than 100 million Euros in damage and the loss of three lives. Stop to listen to the waves crashing along the rocks before trekking along to the next town.The trek to Monterosso is the most strenuous, but it’s worth the exercise as you’ll want to do nothing but eat on arriving. (You’ll also want to shell out a few Euro for a lounge chair at one of the beach clubs.) The biggest and most ‘resort-y’ of the five towns, you could easily stay the night. But first, try the simple and delicious lemon acciughe (anchovies) at Risorante Miky, the frutta di mare at L’Alta Marea, and the crema a limone gelato at Slurp! Gelato Artiganale.

Where to Stay: Stay in Vernazza if you want charm and intimacy. But if you also want views, be prepared to hike up stairs. Lots of them. Try Gianni Franzi, whose reception is located in Gianni Franzi Ristorante off the main drag of Piazza Marconi. Their 20 rooms vary in size, but are tucked away amid the carugas overlooking the breakwater. Rates from 70-100 Euro.

If you want modern and hip, the new Hotel Margherita in Monterosso’s Old Town is where it’s at. You’ll get all the amenities—A/C, WiFi, satellite TV—in any of the 31 rooms. Rates from 80-230 Euro. 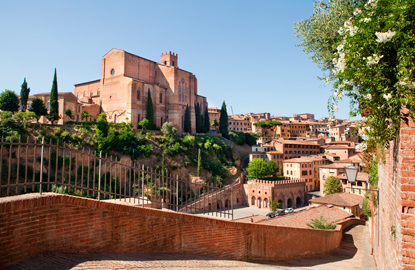 You’ve heard about David’s "package" and the gold on the Ponte Vecchio. You’ve read tips about navigating the streets between the Uffizi Gallery and the Duomo, and you’ve seen photos of the bistecca fiorentina at Trattoria Mario.

But if you seek a less overwhelming taste of Medieval Italy, try Siena; the ancient walled city known for its differing "contrades" (neighborhoods), each represented by banners and flags featuring 17 symbols from the Oca (goose) and the Tartuca (turtle), to my personal favorite Leocorno (unicorn).

Siena is best explored without an agenda, since it’s a fairly small city with winding cobblestoned streets that ultimately lead into the Piazza del Campo, with its 400-step Torre del Mangia, a massive tower built in the 14th century. If you’ve got the energy, climb to the top for spectacular views of Tuscany.

As is often the case, the cafes and trattorias around the square get very touristy, so get lost among the car-less streets surrounding it. If you’re lucky, you’ll land at the mysterious-looking Pizzicheria de Miccoli, with its velvet-curtained doorway. Inside, a man who looks straight out of Ratatouille will cut fresh slices of porchetta, prosciutto, and various cheeses for a sandwich. There are no tables and chairs, but it’s worth standing and dining on a stack of wine crates at this family-owned shop.

Where to Stay: Try the very elegant Certosa di Maggiano, a 14th century monastery with just nine rooms and eight suites, making it a romantic destination for couples. With vaulted ceilings and beautiful aristocratic decor, you’ll feel like royalty at this intimate resort outside the city walls. 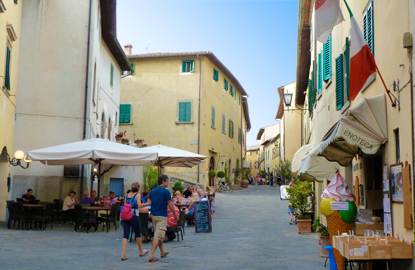 San Gimignano means well. But the walled city plays host to tourists clamoring into wine tasting rooms for a sip of Vernaccia wine before climbing the bell tower before stopping in a leather store, before hopping back on the bus. Think smaller, to Castellina in Chianti. 35 miles south of Florence, you’ll get an intimate look at the true charms of Tuscan life.

First, duck under the covered passage known as the Via delle Volte. Along the Medieval walls, you’ll find galleries, gelaterias, and shops selling locally made wooden kitchen tools. At the end of the covered tunnel at the edge of town, turn back and walk along the sidewalk on the sunny main drag where you’ll find kitschy shops and sidewalk cafes.

If you have a car, drive a quick 20 minutes to Panzano in Chianti to pay a visit to the Dante-quoting butcher, Dario Cecchini, at his classical music-blaring butcher shop: Antica Macelleria Cecchini. You’ll find locals seated along the curb just outside enjoying glasses of red wine and small plates of his ‘sushi del Chianti’ and other treats offered complimentary for newcomers (and regulars).

Where to Stay: Head to the center of town where Palazzo Squarcialupi offers 18 beautiful rooms with wooden-beamed ceilings and frescoed walls. Sunbathing by the pool offers views of rolling green hills and cypress trees. Rates from 120 Euro. 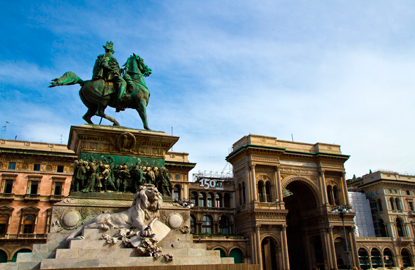 Rome is so yesterday. Literally, it’s ancient. From The Vatican to the Colosseum to the Trevi Fountain, there’s lots of looking back here. Sure, areas like Trastevere now offer a glimpse of the modern, young Italian lifestyle, but most people come to Rome to ponder "the way we were."

Despite what you’ve heard ("it’s gray and industrial "), skip Rome in favor of the northern metropolis of Milan, where well-dressed locals commute by rent-a-bike and order spritzes (Aperol, Prosecco, and an orange slice). (It was also one of Fodor’s Places to Go in 2012) Of course, Milan offers plenty in the way of history, from da Vinci’s The Last Supper at the Santa Maria delle Grazie to the gorgeous Gothic Duomo, but it’s best to take advantage of the well-run Metropolitana (subway) to explore beyond the obvious. This is the city of Armani, Prada, and Missoni after all.

Head to the Brera neighborhood to pop into designer stores where you’ll discover they offer more than just exquisite (expensive) clothing—most stores have "extras" like cafes and hair salons, not to mention merciful blasts of air conditioning. Anyone with a subscription to Vogue should head to 10 Corso Como, a sanctuary for the high-heeled looking for over-the-top accessories, perfumes, shoes, photography, furniture, books, and of course clothing, in a hyper-designed space (that also has a café).

Being in Italy, Milan has no shortage of great restaurants. Try classic Milanese dishes, like cotoletta alla Milanese (breaded veal cut), with just touch of lemon and a side of arugula at Liu Ristorante. Splurge at Osteria La Bistecca where bowtie-wearing waiters serve super-soft meatballs, creamy spaghetti carbonara, and of course, mouthwatering bistecca.

When the sun goes down, aperitivo heats up. Many restaurants offer meals with the purchase of a drink (think happy hour, but with prosciutto instead of wings.) Head to the Naziglai area to find a host of choices and do yourself a favor: douse yourself in mosquito spray first. As the night wears on, find an outdoor couch at Pacino Cafe, a hip spot that plays everything from house music to Kings of Leon.

Where to Stay: If you want to feel like a local, try Alle Meraviglie, a boutique hotel near the Duomo that offers apartment-like living with super chic amenities. Rates from 175 Euros. Or, splurge at the sleek, luxe Bulgari Milano, where you’ll find modern rooms within and manicured gardens that invite locals and guests outside for coffees or aperitivos. Rates from 530 Euro. 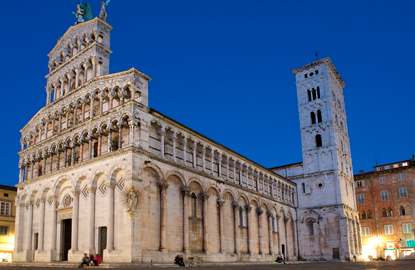 So there’s this tower that’s leaning… and it’s been leaning for a while now… Worth seeing? We’d say no. You’ll have more pictures of tourists than the tower anyway. Skip over to Lucca instead, where the streets are filled with fewer tourists (or at least fewer obvious ones) and the Tuscan lifestyle is alive and well.

Yes it’s another walled city, but this one is mostly pedestrian and isn’t as hilly as the others, making it also bike friendly. Lucca’s architecture is noteworthy, with the carved stone columns of the Duomo and pastel-colored stucco buildings with terracotta roofs. Add to that the horse-drawn carriages, and the town takes on this magically charming vibe. Opera fans will want to stop and pay respects at the birthplace of Giacomo Puccini, just steps from the center of town.

You’ll spot local teens eating pizza off paper plates while sitting on the curbs of cobblestone roads, while older locals opt for a street food specialty known as cecina, or "Tuscan Toast"—flatbread made from chickpeas.

At Caffe Di Simo off the main shopping street of Via Fillungo, enjoy an espresso and ponder the life of Puccini, who was a regular.

Where to Stay: Hotel Ilaria may be slightly removed from the city center, but they offer free bike rental, and seeing as that’s the best way to get around Lucca, this modern 36-room hotel (with a hot tub, to boot) is a win-win. Rates from 200 Euro.