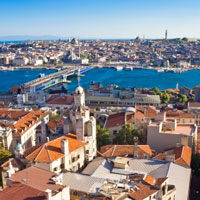 Istanbul has been luring travelers for thousands of years but today there are more reasons than ever to visit this incredible city. From museums to mosques, bazaars to boutiques, there is no other place on earth that matches Istanbul when it comes to contrasting old and new, East and West, secular and religious.

Istanbul is a 2010 European Capital of Culture, and the year has been filled with celebratory performances and festivals, including art and architecture shows, jazz festivals, rock and hip-hop concerts, ballet, film festivals, and fashion events all giving the city a chance to showcase its culture. Upcoming highlights include a Puppet Festival (Aug. 23–28), a whirling dervish Mevlevi Culture and Sema Ceremony (Sundays in Aug.), special Ramadan Istanbul Events (Aug. 8–Sept. 8), and many other music and art exhibitions through the fall.

Food and travel go hand in hand, and Turkish cuisine holds many delights, especially for vegetarians—it seems like Turkish cooking offers at least 1,000 different ways to prepare an eggplant. Mezes, the small plates similar to Spanish tapas, are a great way to sample all sorts of delicacies, especially when accompanied by raki, an anise flavored liquor.

Some of our favorite spots to sample Turkish cuisine in all its many guises include the very casual Çiya, where the chef/owner is something of a culinary anthropologist, collecting recipes from around the country and serving delicious incarnations in his no-frills eatery; Cezayir, which serves innovative "new Turkish cuisine"; Abracadabra, a relatively new spot that focuses on natural, local, and seasonal ingredients; and Giritli, which serves outstanding fish dishes and has a lovely garden.

Indeed, the Turks make the most of the good weather in summer and fall with alfresco dining—especially on the city’s rooftops. The Beyoglu neighborhood, which sits on a ridge overlooking the Bosphorus, the Golden Horn, and the sights of Sultanahmet (the old city) is leading the rooftop charge; here you can eat dinner while looking at both Europe and, across the water, Asia. This is real intercontinental dining.

Two restaurants—360 Istanbul, atop a historic apartment building, and Mikla, at the top of the 18-story Marmara Pera hotel, have spectacular 360-degree views. (If you’re choosing between the two, Mikla is, generally speaking, for an older crowd, while 360 Istanbul is a good place to get a glimpse of the city’s younger elite.) The open-air (summer only) NuTeras is a chic bar that serves excellent mezes and looks out on the Golden Horn.

Whether your interests are old, new, religious, or secular, there’s no lack of awe-inspiring sites to see in Istanbul, the cradle of civilization. In Sultanahmet, compare the Blue Mosque, with its mesmerizing blue tile exterior, with Aya Sofya, the church-turned-mosque-turned-museum, whose interior size and grandeur will take your breath away. Make sure to visit the sprawling riches of the Topkapi Palace, home to generations of sultans and the harems. For a quick respite from the chaos, descend into the peaceful Yerebtan Sarnici cistern, where you can wander on walkways over the water, with classical music playing in the background. To juxtapose all this history check out the Istanbul Modern, a converted warehouse on the shores of the Golden Horn, showcasing modern painting, sculpture, and photography from Turkey and around the world.

For an easy, convenient way to get away from the hustle and bustle of Istanbul, take a ferry trip up the Bosphorus from the EminönÃ¼ docks in Sultanahmet. The boats zigzag up the Bosphorus, stopping for a three-hour break at one of two fishing villages on either side of the Bosphorus, near the Black Sea. Either village is great for an inexpensive and delicious meal of fresh fish before you take the ferry back to town.

If it’s a beach you’re looking for, take a ferry to the Princes Islands: Buyukada and Heybeliada, the two largest of the nine islands, are both car-free but easy to get around, whether you rent a bike or a horse and carriage.

Istanbul has been a shopper’s town for, well, centuries, and the sprawling Grand Bazaar, open since 1461, could easily be called the world’s oldest shopping mall. You’ll find everything from carpets, leather, and gold to furniture, clothes, and knickknacks. This is not to say that the city is stuck in the past, though—far from it. Istanbul has a wide range of modern shopping options, from the chic boutiques of Nisantasi—some of our favorites are the moderately priced Yargici, the innovative Bahar Korçan, and elegant Gönul Paksoy and, to huge shopping centers like the ultramodern Kanyon mall in the Levant neighborhood.

There is no shortage of hotel rooms in Istanbul and it seems like each season at least one new luxury-brand hotel opens. If you want to go all out, there are a bevy of fabulous options—the Four Seasons Hotel Sultanahmet, in the heart of the old city’s chaos, manages to be an enchanting respite, while the new side of town is home to the W Istanbul and the Swissôtel Istanbul, just to name a few. Of course, there are more down to earth lodgings to be found as well, with plenty of local flavor and color. One of our favorites is the Hotel Empress Zoë, a boutique hotel in Sultanahmet that blends a funky, interesting atmosphere with charming rooms and friendly service.

Perhaps most intriguing, though, is the historic Pera Palas hotel, set to reopen in September 2010 after a €20 million facelift. This legendary lodging is being restored to its original grandeur: it first opened its doors in 1892 to welcome guests arriving from Paris on the Orient Express. Everyone who was anyone stayed here, including Mata Hari and Agatha Christie. Now guests will be able to stay in classic rooms while enjoying modern amenities, such as a new spa.