News Dan Stables True or False: There Are Wild Predatory Cats Roaming England’s Countryside
NewsIsrael Made Easy: What You Need to Know

Israel Made Easy: What You Need to Know 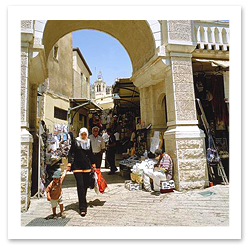 Israel gets as much rain as London, but also more than 300 days of sunshine. Summers are hot and very dry. Winters are mild along the coast, warm at the Dead Sea and in Eilat, but often chilly in mountainous areas like Jerusalem (though with plenty of gorgeous days). Pack an umbrella November through March. In April, May, September, and October, the weather is generally sunny but not uncomfortably hot.

You can get almost anywhere in Israel by bus, and the Central Bus Station is a fixture in most towns. Ask for the tahana merkazit. The Egged bus cooperative handles all of the country’s bus routes, except those in Tel Aviv, where the Dan company operates. There is a non-smoking policy on all buses. Fares are a flat-rate per journey, not based on distance. For both local and intercity travel, bus drivers accept payment for tickets (payable only in shekels). They do not make change for a bill over NIS 50. It’s faster to buy tickets at the bus station.

Probably not the best idea. Within the cities, walk or take cabs or buses. Why? Because when you rent a car in Israel you are generally responsible for any damage to or loss of the vehicle. You may also be liable for any property damage or personal injury that you may cause while driving. Before you rent a car (do remember that gas costs the equivalent of U.S. $6 per gallon), see what coverage you already have under the terms of your personal auto-insurance policy and credit cards. 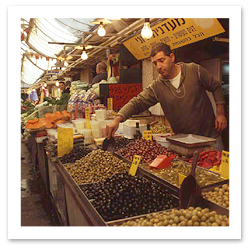 The Israeli shekel (designated NIS) is the currency, but the U.S. dollar is widely accepted. Rates for hotels, guiding services, and car rentals are always quoted and paid for in foreign currency, thus avoiding the 15.5% local VAT. Many better stores offer a government VAT refund on purchases above U.S.$100, claimable at the airport duty-free. Currency Exchange: For the most favorable rates, change money through banks. Although ATM transaction fees may be higher abroad than at home, ATM rates are excellent because they’re based on wholesale rates offered only by major banks. A word of advice: avoid buying gold, silver, gemstones, and antiquities in bazaars (like Jerusalem’s Old City souk), where things aren’t always what they seem and prices fluctuate wildly.

Israel is a complex society. Its orientation is Western, but it is very much part of the Middle East. Its character is predominantly Jewish, but one in five Israelis are either Muslim, Christian, or Druse. Hebrew dominates, but the Arab and Druse communities speak Arabic, and there are a million native Russian speakers. English is widely spoken, sometimes fluently. There are two English dailies (except on Saturday): the liberal Ha’aretz, which comes together with the International Herald Tribune, and the more conservative Jerusalem Post. English-language books are widely available, and Channel 3 carries English news once a day.

Muslim sites are closed for tourists on Friday, the Muslim holy day. Avoid the Muslim Quarter of Jerusalem’s Old City between 12 noon and 2 p.m. on Fridays, when the flow of worshippers in the streets can be uncomfortable or even rowdy. Some Christian sites close on Sunday; others open after morning worship. Jewish religious sites, and some museums and historical sites, close midday Friday and remain closed through Saturday (the Jewish Sabbath).

Israel is religiously conservative, very in the Holy City of Jerusalem, less so in cosmopolitan Tel Aviv. In Eilat, almost anything goes. Dress code for religious sites means no shorts, bare midriffs, or sleeves shorter than T-shirt-length. Men cover their heads in Jewish shrines and synagogues, bare them in churches. 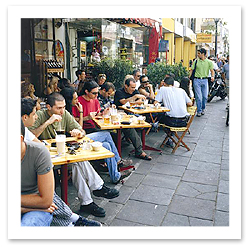 Restaurants that abide by “kosher” dietary regulations, to satisfy a particular clientele, close for Friday dinner and Saturday lunch (Sabbath ends at dark). Kosher hotel eateries remain open, but will not offer menu items that require cooking on the spot. “Kosher” has nothing to do with particular cuisines but with certain restrictions (no pork or shellfish, no dairy and meat products on the same menu). Kosher restaurants today have to compete with a growing number of nonkosher restaurants, so the variety of kosher food is growing. Tipping (in cash) is 12% minimum. There is great coffee all over Israel. Latte is called “hafooch”; and if you want black coffee, ask for “filter” coffee. Tap water is safe throughout Israel.

Israel is the world’s leading cellphone user (per capita). Vacations can mean getting away from it all, but if you need to stay in touch, order an Israeli cellphone in the USA, or rent one at Ben Gurion Airport. Most hotels offer paid Internet access, and the better ones WiFi. There are some public WiFi areas in the large cities, and downtown areas have a scattering of Internet cafés.

Although Israeli cities are remarkably safe, you should use common sense when driving or walking in isolated areas at night. Still, you’ll find that the downtown areas of major cities are not dangerous at night, even if you’re alone. Incidents on Israel’s borders in the summer of 2006 have caused legitimate concern among travelers, of course; but even so, with most of the country not directly affected, it has been business as usual on the streets of Tel Aviv and Jerusalem. Tourists have stayed out of the West Bank in recent years, the exceptions being Bethlehem and Jericho (circumstances permitting). But even these cities are best undertaken only on an organized tour or with a guide who knows the area well.