A Taste of Trinidad’s Island Flavors 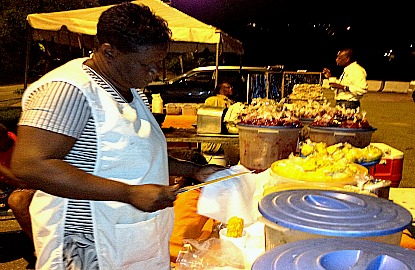 Trinidad capital Port of Spain offers two distinct dining scenes showcasing the island’s multifaceted cuisine. Look to Ariapita Avenue for its cluster of hip, multiethnic restaurants doling out both modern and traditional Trini dishes. Or, try the Savannah Strip for Trinidad’s best street food vendors, who essentially stuff all that fantastic island flavor into neat wraps, served up with a smile. Herewith some expert advice on where to chow down, just in time for Trinidad’s hosting of the Caribbean’s greatest Carnival celebration, kicking off on February 20.

Head to Ariapita Avenue to uncover some of the best dining options in Port of Spain. Ariapita, dubbed Restaurant Strip, is often likened to Miami’s Lincoln Road for its concentration of open-air restaurants, bars, and clubs. The "Avenue," not much more than a half-mile strip, is where locals go to “lime” and dine. On weekends, the Triniratti fill the clubs and restaurants to capacity, often spilling out onto the street—but never spilling their beloved local rum, Angostura (try the 1919 blend). Restaurants serve Indian, Chinese, Greek, Caribbean, Creole, French, and Italian cuisine, among others, with many menus featuring inventive, gourmet dishes infused with local spices.

Where to Eat: At the newly opened Flair (2 Taylor St., corner of Ariapita), a whimsical cocktail menu highlights indulgent concoctions such as the Oink Oink (red rum, dark crème de cacao, molasses, ice cream, and—bless their hearts—bacon). For a delicious cocktail that doesn’t drink like a meal, try the Canal Water (white rum, vodka, gin, tequila, blue curacao, grenadine, and Sprite). An extensive wine list is also available. Starters, in portions often large enough to be finishers, include a creamy seafood tostada forestiere and north coast shark hush puppies. But save room for their main course offerings, particularly the barbecue pulled pork, which is piled on a blue corn waffle that quite efficiently absorbs all that sweet and spicy chipotle sauce. Or, try the wasabi-dusted ahi tuna.

Expert Tip: For home-cooked creole, Veni Mang&eacute can’t be beat for their callaloo, a thick stew that’s Trinidad’s national dish. Many consider Veni’s recipe the best on the island.

The southwest side of Queens Savannah Park harbors a strip of some 30 vendors, who prepare some of Trinidad’s tastiest, most exotic street food nightly. You simply must try out a roti here: Recipes can vary, but generally this hefty sack of goodness comes filled with channa (chickpeas), pumpkin, potatoes, spinach, and either curried chicken (with or without bones), shrimp, or goat (there are vegetarian options, as well). Another closely related and delightfully distended wrap is known as doubles—made with fried flatbread called bara and filled with curried channa, spicy chutneys (mango, cucumber, coconut, tamarind), and pepper sauce.

Where to Eat: Start your feast by heading up to Lady Young Lookout. Here you’ll find Ms. Earlyn ladling chunky corn soup into Styrofoam cups for hungry locals (pictured above). Drink in the soup, as well as the panoramic views of Port of Spain from this scenic overlook. Then it’s down the mountain to the Savannah street food strip, where, in addition to rotis and doubles, you’ll find bake-and-shark, souce (seasoned meats such as chicken foot, pig foot, cow heel), and phoulori (deep-fried balls made with corn flour, ground split peas, and seasonings). The accompanying dips are crucial; choose from curried mango sauce or other sweet and savory finishings. At a tent helmed by a fellow named Sam, try the "Buf Flow" wings—Texan-style chicken wings smothered in a secret sauce that the locals queue up for nightly. You can also get fresh juices and Dr. Fresh’s punches, or try the local soft drink LLB (lemon, lime, and bitters—a way-better-than-Sprite drink) or cold Carib beer. The Savannah Strip is open nightly from 5pm till the food runs out, usually around midnight.

Expert Tip: The best way to experience these essential Trinidadian street scenes is to schedule an "After Dark" Tour with the friendly folks at Banwari Experience Limited ($75 per person). They’ll customize your tour according to your tastes, and by the time you get to your dessert of homemade ice cream and rum punch, you’ll be an expert on Trini cuisine!

Thinking of a trip to Trinidad?

For up-to-the-minute hotel and restaurant recommendations, plus the best planning advice, check out our online Trinidad and Tobago Travel Guide.