News Tina Charisma 'Regenerative Travel' Is the New Buzz Phrase, but What Does It Mean?
Home  >  News   >   Is Mexico Safe? 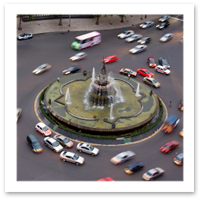 In the first of a series of articles on travel to Mexico, a Fodor’s editor—with the help of a few Fodor’s writers—weighs in on current safety south of the border.

If you only read mainstream news reports and official government travel-safety warnings, you probably aren’t planning a trip to Mexico any time soon. H1N1 and drug violence do not a relaxing vacation make.

But if you look at a variety of sources, compare facts, and ask around, things aren’t so clear. The answer to “is Mexico safe?” becomes “it depends”—as in, it depends on where you go and how you travel. It depends on how secure you feel moving through the world in general. And it depends on how diligent you are about taking precautions, some of which you should take wherever you travel.

The News: Bad and Ugly

I’ve been visiting Mexico for several years, but always to beach destinations, where you’re often cocooned inside the walls—and security systems—of large resorts, where there are lots of other cringos, and where many of the locals speak English, work in the tourism industry, and have an interest in helping you to feel safe. On a recent trip to Mexico City—my first—however, I had some reservations.

Mexico has long and justifiably been known as a place of corruption and petty crime. Pickpockets there are skilled, as are credit-card and other scam artists. Although it’s hard to get precise figures, robberies, carjackings, and rape are an issue, particularly in Mexico City. Kidnappings are seemingly less frequent but are nevertheless a concern—particularly libre-cab kidnappings (the driver of an unofficial cab—as opposed to a radio taxi or one at official stands or sitios—kidnaps a passenger for 24 to 48 hours, forcing him/her to make repeated ATM withdrawals).

It’s also true that violent crime is rising, primarily due to President’s Felipe Calderón’s continuing war on the drug cartels (which, by the way, are also warring with each other). Estimates for 2008 put nationwide drug-cartel related deaths at a record high of between 5,000 and 6,000, with about 50% of them taking place in border regions.

There have been reports of firefights in Tijuana, Nogales, and Cuidad Juarez. Well down the Pacific coast, Acapulco has also seen an increase in disturbances since 2006. And parts of the central state of Michoacán are troubled as well.

A Little Perspective (And Some Numbers)

Here’s the thing: the drug-cartel-related violence you read about is aimed at police or military personnel and cartel gang members, not tourists. It also generally takes place in rough neighborhoods rarely frequented by travelers. Further, there are few serious problems, in many parts of Mexico, including the major resorts of Cancún and the Caribbean coast, the Pacific coast, and southern Baja.

How did I feel in Mexico City? Well, it is a vast, often chaotic place—one where I don’t speak the language and didn’t know the territory. But I certainly wasn’t afraid for my life. Indeed, I wasn’t anywhere near as nervous as I expected to be. I listened to the guidance of the locals about where and when to be most on guard and how best to get around. I took my usual precautions (dress like a local, walk with confidence, wear cheap sunglasses to hide any worry in my eyes, carry only the minimum of cash and a single credit card—if that). I now have a better sense of the city and how to explore it safely, and I’m hoping to visit again soon.

The fact is, you’re much more likely to die in a car accident in Mexico than any way else. Of the 681 non-natural, non-military deaths of United States citizens abroad recorded by the U.S. Department of State between July 1, 2006, and June 30, 2009, roughly 300 were listed as “Veh. Accident—Auto.” Most of the 150 or so homicides listed took place in border regions. Indeed, a Google search of Mexico homicides for June 2009 showed that incidences (there were 6) on the state department’s list for that month coincided with news reports of murdered Americans who were suspected of being involved with the Mexican cartels.

It’s important to heed the warnings about Mexico on the U.S. State Department Web site. But not everything is dark and gloomy. President Calderón has dedicated some 20,000 troops to deal with drug cartels, no small number and a nod to the fact that the government is taking this problem seriously. What’s more, in 2008, 22.6 million people, including 5.8 million Americans, visited Mexico. Tourism is big business, so it’s in the best interest of the country to keep travelers safe.

If you thoroughly research how and where (or not) to travel, listen to advice of those in the know, assess your tolerance to risk, and take the necessary precautions, you might just find a trip to Mexico safer than you thought.

I asked my writers for their takes on Mexico safety and for a few quick tips. What are your thoughts? Let us know in the comments.

Use Global Common Sense But Learn Local Tricks As Well

“In 10 years of living in Mexico City, and traveling throughout the country, I’ve had very few safety problems. I attribute this good fortune to the fact that I have native Mexican family and friends who’ve taught me good safety practices. Topping the list are these simple but important rules: follow all laws, pay close attention to the location of your wallet or purse—especially in crowded environments like metro stations and crowded buses, be discreet with your valuables, keep your cell phone handy, and let family and friends in on the details of your itinerary as well as your current location.”

“Every region, every town, and every neighborhood in Mexico offers unique experiences and pleasures. And it’s impossible to anticipate all of the safety concerns that could possibly arise. However, I have learned that simply asking lots and lots questions will not only turn up information that makes travel more interesting but yield useful tips for keeping safe as well.

Michele Joyce has contributed to Fodor’s Mexico since 2005. She holds a BA in Mexican History and Culture from UC Berkeley and an MA in Modern Art History from Casa Lamm.

“Is Mexico safe? Definitely. Mostly. There’s no question that travel to Mexico requires extra vigilance for most of us. At home, we know which areas are safe and which aren’t. We know who to turn to if we need help. We speak the language. We know the lay of the land. That’s not the case in a foreign country. But paranoia isn’t necessary. My work takes me all over Latin America, from the Río Grande south to Tierra del Fuego. Overall, I feel most secure in Mexico.”

“If you’re a Mexico novice, you can’t go wrong with Los Cabos (just back from there), Puerto Vallarta, Ixtapa and Zihuatanejo, Cancún, Cozumel, and the Mayan Riviera. Sure, they live for tourism, but there’s a safety in numbers and a security in their familiarity.”

Costa Rica-based freelancer Jeffrey Van Fleet is a frequent traveler to Mexico, and has covered Los Cabos and Baja California for Fodor’s. He has also written for Fodor’s guides to Costa Rica, Guatemala, Panama, Peru, Chile, Argentina, and Central and South America.

“Overall, Mexico’s reputation is undeserved. I recently traveled in Egypt, and my group had armed guards everywhere it went. Now that’s a tad dangerous! Most of Mexico is very safe. The border areas are most affected by the drug wars (I certainly wouldn’t go to Juarez), and if there is some sort of drug violence or serious crime, it generally doesn’t take place in tourist areas.”

“If you’re nervous about Mexico, go to beach resorts like Cozumel, Cancun, the Riviera Maya, and so on. There are so many gringos around, you’ll feel right at home.”

Award-winning writer Maribeth Mellin, who contributes to Fodor’s Cancún, has been traveling around and writing about Mexico for nearly three decades. Her column “Mexico: The Real Deal” appears in the San Diego News Network (SDNN.com)

Be Very Careful on Road Trips

“To avoid unwanted situations, stay clear of the border and avoid traveling long distances by car. In general, resorts are the best bet for a worry-free vacation since they usually have large staffs, 24-hour security, and in-room safes.”

“Cancun and the Yucatan Peninsula, for example, are free of most dangers found in big cities. Cancun’s Hotel Zone is a high-trafficked tourist area, making it extremely safe for those who want to relax at the beach or explore the string of shops and restaurants that line Boulevard Kukulcán. Downtown Cancun (El Centro) is equally safe at night, especially in the upper class section from Avenida. Tulum to Avenida Bonampak. That said, avoid Avenida Yachilan and the sector beyond Chichen Itza at night. The area of Las Palapas is somewhat questionable as well.”

Marlise Elizabeth Kast has contributed to over 50 publications including Forbes, Surfer, San Diego Magazine and the New York Post. She has also contributed to Fodor’s guides to Cancun, Mexico, Puerto Rico, Panama, and San Diego.

Tourists Are Not the Target

“The American news coverage of Mexico’s drug violence has made the problem seem more widespread than it is. The likelihood of a visitor encountering this violence is remote; the targets are the police, the army, and other gang members, not ordinary citizens or tourists. Living in the central part of the country, our only exposure has been what we’ve seen and heard on television. Our town of San Miguel de Allende and the surrounding area seem as safe as ever.”

“Other types of crime don’t seem to be on the increase. And, having recently traveled to Guatemala, we can say that crime against individuals is much more of a problem there. Visitors to Mexico should exercise the same precautions they would anywhere (including the United States). . . prudence is always a good idea.”

Gerard Helferich and Teresa Nicholas are contributors to Fodor’s Guatemala, and for the past seven years, residents of San Miguel de Allende, Mexico.

Take Advantage of the Drop in Visitors

“Traveling in Mexico, like traveling in any new place, requires an initial period of awareness and discovery: how do local people behave? Which parts of town are full of life, and which should you avoid at night? Baja Norte is as friendly and beautiful as ever—beyond an increase in crime in Tijuana, the most notable change is the drop in visitors across the entire peninsula. Take the obvious precautions, but enjoy the trip!”

“For the most part, Mexico is a safe travel destination. Keep in mind that much of what you hear in the news these days is drug-related violence…. The safest bets, of course, are the large-scale tourist resorts…. Some final words of caution: always look both ways before crossing the street. It’s a sound rule of thumb in a nation where many drivers tend to see a stoplight as a mere suggestion.”

John Hecht, is a correspondent for The Hollywood Reporter who lives in Mexico City. He has contributed to Fodor’s Cancún.