Replete with resorts, Cancun is one of the safest cities in Mexico—and well removed from border violence. In fact, it’s 1,300 miles from Cancun to the northern border of Mexico (the same distance from New York to Texas). Cancun’s crime rate is much lower than that of most U.S. cities. Mexico is a very large country and the resort city of Cancun continues to be a safe destination for visitors. Here are answers to four of today’s most common questions about safety in the area. 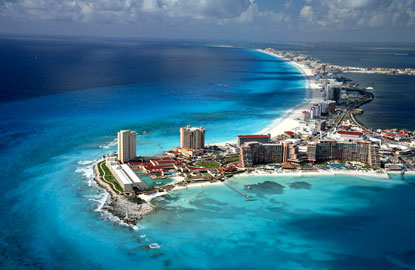 How safe will I feel in the Hotel Zone?
Cancun’s Hotel Zone (“Zona Hotelero”) is a high-trafficked tourist area, making it extremely safe for those who want to relax at the beach or explore the string of shops and restaurants that line Boulevard Kukulcán. In the past year, security has increased on this main strip, which means you’ll most likely see armed Tourist Police driving up and down the Boulevard. There is also a security checkpoint that marks the entrance to the Hotel Zone on Boulevard Kukulcán in front of Playa Delfines. Tourists are rarely stopped here.

Can I still visit Downtown Cancun?
Downtown Cancun ("El Centro") offers more culture than Hotel Zone, but due to the lack of tourists in this area, many travelers tend to avoid El Centro altogether. The "upper class" section from Av. Tulum  to  Av.  Bonampak, is considered the safest part of El Centro. For those who intend to spend time in this downtown area, the dark streets of Av. Yachilan and the sector beyond Chichen Itza should be avoided at night. The somewhat questionable area of Las Palapas caters to budget travelers, and is extremely popular with locals, transvestites, and gays. In August 2010, eight people were killed when a gang burned down a bar near El Centro’s Bullring at Plaza de Toros. This act of violence has resulted in the C4 Surveillance and Rescue Center installing video cameras in strategic points throughout the city. Additionally, an emergency 911 Call Center is now in place.

What about the U.S. government warning?
Though more extreme than a travel advisory, the State Department’s latest travel warning for Mexico does note the differences in this large country: “Resort areas and tourist destinations in Mexico do not see the levels of drug-related violence and crime reported in the border region and in areas along major drug trafficking routes.”

Are there any precautions that should I take when in Cancun?
Visitors are always encouraged to exercise caution and use common sense while traveling. This means avoiding illegal activity and staying within the main tourist areas. As Fodorite Staceye8 says "It can be unsafe anywhere you go. Just be smart about it and aware of your surroundings. Go and enjoy the beautiful cities of Cancun, Playa del Carmen, Isla Mujeres, etc."