If you consider yourself an intrepid, independent traveler who wouldn’t entertain the idea of big-ship sailings, don’t write off cruising just yet. Intrepid cruising, I discovered, is not an oxymoron.

I was recently introduced to the idea of expedition cruising aboard Aussie-run Orion Expeditions’ 106-passenger Orion. On it, I discovered the ultimate anti-cruise, far removed from mainstream or humdrum itineraries and maddening crowds. These cruises cater to a clientele with a sense of adventure and a call to the high seas and offer access to off-the-beaten-track and often difficult (or impossible) to access locales. Excursions are active and hands-on, aimed at encounters with pristine natural sites and authentic local cultures.

The best part? While expedition cruise ships have largely been rugged and purpose-built with barebones onboard basics, Orion Expeditions has managed to deliver luxury alongside adventure. 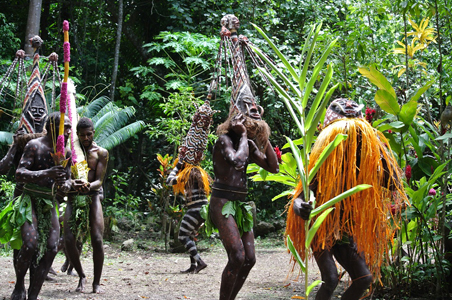 I recently made way for the Melanesian islands of Vanuatu, the Solomon Islands, and Papua New Guinea on Orion’s 10-night "Melanesian Discovery" itinerary, a unique voyage, scheduled only once a year. Calling upon island nations where tourism is still very much in its infancy, it was an anthropological and geological goldmine of a trip.

Most excursions were focused on learning more about traditional ways of life and tribal customs, offering cultural encounters via ceremonial welcomes and musical performances. Refreshingly authentic, we came ashore to these remote lands assured that our foreign footsteps were few and far between.

Ample time was also set aside for snorkeling, swimming, and sea kayaking around this South Pacific region’s pristine coral reefs, renowned for their colorful tropical fish and Technicolor coral.

Our sailing embarked in the capital of Vanuatu at Port Vila, with its French flair and scenic harbor—by far the most developed port we’d come across during the voyage. Venturing further into Vanuatu, we called on Malekula, where some 30 distinct languages are spoken. An onshore cultural performance included dancing and music, complete with elaborate masks. Next, Espiritu Santo offered insight into the region’s World War II history and rich coral reef ecosystem, with an optional scuba dive to the sunken SS President Coolidge warship. 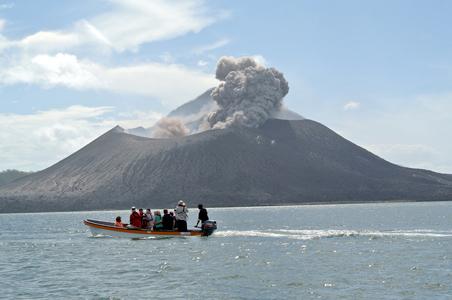 Continuing on to the Solomon Islands, plans to visit the remote islands of Utupua and Santa Ana were thwarted by a brewing tropical cyclone. Instead, two rocky days were spent fleeing the cyclone’s path, but guests’ flexibility and the team’s improvisation prevailed. The storm subsided, and a stand-in stopover, themed on WWII, was added in Guadalcanal. Next up was Nggela Island, with white-sand beaches, lush vegetation, and offshore World Discoverer wreck; followed by snorkeling on the reefs of the Marovo Lagoon.

The itinerary concluded in Rabaul, Papua New Guinea, aka the "Pompeii of the Pacific," known for its half-dozen volcanos (two recent eruptions nearly wiped out the settlement in 1994) and WWII history—we arrived just in time to watch a spectacular eruption of the Tavurvur Volcano (happily, from a safe distance)! 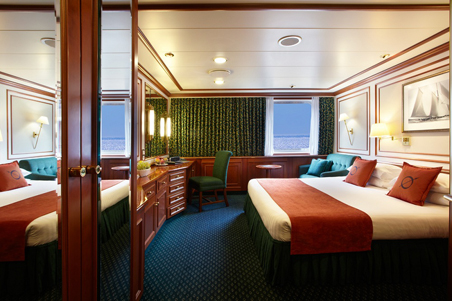 Most excursions required zodiac transfers and "wet landings" to wade ashore, so guests needed a certain level of agility to climb in and out of the boats, and to navigate the sometimes rough terrain onshore. Even though most of our fellow cruisers were in the baby boomer (or beyond) bracket, they were a remarkably fit bunch.

Another striking thing our fellow passengers had in common was a reliably relaxed demeanor and ability to take unexpected events in stride—with the anticipated kinks of a one-off itinerary and unpredictable weather patterns, flexibility was a huge help.

Breakfast and lunch were served buffet style, and held outdoors when weather permitted. Afternoon tea led into happy hour-fueled excursion recaps in the lounge. Those, in turn, spilled over into dinner (served in a single open seating in the main dining room). Dinner was followed with light musical entertainment in the lounge.

Purpose-built for expedition cruising, Orion didn’t sacrifice form for function. Well-proportioned quarters and plush appointments went beyond expectations for a vessel of this size, with fine fittings and furnishings throughout, and ample public spaces including a duo of lounges, sun deck with Jacuzzi, small spa and salon, lecture theater, library, and gym.

Fellow guests won out, by far, as the most engaging and sociable bunch I’ve taken to the seas with. Well-travelled and adventurous, mealtimes, lounge visits, and excursions turned into convivial encounters. Most passengers hailed from Australia, with a sprinkling of Americans and Brits in the mix; the vast majority were repeat Orion cruisers.

The 75-person crew was led by a standout expedition team, including a seasoned marine biologist and an animated American geologist, who led daily briefings, guided onshore excursions, and offered extra regional insight with regular lectures and presentations.

Orion Expeditions was recently acquired by US-based expedition line Lindblad Expeditions (who partners with the National Geographic Society). Orion, the company’s solo ship, will begin operating under Lindblad’s banner come March 2014, when it will be rebranded as the National Geographic Orion. Slated to offer a new series of itineraries, including a 2014 Melanesia voyage, dates and rates are still pending.