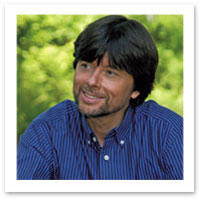 Ken Burns’s epic documentaries are famous for their in-depth explorations of uniquely American experiences and ideas. His latest, The National Parks: America’s Best Idea, starts September 27th on PBS. The National Parks, a beautifully illustrated companion book co-authored with Dayton Duncan, is on sale now. Both are the perfect inspiration to start planning a trip to your national parks.

Fodor’s recently spoke with Ken about his experience filming the documentary and about his favorite parks (he just spent his vacation in Arches and Canyonlands). Here, he shares his most treasured hiking experience, his pick for must-see park, and more.

Fodor’s: What made you choose the National Parks as the subject of your upcoming documentary?

Ken Burns: For more than 30 years, I’ve been asking the same deceptively simple question with each film: Who are We? And I can’t imagine any subject more appropriate than the history of the national parks. This is not a travelogue; it’s not a nature film; it’s not a recommendation of which lodge or inn to stay at. Rather, it’s a history of ideas and individuals that make up this uniquely American thing. For the first time in human history, land was set aside—not for kings or noblemen or the very rich—but for everyone and for all time. And indeed, the title of our film is The National Parks: America’s Best Idea.

Fodor’s: What one park do you think is underrated?

KB: I would urge you to see at least Denali in Alaska, if not many of the other parks there. More than half of all the acreage of national park land in the United States is in Alaska. And it’s one spectacular show after another.

Fodor’s: What was your first memorable experience traveling to a National Park?

KB: When I was six years old, my dad took me on our first and last road trip together and we went to Shenandoah National Park in Virginia. And I remembered the hike we took, this impossibly long hike of maybe a mile and a half on my little six-year-old legs. I remember what I wore. I remember that my dad was able to describe and name every tree and plant and animal. It’s one of those life-changing memories.

Fodor’s: Is there something you always pack for your National Park trips?

KB: Water and a map. I remember standing at the top of the Grand Canyon after my oldest daughter and I had hiked out in 2005. We’d been filming down on the river for several days and she and I climbed out from Phantom Ranch—a long arduous climb—and when we got up and it was now hot and we noticed that there were tourists descending the rim in heels. You want to warn people to be more thoughtful of this steep hike. The rangers all have stories of rescuing people. One of the people in our film says, “it’s 7 miles down and 107 miles back up.”

Fodor’s: Have you had any particularly memorable meals in the parks?

KB: It’s been just sharing with friends when filming and sitting around a campfire and realizing just how special it is. It’s not the food, it’s the company. That was always the definition/ingredient of a great meal. When you add to it the extra added benefit of being in a National Park with its pristine and spectacular beauty then those are the best meals of your life even if you’re eating beans or cooking a hot dog on the fire.

Fodor’s: If you were going to splurge and stay in a grand lodge, which would be your favorite?

KB: I think for just sheer sense of being transported to another time: Old Faithful Inn at Yellowstone. That beautiful atrium that runs five stories of just old, bent wood beams is one of the most romantic man-made places on earth.

Fodor’s: Did you do much camping in the parks?

KB: We camped up in Yosemite and hiked up past Vernal and Nevada Falls, which was thrilling and wonderful. I look forward to doing the more extended camping thing in John Muir’s Yosemite. I think I would hike up into the High Country to Tuolumne Meadows.

Fodor’s: What should people know about America’s National Parks before visiting?

KB: This may sound obvious, but I think people should remember that they own them. That this is not some place that you’re going to that is “other.” It is in fact like going home. Everyone in the United States is a co-owner of some of the most spectacular seafront property, of the highest free-flowing waterfall on the continent, of the greatest collection of geo-thermal features on the planet, and the grandest canyon on earth. I think people need to remember that it’s a common wealth and you should visit your property now and then and make sure it’s being taken care of.

Fodor’s: Any recommendations for getting away from the crowds?

KB: As millions of American know, it is possible to be in a traffic jam in Yellowstone, to experience the frustrations of the modern world in these parks. And this just takes a little bit of extra planning. Go before or after schools are out for summer vacation. Go early in the morning and later when you can see the most spectacular sunrises and sunsets—what the poet Emily Dickinson called “the far theatricals of day.” Remember that all you need to do is go just a few hundred yards off the beaten track and you’re essentially alone.

Fodor’s: Where was one of your favorite experiences in the parks during filming?

KB: Everywhere: Seeing buffalo emerge from behind a steam vent at Yellowstone. A dawn at Cadillac Mountain. Being close to alligators and crocodiles and watching thousands of wading birds take off at their night roost in the Everglades. All of these, and many more, are indelible experiences that I think stay with us all to the end.

Love America’s national parks? Submit your favorite photos from one of your national parks vacations for a chance to win a copy of Burns’s National Parks.
Submit your photo
View recent entries