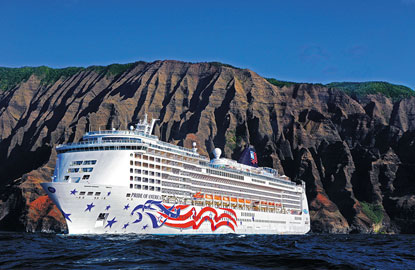 It’s funny how two dusty, old laws—the 1886 Passenger Vessel Services Act and the 1917 Jones Act—have done so much to shape the face of the cruise industry today, especially when it comes to Hawaiian itineraries.

You’ve probably wondered why so few cruise lines sail a Hawaiian inter-island itinerary (one that begins and ends in a Hawaiian port of call). The Passenger Vessel Services Act says that no foreign ship may transport passengers between ports in the United States. This dovetails with the Jones Act that President Woodrow Wilson enacted in order to protect U.S. shipping companies from foreign competition. That law states that passengers sailing between U.S. ports must be carried in a vessel that was built in the United States, is owned by American citizens or a U.S.-based corporation, and that the crew is made up of Americans and/or legal aliens.

In this day and age of globalism, almost no ships are built in the United States anymore and when was the last time you were on a ship with a predominantly American crew?

To bring inter-island cruising to the Hawaiian Islands, Norwegian Cruise Line went to bat and asked Congress for certain dispensations in order to launch its seven-night itineraries within Hawaii. For the last few years, NCL’s Pride of America was the only game in town when it came to regularly scheduled Hawaiian inter-island itineraries. That changed last year when luxury yacht company, American Safari Cruises, entered the market. Now, its sister company, InnerSea Discoveries has announced that it too will sail Hawaiian waters, starting Fall 2013.

This is fantastic news for travelers who’ve been looking for a perfect Hawaiian cruise that focuses solely on those beautiful islands.

NCL is still the go-to cruise line for travelers looking for an affordable mainstream ship with all the extras. With a passenger capacity of 2,138 and 940 crew, Pride of America‘s got the real estate necessary to offer 11 restaurants plus room service, eight lounges, one coffee bar, a basketball/volleyball court, two pools, hot tubs, gym, video arcade, theater, Mandara Spa, and more.

Pride of America‘s seven-night itinerary visits four Hawaiian islands: Oahu, Maui, the Big Island, and Kauai. The highlight of this itinerary is a sail-by of Kauai’s spectacular Na’Pali Coast.

If you’d prefer an unstructured, nature-centric itinerary aboard a luxury yacht, American Safari Cruises—a division of InnerSea Discoveries—has the answer with its 36-passenger Safari Explorer. The captain follows a loose path to cover ground between the Big Island, Lanai, Maui, Molokai, and the Big Island. You’ll visit secluded beaches and quiet coves and will get up close to wildlife like dolphins, sea turtles, and whales via the ship’s skiffs and while swimming off the aft marina. Safari Explorer offers an all-inclusive option so you won’t pay extra for excursions lead by the ship’s onboard naturalists, and all wines and spirits are included.

If a back-to-nature Hawaiian cruise appeals to you but you’re looking for something less expensive than American Safari, the 76-passenger Wilderness Explorer from InnerSea Discoveries is your best bet. Wilderness Explorer will spend her first season in Hawaii starting November 2013.