News Apeksha Bhateja India Is Experiencing a Brutal Heatwave. Here's Why It Matters to You
Home  >  News   >   Insider’s Guide to the Great American Beer Festival

For the longest time beer was treated as a second-class libation, failing to garner the attention of its hoity-toity cousins wine and liquor. But with the craft brew movement going strong, beer has staked its place at the table of refined, well-respected buzzes. 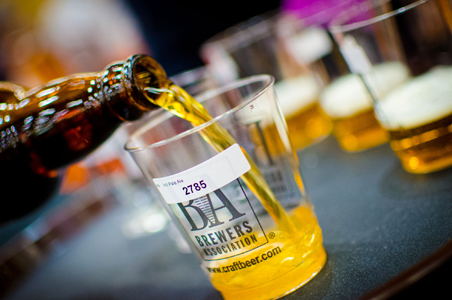 There’s no better spot to celebrate all things beer than at Denver’s Great American Beer Festival (October 10-12). But with 600 breweries from across the country pouring 2,800+ beers, you’re going to need a game plan. Here are one local’s tips for making the most of the GABF.

This year’s GABF will mark the largest collection of US beer ever served under one roof, which means that even the most seasoned drinker will leave thousands of beers un-sipped. The first step to ensuring you hit all of your bucket-list beers is to download the GABF app for a sneak peek at the brews being poured (the app will be available mid-September and the complete list of festival beers will be added on Oct. 9).

Next, create an action plan. Maybe you want to taste hard-to-find beers that your local liquor store doesn’t stock, like the medalists or all the sours. Whatever it is, come prepared. If you don’t show up knowing what you want to try, you’ll likely end up with the dreaded taster’s remorse.

Insider Tip: Brewers Association and American Homebrewers Association members can attend the members-only Saturday afternoon session. Not only is this the quietest session and a great opportunity to talk shop with the best brewers in the country, but it’s also when medal winners are posted.

Sure, you can show up in normal garb, but the GABF is the Oscars of beer—seize the opportunity to show your beer love. Attendees wear favorite brewery t-shirts, lederhosen, and even full-on beer bottle costumes.

You’ll know the GABF veterans by their pretzel necklaces. Since you can’t bring in outside food (and it’s slim pickings inside unless you like stadium-style food), the loophole is winding pretzels, beef jerky, and just about any other form of sustenance onto a string and wearing it around your neck.

Start at the far end where it’s less crowded. People tend to run to what’s closest, but you can skip early lines by heading to booths furthest from the entrance.

Remember your attack strategy? Stick to it! Know that breweries are organized by geographic region, and use that to map out your drinks.

Don’t feel bad about dumping a beer you don’t like. There are plenty of others to try and booze-space is of the essence. 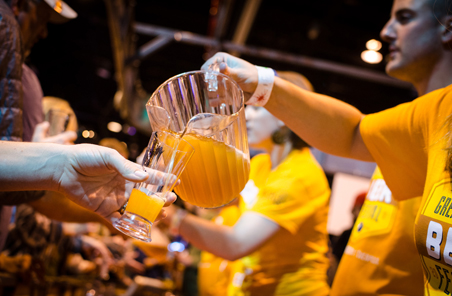 The air is thinner up here and the altitude can affect your alcohol tolerance. Don’t assume that you can drink as much at 5,280 feet as you do at home (especially if home is at sea level). Drink lots of water (complimentary water stations are provided inside) and keep your stomach full to prevent a not-so-fun hangover.

Get filled up at one of the great restaurants near the convention center. Row 14 may be a wine bar, but the Colorado cuisine (think lamb Bolognese and spicy braised beef short rib) at this upscale bistro make it popular with the beer crowd too.

For cheaper eats, Snarf’s is one of the best sub shops in town. Sam’s #3 cooks up just the kind of greasy (in a good way) diner food that pairs perfectly with beer—and is the ideal cure for a GABF-induced hangover.

If you’re not beer-ed out from the festival, downtown bars and restaurants do their part to lure in the GABF crowd. Bars like Falling Rock have a slew of brew events all weekend, and many bars put special beers on tap. In fact, many locals consider this to be the best week of the year for bar hopping in Denver.

Still Need Tickets? If you don’t have tickets you’re not alone; the event sold out in 45 minutes last year. Score some via Craigslist (although be prepared to pay top dollar) or by landing a coveted volunteer spot—volunteers are given passes as a thank you for their hard work.

Photo credits: All photos courtesy of the Brewers Association