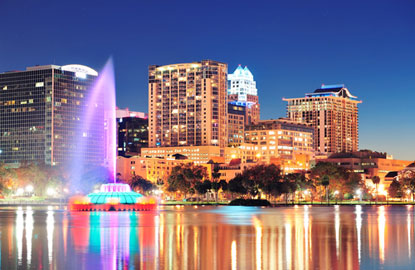 Quick, what’s the first word that pops to mind when you hear the word "Orlando"? If it’s Disney, you’re not alone. But there’s a lot more to explore in this Central Florida town of 2.1 million non-Disney characters. If you find yourself with some free time on your hands after a few days at the theme parks, hop in your rental car and head north to the city proper.

The obvious place to begin an exploration of Orlando is along downtown’s main artery, Orange Avenue. The home of commerce by day, and bars and clubs at night, you may want to stop at crossroads Wall St. or Church St. for a tipple. Both spots attract a very young crowd; Wall St. bars tend to be a little more low key; Church St. clubs rock til the wee hours. If you’re after something even more chill, try the Bosendorfer Lounge at the elegant Grand Bohemian Hotel, where there’s live jazz every weekend evening and a popular jazz brunch on Sundays.

Just east of downtown is the beating heart of the city, Lake Eola Park, a 23-acre lake and surrounding park, with a mile-long waterfront pedestrian path. Make your way around the lake, stopping in at one of the waterfront restaurants like Relax Grill or to feed some of the park’s resident swans. Alternately, rent one of the swan-shaped paddleboats for $15 per half hour and putter out to the lake’s iconic fountain, just redone in 2011.

Orlando is home to a thriving Vietnamese-American population, and with it comes some fantastic Vietnamese restaurants. Ground zero is the intersection of Mills Avenue (Hwy. 17/92) and Colonial Avenue (Hwy. 50), just north of downtown. You can’t go wrong with a stop at Pho 88 or Little Saigon for bowl of steaming hot noodles, or try the oddly named Boston Bakery (407-228-1219) for the best bahn mi this side of Hanoi. And it’s only $3.

Heading north from Little Vietnam along Mills, you’ll see signs for Harry P. Leu Gardens: follow them. Different areas of the 49-acre botanical gardens are in bloom year-round, and wandering the paths among azaleas, bromeliads, and roses makes for a relaxing afternoon. The Leu House Museum, a restored 19th-century home, is open for tours on the half hour starting at 10 am.

Round out your exploration of the other Orlando with an evening at the Enzian Theater, further north on Mills Avenue (called Orlando Avenue here). Start with a cocktail—the menu is varied and inventive— at the on-site, outdoor Eden Bar, set amidst tropical foliage with ceiling fans lazily waving away the heat. Then head inside for a movie; get comfortable on one of the theater’s velvet couches and order dinner and a drink during the flick, anything from a cult classic like The Goonies, to the latest alternative releases, both domestic and foreign.