News Annette Richmond Meet the Activists Reshaping the Travel Industry for the Better
Home  >  News   >   In the Pink: Off-Season Bermuda

In the Pink: Off-Season Bermuda 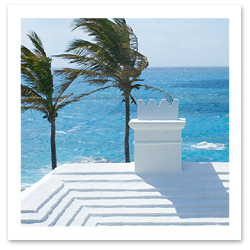 Maybe it’s the waving palms and the turquoise water. Whatever the reason, many travelers tend to equate Bermuda with tropical islands like Aruba or Jamaica. Yet while those Caribbean hot spots are gearing up for their peak tourism season, things are slowing down in Bermuda, where the low season extends from November through March. The welcome mat stays out, though, so you won’t get the cold shoulder, or even get cold. Since the island is warmed by the Gulf Stream, winter weather is mild, with temperatures ranging from 70 degrees in early afternoon to 55 degrees at night.

So dig out those Bermuda shorts. We’ve got seven reasons why you should visit now.

Fare Well
Although Bermuda feels like a world apart, it lies just 650 miles east of the Carolinas. That means airfare can be quite affordable. For instance, Jet Blue, American, and Delta will all set you up with round-trip tickets from New York this November for under $250, provided you pick the right mid-week dates. Off season, at least, lodgings are affordable because rates (based on supply-and-demand) drop along with the mercury in local thermometers. Take the venerable Fairmont Hamilton Princess and its sportier sister resort, the Fairmont Southampton. At the former, January rates start at $279 a night. In June they’re priced from $429. At the latter, savings are even greater. Rooms start at $229 in low season, $469 in high.

Dodge the Mob
Losing yourself on the crooked back alleys of 400-year old St. George’s, Bermuda’s original settlement, is easy. Losing your fellow tourists is another matter, especially during the March-to-November cruise season, when multiple ships can dock here daily. The same goes for Bermuda’s other two ports: pint-sized Hamilton (the capital) and the Dockyards (a former military stronghold that is now a premiere tourist attraction). Last May alone, more than 52,000 passengers poured onto the island, and since Bermuda covers only 21 square miles, crowding is inevitable. Key sights are swarmed. Restaurants fill to capacity. Wait for the off season, though, and you can pretty much have the place to yourself. The friendly locals, moreover, will be genuinely happy to see you.

Go Fore It
Bermuda is a dream destination for golfers. Not only is it said to have the world’s highest concentration of courses but its seaside links are undeniably scenic (they were, after all, laid out by top architects like Charles Blair Macdonald and Robert Trent Jones). However, summer’s hot sun can make a friendly round feel like an extreme sport. That’s assuming you can actually get one of those coveted tee times! Which is why astute swingers come off season, when the weather is ideal and the hordes of duffers have departed. As an added incentive, Bermuda typically organizes thrice-weekly tournaments for visitors November through March at the better golf courses (including Port Royal, a favorite of Jack Nicklaus).

Walk This Way
Moderate temperatures and low humidity make this an ideal time to hit the Bermuda Railway Trail, too. The 18-mile route, which runs almost the entire length of the island, was created out of an abandoned rail bed in the 1980s and is known for both lush greenery and lookouts that offer sublime water views. The Spittal Pond Nature Reserve, hugging Bermuda’s south shore, is another option for outdoorsy types. Its 64 acres have walkways that wind past woodlands, wetlands and the craggy coast. Spittal Pond also happens to be Bermuda’s largest bird sanctuary, and November to May it’s a magnet for bird-watchers thanks to the 30-plus species of migratory waterfowl that winter here.

Dive In
In November, sea temperatures remain relatively warm (about 71 degrees, down from a bathtub-like 86 in August) and underwater visibility actually improves. But if you’re not prepared to take the plunge, you can still glimpse what lies beneath the waves by visiting Northrock — a 140,000-gallon tank that recreates a living reef — at the Bermuda Aquarium, Museum & Zoo. Over at the Bermuda Underwater Exploration Institute you can ogle the world-class shell collection amassed by resident Jack Lightbourne, or visit the gallery here named for native-born undersea archaeologist Teddy Tucker to see the booty retrieved from some of the 300 ships wrecked in Bermuda’s treacherous waters.

Take Tea
If you should feel chilly, remember that nothing cuts the cold like a steaming cuppa — especially when it’s served in fine china. Like left-hand drive and judges’ robes, high tea in Bermuda is a cherished legacy of Britain’s long colonial rule. The ritual is observed between 3 p.m. and 5 p.m. each afternoon at finer hotels around the island, including Waterloo House and Elbow Beach. But no place honors tradition with more panache than the petite-four pink Fairmont Hamilton Princess. Served just off the lobby in the elegant Heritage Court, it boasts 14 varieties of tea (among them the private Princess Bermuda Blend) plus finger sandwiches, decadent pastries, and classic scones accompanied by clotted Devonshire cream.

Get with the Program
Bermuda is a particularly good deal right now because its dollar is pegged to ours at an exchange rate of one-to-one, so you don’t have to bother doing those pesky conversions or fret over the declining value of U.S. currency when making your purchases. Better yet, off-season travelers don’t have to worry about money at all if they take advantage of the Bermuda Heart & Soul Program, running from November 1 to March 31, 2008. Sponsored by the Department of Tourism, it is a series of daily activities, many of them free. Informative town tours, guided garden strolls, cooking and craft demos, even lectures on local culture are all on the schedule.