Deals Leila Najafi Attention West Coast: You Can Now Book Flights to Paris for as Little as $321
Home  >  News   >   The Best of Ireland

The Best of Ireland 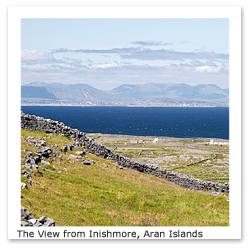 Check out the natural wonders and the manmade monuments, castles and villages of Ireland.

Natural Wonders
It’s not always easy to conjure up leprechauns and druids in today’s Ireland, but head to any of its famously brooding landscapes and those legendary times will seem like yesterday. With its romantic coastlines, wild bogs, and rugged seascapes, the Emerald Isle is especially rich in rugged, wildly gorgeous spectacle.

The Aran Islands, Galway Bay. The islands battle dramatically with sea and storm and now welcome droves of visitors who fall under the spell of their brooding beauty.

The Skelligs, Ring of Kerry. Be warned: these spectacular pinnacles of rock soaring out of the sea will haunt you for days.

The Burren, Co. Clare. A 300-square-km (116-square-miles) expanse that is one of Ireland’s strangest landscapes, the Burren stretches off as far as the eye can see in a gray, rocky, lunar landscape that becomes a wild rock garden in spring.

Cliffs of Moher, Co. Clare. One of Ireland’s most breathtaking natural sights, these majestic cliffs stretch for 5 miles. At some points, the only thing separating you from the sea, 700 feet below, is a patch of slippery heather. 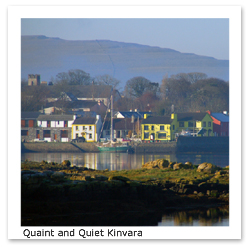 Most Beautiful Villages
Nearly everyone has a mind’s-eye view of the perfect Irish village. Cozy huddles filled with charming calendar cottages, mossy churchyards, and oozing with thatched-roof-pewter-and china-dog-atmosphere, these spots have a sense of once-upon-a-timefied tranquility that not even tour buses can ruin.

Kinvara, Co. Galway. This village is picture-perfect, thanks to its gorgeous bay-side locale, great walks, and numerous pubs. North of the town is spectacularly sited Dunguaire Castle, noted for its medieval-banquet evenings.

Cong, Co. Mayo. John Ford’s The Quiet Man introduced this charmer to the world and the singular beauty of its whitewashed single-story cottages with tied-on thatched roofs.

Adare, Co. Limerick. Right out of a storybook, this celebrated village of low-slung Tudor cottages is adorned with ivied churches and a moated castle from the days when knighthood was in flower.

Lismore, Co. Tipperary. Set within some of Ireland’s lushest pasturelands and lorded over by the Duke of Devonshire’s castle, dreamy Lismore is popular with both romantic folk and anglers (the sparkling Blackwater here teems with salmon). 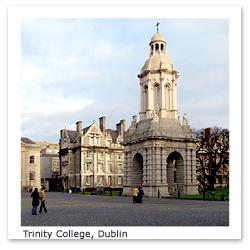 Literary Haunts
Irish literature developed its distinctive traits largely because of Ireland’s physical and political isolation. Yet the nation has produced a disproportionately large number of internationally famous authors for a country of her size.

Limerick City, Co. Limerick. Frank McCourt’s Angela’s Ashes has thousands heading here to tour Angela’s city and partake of the tearfulness of it all.

Sligo Town, Co. Sligo. Take in the town where William Butler Yeats grew up, then visit his grave in Drumcliff to view his beloved mountain, Ben Bulben.

Stateliest Houses
Ireland’s stately homes are either proud reminders of a shared history with Britain or symbols of an oppressive colonial past. If you’re interested in luxurious pomp and reliving the decadence of yesteryear, there’s no denying the magnificence of these country estates and lavish mansions, erected by the Anglo-Irish Protestant Ascendancy in the 17th, 18th, and 19th centuries. 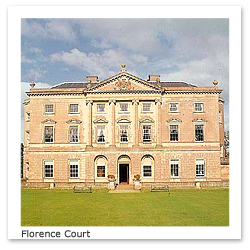 Castle Leslie, Glaslough, Co. Monaghan. The most glorious hotel in Ireland, period. Hard to say which is more beautiful: the 1870 Gothic and Italianate structure or the reflection of it in the nearby lake.

Castle Ward, Co. Down. An architectural curiosity, in that it was built inside and out in two distinct styles, Classical and Gothic — perhaps because Viscount Bangor and his wife never could agree on anything.

Florence Court, Co. Down. With magnificent Georgian-period stuccoed salons, this shimmering white mansion is strikingly set against the Cuilcagh Mountains where, legend has it, you can hear the “song of the little people.”

For more information about Ireland, check out our Ireland miniguides.