News Christina Mueller Yes, You Can Visit Los Angeles Without a Car. Here's How to Use the L.A. Metro Subway System
NewsI Survived St. Patrick’s Day in Dublin 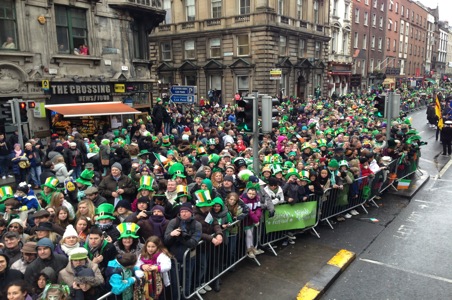 In the Great Plains town where I grew up, there wasn’t much in the way of Irish culture or history—it was more of a Scandinavian melting pot. But that didn’t stop us from throwing one heck of a St. Patrick’s Day party each year. We lined the main downtown street, often in freezing rain or snow, to watch the parade floats pass by and then—this was the important part—pour into the bars to get out of the cold and into a few glasses of green beer.

Turns out, thanks to the Irish diaspora, it’s pretty much like that anywhere you go on March 17th. From Buenos Aires to Boston, Montserrat to Moscow, Tokyo to Toronto—St. Pat’s is a huge deal. Still, there was no way I was going to pass up an invite for a weekend in Dublin, wearin’ the green and hoisting a pint with real, actual Irish people.

Thursday night: The connecting flight from Chicago to Dublin is oversold; bottles of beer are scattered on the floor at the gate as people pre-game before boarding. Let the fun begin!

Friday: As I’m headed to the hotel, my driver fills me in on the St. Patrick’s Day Festival. Until the1990s, the holiday was a one-day affair. But then the tourism people reasoned: if one is good, three or four are better, right? It’s that many more days to pump leprechaun gold into the local economy. Brilliant!

Friday evening, my friends and I head to The Church, a beautiful restaurant and bar that is, in fact, the restored St. Mary’s Church; Handel was known to have practiced on its organ here. Downstairs in the pub, we’re treated to a quick performance by Padraic Moyles and Niamh O’Connor, dancers with one of Ireland’s best-known exports, Riverdance. When you visit Ireland, it’s not a matter of if you’ll see some Irish stepdancing, but when. (An Irish friend told me that it wasn’t always so, that Riverdance’s breakthrough success in the mid-’90s is single-handedly responsible for its popularity today). Back upstairs for dinner, there’s live music and—what else!—more stepdancing. 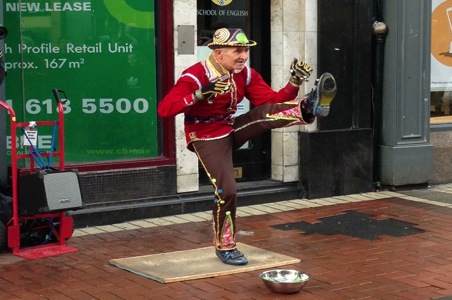 Saturday: The day before St. Patrick’s seemed like a perfect time for an afternoon visit to Grafton Street, Dublin’s main shopping thoroughfare and popular pedestrian mall. I wasn’t looking to do some damage on my credit card today; I was in search of some street performances and antics, and knew I’d find them here. The first stop was to watch an elfish-looking older man dressed in what appeared to be some kind of Celtic costume, dancing to a boombox. His best move was to slowly raise his straightened left leg nearly to his nose—something I couldn’t do on my best yoga day. For that alone I threw a couple of euros in his tip bowl. Farther down the road was a unicyclist juggling flaming torches, a DIY leprechaun photo op, and masses of revelers spilling out of the pubs and into the streets.

Dinner ended late, but walking home, we couldn’t help ourselves. Just around the corner from the hotel was the Hairy Lemon, a pub we’d been eying for the last day for its name alone. According to the story, the pub got its name from an ardent patron with a big bushy beard and a fondness for ale. But his love of the golden stuff led him to develop jaundice, which earned him the affectionate, if unfortunate, nickname of “the hairy lemon.” On his death, the pub rechristened itself in his honor. Inside we met a group of young lads who insisted on buying rounds. We came to our senses at 2:30 a.m. and headed to the hotel. 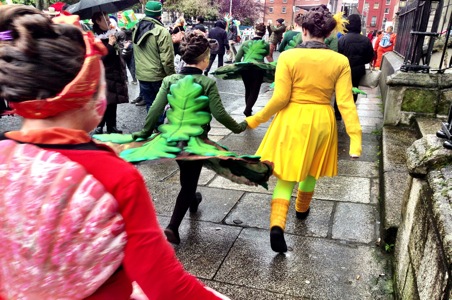 Sunday: It’s raining. Cold, and raining. We’re off to Parnell Square at 9 a.m. to gather at the Writers Museum—a tribute to the impressive literary legacy of Ireland—and then head out to the parade. As we walk, the rain begins to let up, but not the icy cold. Barely-clad samba dancers practice in the street before taking their place in the parade. I give an empathy shiver.

Then we board our double-decker bus and the parade begins. It’s cold on top of the bus, but the rain has let up. As far as we can see down the road, the streets are lined six and seven deep with parade-goers; above the street, families and groups of friends hang from windows and balconies. For nearly an hour and a half, the parade makes its way down O’Connell Street, marching bands following fantastical floats, following dancers and performers. 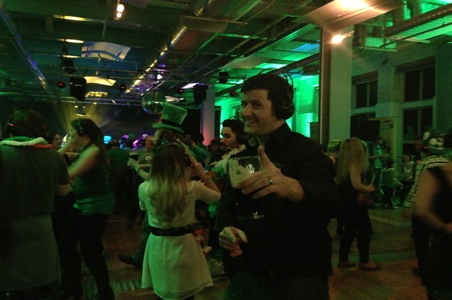 Then it’s off to the real party, at the Guinness Storehouse. The Storehouse, home of that renowned elixir and bread of Irish life, is the biggest tourist attraction in all of Ireland, with nearly 1 million visitors a year—and more than 8,000 on St. Patrick’s Day alone. The famous Gravity Bar on the seventh floor is a circle of glass that offers probably the best views of the Dublin skyline in all of the city. But today each floor of the early 20th century building is packed with people. On one floor the Dublin Fire Brigade bagpipe band is performing; several bands play on other floors; and on the sixth floor is the “silent disco,” where we put on headphones and dance to the music in our heads while shouting out the lyrics to a strangely quiet room. Then we’re off to our farewell dinner, as most of us are leaving the next morning, though I’ve decided to stay on a couple of extra days.

Monday, the day after: Sleep till noon.