I Surivived Riding a Float at Mardi Gras

I don’t need a good excuse to go to New Orleans. I would fly down to the Big Easy simply to eat a sandwich (preferably a muffuletta from Central Grocery). So when I was offered the opportunity to ride with Harry Connick Jr.’s Krewe of Orpheus during Mardi Gras, my answer was direct: Hell, yes. 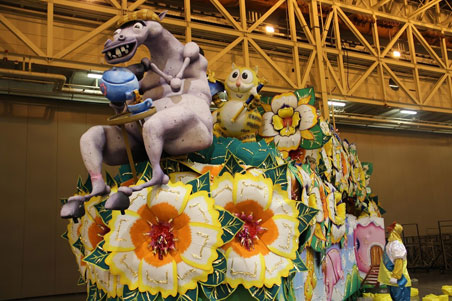 Riding a float requires more than just tossing beads between sips of booze, though. And it turned out that I had a lot to learn about Mardi Gras in general. Despite its name, French for “Fat Tuesday,” the Mardi Gras celebration in New Orleans is more than just one day. It encompasses an entire season of parades—53 of them in fact—with over 1,000 floats and 135,000 participants. The season of revelry, which starts on the day of Epiphany (January 6), can last up to two months. Ash Wednesday is the official end to the party, when revelers are expected in church to atone for their sins, most of which likely occurred over the past few weeks. 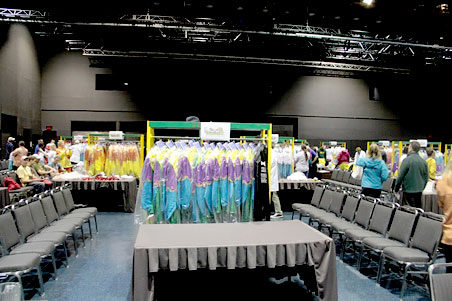 I was also clueless as to what exactly a “krewe” was. Krewes are the secret societies that put on these elaborate parades. While the first NOLA krewe dates back to 1857, the Krewe of Orpheus was founded in 1993 by the Harry Connicks—Senior and Junior. It’s a large, music-themed “super krewe” with over 1,000 members parading on the Monday prior to Fat Tuesday, otherwise known as “Lundi Gras.” Named for the son of the Greek muse Calliope, Orpheus’s annual parade is one of the most highly anticipated because of its 36 ornate floats and celebrity monarchs. This year, Gary Sinise served as monarch along with his royal court, which included Mariska Hargitay, Nick Cannon, Trombone Shorty, and Tillman, the world’s fastest skateboarding dog. 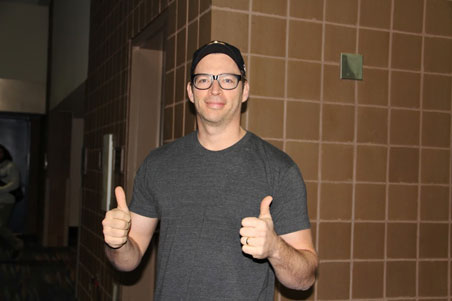 After educating myself, I felt ready when I arrived at the expansive Morial Convention Center. But I still wasn’t quite prepared for the experience that ensued. I was sent to the “valet” area to claim my costume. A brass band provided the soundtrack as I slipped on enormous purple satin pants and a white-and-purple satin tunic, its puffed sleeves festooned with purple and gold sequins. Gilded fleur-de-lis decorated the tunic, which also sported a proud “Orpheus” sash. A purple sequined cowl and shiny red mask provided the finishing touches. I looked like an obese medieval harlequin. But the building momentum and buzz of anticipation throughout the hall dampened any concerns of vanity…until Harry Connick Jr. came out to welcome us, not yet dressed in his costume, and looking as if he stepped out of a portrait gallery of adorably casual musicians. And with a generous dose of down-home charm, he assured us that the gray sky outside wasn’t going to ruin our parade. “Rain or shine, we are going to party like we always do!” he said, my heart fluttering inside my oversized costume. 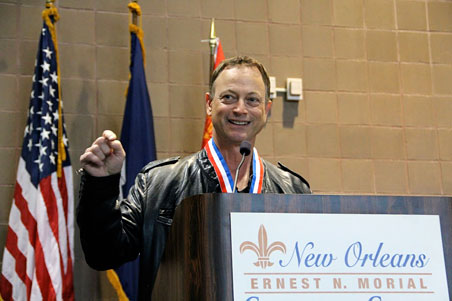 Then Gary Sinise broke the ice further. When presented with a medal for his work with New Orleans’ National WWII museum, he cracked that he “never got an award in front of a bunch of clowns before,” before announcing that this was his first Mardi Gras. I was glad to know that I was not the only virgin in the krewe.

But as impressive as the celebrity monarchs were, nothing was quite as awe-inspiring as the floats. They filled a vast, hangar-like area, with some stretching hundreds of feet long. They were fronted by mermaids, tigers, pirates, and various other colorful mascots. The Smokey Mary, the lead float, was fashioned as a six-car steam locomotive, and the Dolly Trolley is the original horse-drawn carriage that pulled Barbara Streisand in Hello Dolly. There was a massive Trojan horse, whose “warrior” riders looked much cooler than us clowns. Our float, the last of the crew, was fittingly called “Nonsense and Tomfoolery,” fronted by a jackass and a corpulent cat. 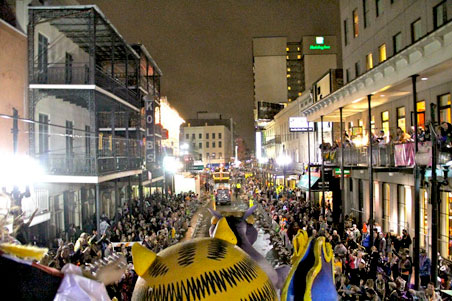 The 49 of us riding on “Nonsense and Tomfoolery” instantly got to work unpacking our “throws,” zillions of beads, in every color of the rainbow, and giant bags of plush toys—puppies, bowling pins, snakes, footballs—to toss out to kids. A staggering amount of booze was loaded on as well—whiskey, vodka, tequila, beer, Jell-O shots, you name it—to tide us over for the 7 hours we’d be on board. That’s when I was relieved to learn: these floats have toilets. Ours had four, in fact. They were glorified Port-a-Potties, but toilets, no less.

I also learned that this seemingly lawless city had strict rules—actual laws—when it came to parading. Float riders, for example, are required by law to be masked at all times. And law prohibits throwing “insects, marine life, rodents, fowl, or other animals, dead or alive.” I decided I could live with those parameters. 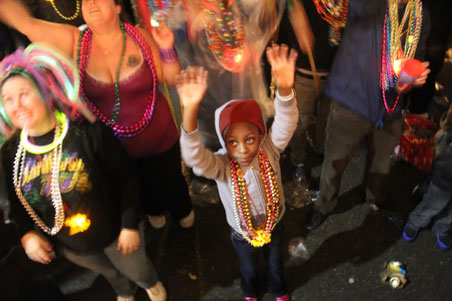 The momentum and anticipation built until tractors hitched up to the front of our floats and pulled us out into the streets. And the bontemps did indeed rouler as we moved into the Uptown neighborhood. Interesting factoid: float parades have not rolled through the French Quarter since 1973, when the city deemed the streets too narrow for the expanding floats and growing crowds. Another misconception cleared up: boobs for beads are only for Bourbon Street. The Krewe parades through town are G-rated affairs, packed with spectating families.

Over the next several hours, I felt exactly what it must be like to be a rockstar, as crowds constantly screamed and cheered at us for throws. And despite my working through a cooler of Abita beer, the real buzz I caught came from the crowd. There’s nothing quite as electrifying than making eye contact from behind a mask, and forming a connection with a stranger in the crowd. The smiles, the energy, the sheer joyousness of live interaction is something that I often forget about once I pick up my Smartphone or hide behind a computer screen. 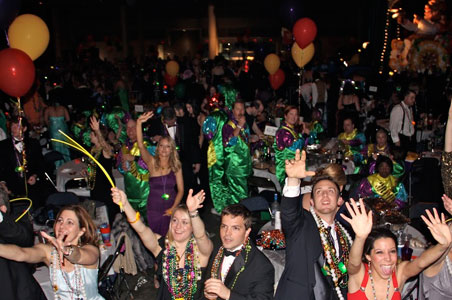 For the grand finale, we rolled back into the convention center, nearly an entire workday after we first piled onto the float. There, we drove right into the krewe’s ball—”Orpheuscapade,” where guests in their best black tie attire greeted us just as wildly as the masses in the streets. Our job done, we hopped off the floats, grabbed some food (parading makes you hungry!) and settled in as Harry Connick Jr., Trombone Shorty, and Gary Sinise and his Lt. Dan Band serenaded us into the wee hours.

This tired clown called it a night before the ball ended at 3 am. A whole new day of revelry awaited on Mardi Gras morning, after all.