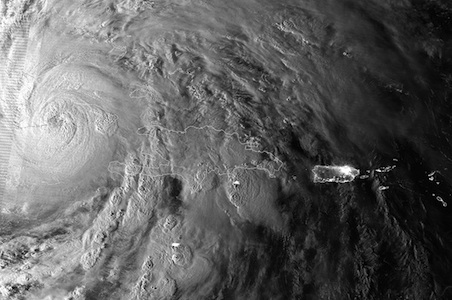 Hurricane Sandy is bearing down on the Mid-Atlantic coastline of the United States. The storm is massive, with Tropical Storm strength winds reaching up to 500 miles from the center. And so, even with the storm hundreds of miles off-shore, the impact on travelers is being felt from Virginia up through New England.

For airlines the reaction to Sandy was generally a consistent one: shut everything down. Nearly every carrier has ceased operations on the east coast. Nearly 9,000 flights have been cancelled due to the storm through Monday. Thousands more are expected to be canceled on Tuesday as well, depending on the ultimate path the storm takes.

A couple airlines have been more public than not about their storm preparations. JetBlue has published a blog post outlining what they’re doing with their airplanes during the storm, for instance. Most are being moved out of the path of the storm, based at other airports until the system passes. The carrier expects to resume flights in and out of New York City on Wednesday at the earliest.

For United Airlines the storm means clearing out two hubs on the east coast, along with other airports in the storm’s path. As of Sunday night the carrier expected to have no aircraft on the ground at any of the major airports between Washington, DC and Boston. Operations are expected to resume in the Washington, DC area around mid-day Tuesday and no earlier than Tuesday evening in the New York City area.

Change policies from the airlines vary though all are waiving change or cancelation fees where flights are canceled. For flights not yet canceled some airlines are waiving all fees while others are only allowing for free changes if the flight has been taken off the schedule. Some are allowing changes well out into the future while others are limiting the fee-free change dates to just the next few days. Anyone with travel plans should check the website of their operating carrier to determine what changes are permitted to their tickets.

While the airlines are mostly shut down in the area only a couple airports are actually shut down so far. Atlantic City is the most significant airport shut down thus far. It is possible that the storm surge will swamp the runways in some areas—LaGuardia runways would be underwater with a four foot surge—causing airport closure and possibly extended service interruptions.

The overall impact of the storm is already significant. And we’re just getting started.