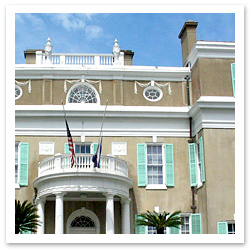 North of New York City, the sprawling green Hudson Valley has long held a certain cachet with the city’s elite, as the summer “cottages” of the Rockefeller, Roosevelt, and Vanderbilt families well attest. But as museums, performing arts centers, and a stunning culinary scene have taken hold here, overheated urbanites have begun looking north for a different kind of escape.

This two-day itinerary lets you take in some of the region’s best spots, with an overnight in the rapidly transforming town of Hudson. But with Amtrak and Metro-North serving much of Columbia, Dutchess, and Westchester counties, visitors can easily break this up into a series of weekend day trips to last the summer. Pack light, and enjoy.

Begin on a Saturday morning by bolting north, driving in one shot all the way up to Hyde Park, the site of summer “cottages” of the Gilded Age. The elegant, 54-room Vanderbilt Mansion is open for daily tours, but we chose instead to spend our morning at the Franklin D. Roosevelt National Historic Site, (photo, top) which includes both his family’s modest mansion, “Springwood,” and the presidential library, once the site of his radio addresses.

A tour of the Roosevelt family’s house takes visitors behind the scenes of the president’s complicated family life, while also showing signs of his physical struggle with polio—witness the hand-pulled elevator he installed to convey himself to the mansion’s second floor. Close at hand, the presidential library, the first of its kind, now functions as a museum, with childhood portraits and documents covering both his official and private life. At one end of the museum, a separate room is dedicated to his wife Eleanor’s life and works. (Her separate cottage, Val-Kill, just a few miles away, is currently under construction but due to open again this summer.)

Nearby in Hyde Park, the East Coast campus of the Culinary Institute of America occupies the former Jesuit Novitiate of Saint Andrew. (Its Western sibling is based in California’s Napa County wine country, at Greystone Cellars, the former home of the Christian Brothers winery.) Although the institute is closed for tours on weekends, two of its five public restaurants are open on Saturdays; be sure to make reservations well in advance. 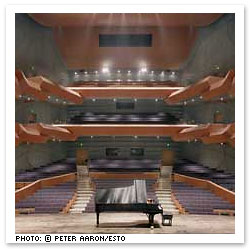 For a refresher after lunch, sample either the beers of the Hyde Park Brewing Company, across the street from the Roosevelt estate, or the wines produced along the Dutchess Wine Trail before heading north toward Hudson.

Architecture fans should be sure to detour to Annandale-on-Hudson to check out Bard College’s Richard B. Fisher Center for the Performing Arts, (photo, right) a swooping performing arts space designed by architect Frank Gehry. Tours are only offered during the week, but even a walk around the premises is worth the stop.

End your day at the town of Hudson, a onetime whaling port that now has a funky shopping district and thriving antiques trade. Wander up and down Warren Street to check out the town’s boutique and gallery scene, and then stop for dinner at one of the local eateries; our favorites are Mexican Radio, Swoon Kitchenbar, and Red Dot (321 Warren St.).

Spend the night at the perfectly lovely Hudson City B&B, a circa-1865 home with a big porch and a garden—great places to unwind after a day of touring. 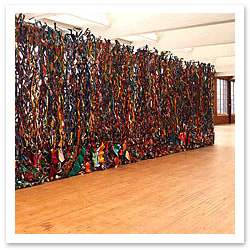 Start your second day by driving south (roughly 65 miles via the scenic Taconic State Parkway) to the Dia: Beacon, (photo, right) the sprawling modern art museum on the banks of the Hudson River. Opened in 2003 by the Dia Art Foundation, the former printing plant (once owned by Nabisco) houses the oversized works of the Dia’s permanent collection in almost 300,000 square feet of spacious, skylit galleries.

The new institution is perhaps best known for its monumental Richard Serra installations, particularly the three incarnations of his sinuous steel Torqued Ellipsis and a spiraling fourth structure, 2000, which are housed in a train shed at the building’s western edge. But the building’s other highlights include an enormous gallery lined with Andy Warhol’s Shadows, polychromatic variations on a single theme; the negative geometric space of Michael Heizer’s North, East, South, West; Bruce Nauman’s 100-Fish Fountain; and Louise Bourgeois’ menacing Spider.

After lunch in town or at the Dia’s tasty cafe, sculpture lovers may want to cross the river to visit the expansive Storm King Art Center, just south of Newburgh on the far side of the Hudson. The relationship between art and nature is a focus of the center. Expect to see large abstract post-war masterworks by, among other artists, Alexander Calder, Henry Moore, Louise Nevelson, Isamu Noguchi, and Andy Goldsworthy stretch out across the rolling hills. Trams ferry visitors through the sprawling campus, and a series of walking trails also cuts through the landscape.

Alternatively, continue due south from Beacon for about an hour to the Tarrytown/Sleepy Hollow area, famously home to both Standard Oil founder John D. Rockefeller and writer Washington Irving (of Rip Van Winkle and Headless Horseman fame). 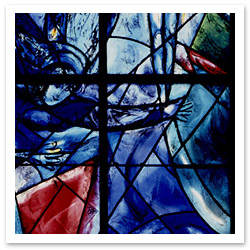 Guides dress in period wear to show off Sunnyside, Irving’s modest house and grounds, perched romantically above the Hudson River. The charming setting stands in contrast to Rockefeller’s grand estate, Kykuit, home to four generations of the family. The multiple tour options include the gardens, the modern art collection, and the six-story mansion itself. (Reserve in advance if you have your heart set on a particular tour.)

Before you head back to the city, even if you’re all mansioned out, don’t leave the area without a visit to Union Church, (photo, right) a jewel box of stained glass in nearby Pocantico Hills. Built in 1921, and supported by the Rockefeller family’s largesse, the stone church has acquired a series of nine moving glass works by Marc Chagall, including a large arched window depicting the story of the Good Samaritan, as well as a small Matisse rose window.

More from the Travel Wire: