How to See Montreal by Bike 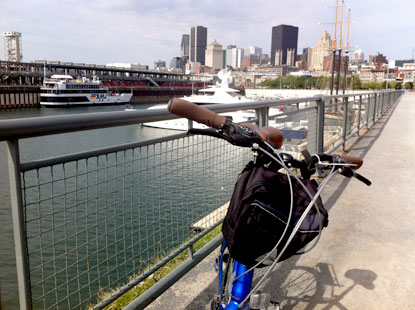 Before tumbling snowflakes turn Montreal into a sparkling winter wonderland, there’s still time to explore Canada’s second largest city on two wheels. Armed with the most impressive bike network in Canada, over 373 miles of pathways reach along the Saint Lawrence River, into the city center, and up a (small) mountain. So you’re not distracted by the poutine (a local specialty where fries are topped with cheese curds and gravy) outposts on every street corner, we’ve hand-picked the best spots to cycle in the City of Saints; lycra not required.

Navigating the safe and sprawling side streets at a pedaling pace during autumn lends itself to a gallery-like experience outside the confines of four white walls. Everywhere you cycle, expressions of natural art abound: red oaks turning a shade of this season’s hottest deep, burgundy, and Canadian maples sporting a fruit bowl of color. Couple these once-a-year hues with ideal temperatures for city cycling—not hot enough to sweat, not cold enough to freeze—and everyday clothes are au courant attire.

As you might expect, finding a set of wheels to explore Canada’s most bike-friendly city is as simple as looking around. Montreal was the first city in Canada to adopt a highly-regarded (and now exported) bike-sharing system using locally made bikes. Bixi, a name conceptualized mixing "bike" and "taxi", first hit the streets in 2009, and has grown to include 5000+ bikes that can be checked-in and out of 411 stations scattered throughout the city. The system is so widely used; many Montrealers have given up four wheels for the convenience of two.

Insider Tip: Riding a Bixi is great if you’re able to check your bike into a station every 45 minutes, but if you want to go for a laissez-faire half- or full-day cycle, renting a bike from a shop like Montreal On Wheels is a more cost-effective means of a leisurely cycle ‘o the city.

What to See on Two Wheels 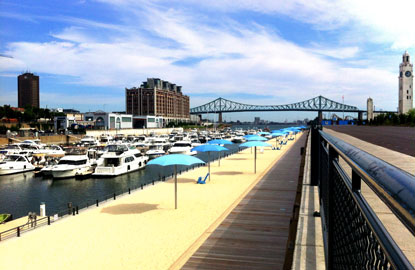 Start in Old Montreal where you can choose a bike from multiple Bixi stations or rent one from Montreal On Wheels (full-day rentals from $25). Cycle along the Old Port’s riverfront toward the Jacques Cartier Bridge until you reach Montreal’s urban beach—inspired by Paris’ Seine-side beaches—a white-sand oasis studded by baby blue umbrellas and Adirondak chairs.

Once you’ve taken a gander at the beach and mega yachts moored at its shorefront, make an about-face and follow the Saint Lawrence River toward the Lachine Canal until you reach Atwater Market. Overflowing with stalls of syrup tapped from local maple trees (you can’t visit Montreal without bringing home some Canadian maple syrup), in-season fruits, and Quebec cheese, take a moment to behold the hustle and bustle of one of Montreal’s oldest public markets with a cafe au lait and a fresh-baked croissant. 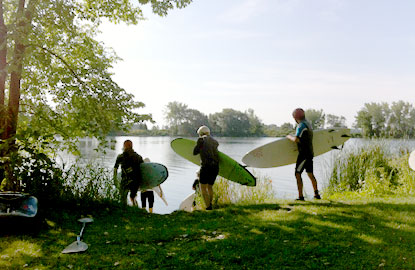 Habitat 67 and the Saint Lawrence Surfers

Pumped full of caffeine, pastries, and one too many maple syrup samples, back-track on the other side of the Lachine Canal to Habitat 67, an iconic housing development resembling a lego-built structure, built for Expo ’67. While there, park your bike on the grass beside it, and bushwhack (trust us, it’s worth it) along the narrow path leading to one of Montreal’s most popular surf spots to see how locals ride the river’s perfectly-rounded and rushing waves. 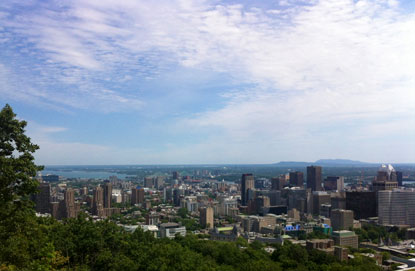 Finally, head for the hills. Mont-Royal is the tallest point in city—and city planners intend to keep it that way ensuring no city building exceeds its height—offering the most far-reaching vantage point of the gently sloping cityscape. From the river, it’s a steady climb along the urban bike paths to the hill’s base. Once inside the park, a forested, gravel trail (originally a carriage way) gradually climbs close to 51 storeys. 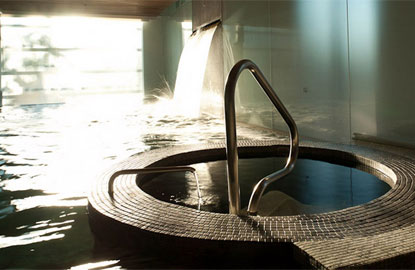 What goes up must come down, so once you return your bike in Old Montreal, spend the rest of the afternoon soothing tried muscles at the spa. Housed in a traditional stone-build structure, visit Scandinave Les Bains for a few tours of its hot-cold-relax hydrotherapy circuit known for boosting the immune system and invigorating tired muscles.

Check out this (slightly wine-soaked) tour of Sonoma by bike, or hit the South with a bike tour of Savannah.