Beaches Kaila Yu Do You Enjoy Visiting Hawaii? You Should Pay a Fee
Home  >  News   >   How to Save on Holiday Travel, From an Expert

How to Save on Holiday Travel, From an Expert 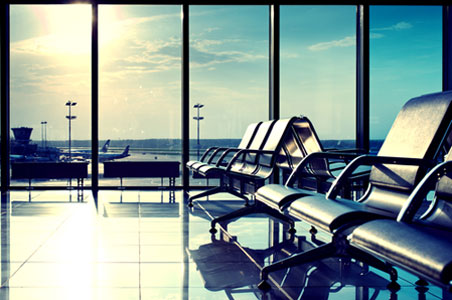 Holiday travel season is nigh, and even those of us whose wallets open to nothing more than moths and the odd mint, ’tis the season for family get-togethers as obligatory as that ham. So to help you, and frankly us, out, we contacted Gabe Saglie, senior editor at Travelzoo, for his expert advice on getting the most holiday travel bang for your buck.

Unfortunately, according to Gabe, holiday travelers have their work cut out for them. "Airlines are being increasingly stingy with the number of seats they make available," says Saglie. "They’re flying these planes fuller and fuller." Saglie has seen loads creep as high as 90% or more as airlines begin flying smaller planes and eliminating routes, and thus "keep a cap on the number of available seats out there."

And we all know what happens when demand begins to match or exceed supply right? Don’t fret! There are some things you can do to save on holiday airfare:

1. Book early. While Saglie admits that prime time for Thanksgiving fare sales may be behind us, it’s not too late to shop around for a couple last minute sales for Turkey Day. And there’s no better time than now to start shopping for Christmas…for plane tickets, that is. Get on the ball early and chances are you’ll pay less.

2. Ok, so you procrastinated and now flights are either booked up or ticket prices have skyrocketed. Don’t panic. I said, don’t panic! Saglie suggests expanding your window of travel to capitalize on deals. "Thursday morning of Thanksgiving, airfare can be considerably less expensive," he says. "The day of is generally a value day to fly." According to what Saglie and his colleagues have seen, prices peak on the Wednesday before Thanksgiving, drop on Thanksgiving and the day after, begin to rise again on Saturday, peak on Sunday, and then drop again. "Flying on the Tuesday after instead of Sunday can save you 50 percent or more," Saglie says. And, hey, showing up day of means you get roped into less cooking and cleaning! 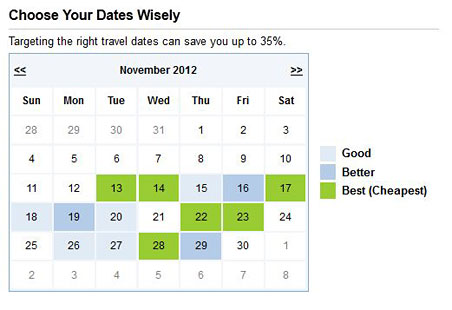 3. Mark the calendar! Travelzoo has just launched its fare calendar, which lets you compare flights over an extended period of time to find the best price and capitalize if you’re flexible on travel dates. And it beats doing individual searches for different dates. If you’re loyal to one particular airline, most have their own version of the fare calendar on their websites.

4. Check alternative airports. Flying from Los Angeles? Before you book a ticket out of crowded LAX, look around. "There are close to a half-dozen other airports in a very drivable distance," Saglie says. And these airports are often serviced by low-cost carriers. Yes, you’ll need to do the math and see if a cab ride, one-way rental, or other means of getting to the gate will still keep you in deal zone, but you can save some significant money, he says, by flying out of or into an airport slightly off the beaten path.

5. "Another pretty effective tool to consider is overnight flights," Saglie says. True, no one clamors for a red-eye, but that means seats on these flights are open and fares are lower. Plus you’ll be so pumped up on tryptophan, you’ll sleep like a baby regardless.

6. Add a stop. You heard right. Save some money by adding one or two stops to your flight. It’s a risk during a season of winter storms, says Saglie, but "one stop or two stop flights can sometimes be dramatically less expensive." And you can prep for all that gorging with our list of healthy apps for layovers!

7. Not traveling for the holiday this year? Saglie recommends taking advantage of the "screeching halt" in business travel over the holidays and exploiting the low, low hotel rates in the financial districts of cities like New York and Chicago. Swank it up in a suite for less.

8. Looking for some international fun? Well, since European countries don’t celebrate Thanksgiving (I know, I was shocked, too), fares over the pond drop significantly during that time. Start hunting now, and you might be enjoying pasta and the other kind of football over the break.

9. And finally, "there is that sweet spot between Thanksgiving and Christmas, from November 28 to December 10," says Saglie, when "availability is rampant. Even popular destinations in Orlando and resorts like Disney are slashing rates by 30 to 35 percent. There’s a lot of good value there because people aren’t traveling in the kind of numbers that we are about to see come the holiday season."

And there it is, Fodorites—savings that help you eat your turkey (or ham or steak) and fly there, too. Get to searching!