Coronavirus Leila Najafi Want to Stay in Costa Rica for Over a Year? A New Law Might Help You
Home  >  News   >   How to Get Reimbursed for Delays and Cancellations

How to Get Reimbursed for Delays and Cancellations 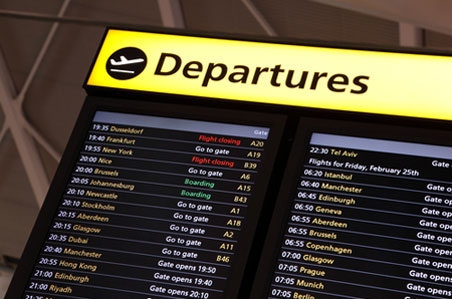 American Airlines has been making headlines as labor and maintenance issues caused 430 flights to be delayed and another 53 cancelled in the past week—largely on flights in and out of Dallas/Fort Worth International. Besides waiting in long lines to reschedule, many passengers had to pay for unexpected meals, overnight stays, and/or transportation.

Will they be reimbursed? Depends what kind of traveler’s insurance they carry—and, sometimes, what credit card they used to pay for the flight.

While American had a particularly bad week, they’re not the only culprit. Southwest Airlines had 276 flights delayed last week, according to FlightStats.com. Altogether, 1,839 flights were delayed and 120 canceled in the U.S. last week, and another 3,773 were delayed in Europe. If you ended up with one of these ill-fated fares, were you covered?

World MasterCard covers trip cancellation up to the cost of the trip, but not expenses incurred by delays. Members of American AAdvantage frequent flyer program who paid for those cancelled American flights with the AAdvantage MasterCard won’t get any help on expenses caused by those 430 delayed flights. Trip cancellation insurance covers trips cancelled by the passenger, prior to departure, due to death or illness. Passengers may have better luck hitting up the airline for expenses caused by a flight the airline cancelled.

American Express allows you to purchase add-on insurance for both delays and cancellations as an add-on. Premium cards, such as the American Express Platinum cover both, but you have to pay a $450 annual fee for the privilege. (Platinum comes with a whole lot of perks, so can pay for itself if you travel a lot.)

Dedicated traveler insurance covers delays and cancellations. If you do travel a lot, it might be worth paying for dedicated traveler insurance. Most policies reimburse you $100 to $150 a day for taxis, meals, lodging, and other expenses incurred because of a flight delayed by storm or strike. Some policies also cover pre-paid reservations missed because of the delay. Some, like Travel Guard and Savvy Traveler, allow you to purchase coverage for individual flights. But if you’re going to pay $200 annually for insurance, it might be worth investing instead in a premium credit card that also earns you free travel and VIP treatment—airport lounge access, expedited security and boarding, etc.

Elite members get special treatment. If you’re an elite member of an airline (flying 25,000 miles or more a year) you have more leverage with flight delays. According to WSJ, American Airlines recently emailed AAdvantage members, promising alternative flights if passengers discovered, on the day of departure, that they would arrive more than an hour later. American’s website promises the same to other passengers facing a delay of two or more hours, offering standby seating on earlier domestic flights, full refunds if passengers cancel trips, and flights on other airlines or changes to American flights free of charge.