Hotels & Lodging Laurie Lyons-Makaimoku 12 Hawaiian Hotels That Give Back to the Local Community
PHOTO: Courtesy of Marriott International

The hotel giant is transforming its lobbies into “modern-day public squares.”

No guests have checked into the Sheraton Phoenix since March of last year, but the hotel hasn’t sat idle. When travel paused in 2020 due to COVID, the 1,003-room tower seized the chance to speed up renovations that signal a change not just for the Phoenix property, but for the Sheraton brand as we know it.

Now, the bandages are finally coming off.

“I feel like I get to let people in on a secret,” Jon Erickson, the hotel’s Director of Sales & Marketing, says from inside the pristine, deserted lobby. This hotel is one of six test models, or prototypes, in an ambitious $1 billion campaign to transform the entire Sheraton portfolio. When it reopens on May 1, guests will finally get to see what all the fuss is about.

Of course, if you’ve been paying attention, it’s not much of a secret. Word of a “Sheraton 2.0” began circulating in June 2018, when Marriott, Sheraton’s parent company, first announced plans to overhaul the legacy brand. They certainly had their work cut out for them. The vermillion, laurel-wreathed Sheraton logo is instantly recognizable, yet most associate the 84-year-old chain with bland, frumpy furniture and tedious conferences (a New York Times reporter called it “the epitome of the beige hotel”). Sure, everybody knows Sheraton. But is it a place they want to stay?

Evidently, the executives at Marriott decided that to relaunch Sheraton, they would need to play to its greatest strength: its size. Sheratons, if nothing else, are huge. You’ve seen them next to airports, along the Chao Praya River, and tucked inside palm groves in Puerto Vallarta; and though they vary wildly in appearance (more on that later), they’re impossible to miss.

That kind of scale certainly has its disadvantages (think of the laundry bill, for one). But when it comes to personalizing something as unwieldy as a 1,000-room hotel, a logical starting point is the lobby. Not only is it the first thing you see upon entering, but it’s also a versatile, sweeping (often underused) public space. Fix the lobby, and you’ve effectively altered the look and feel of the entire hotel. 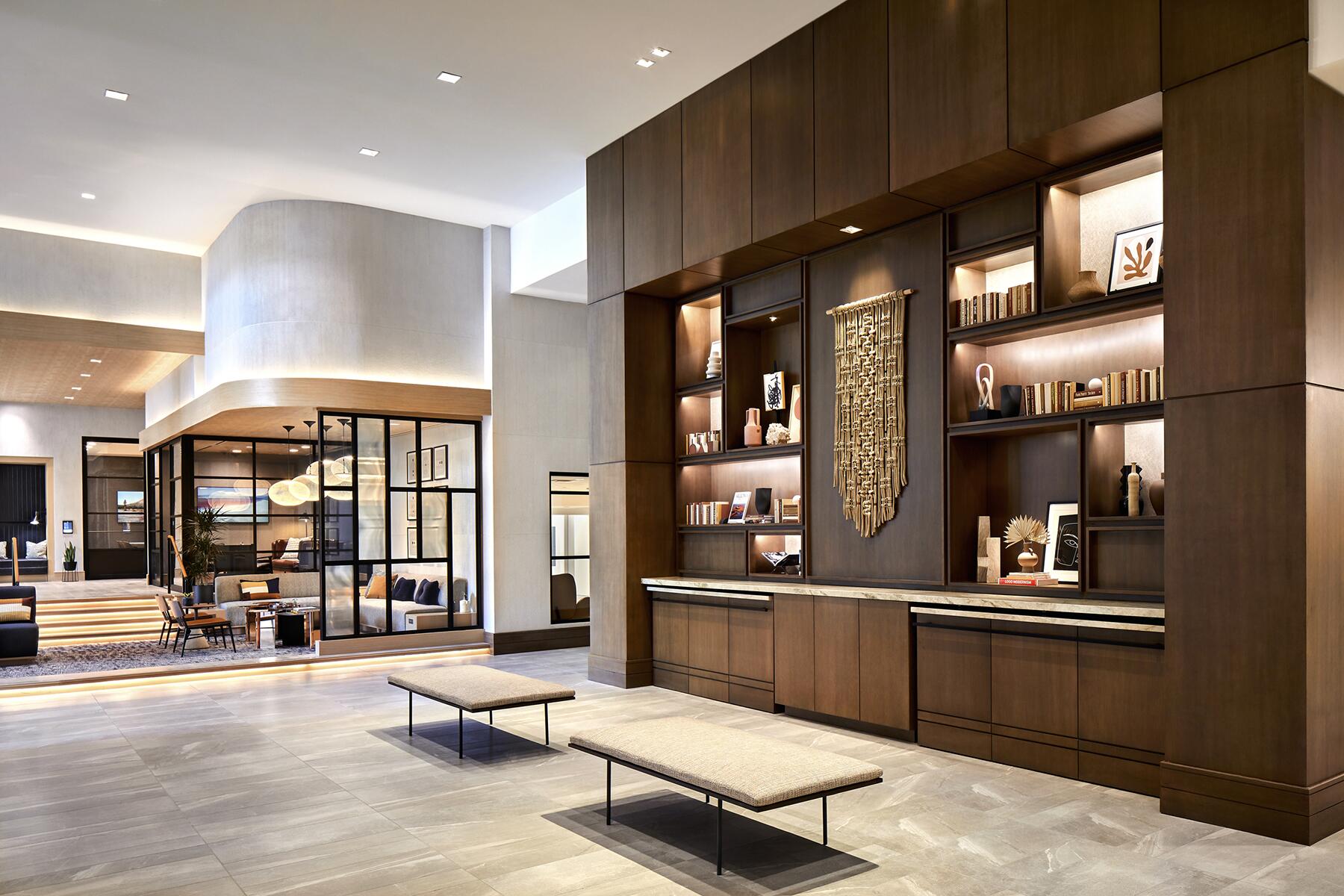 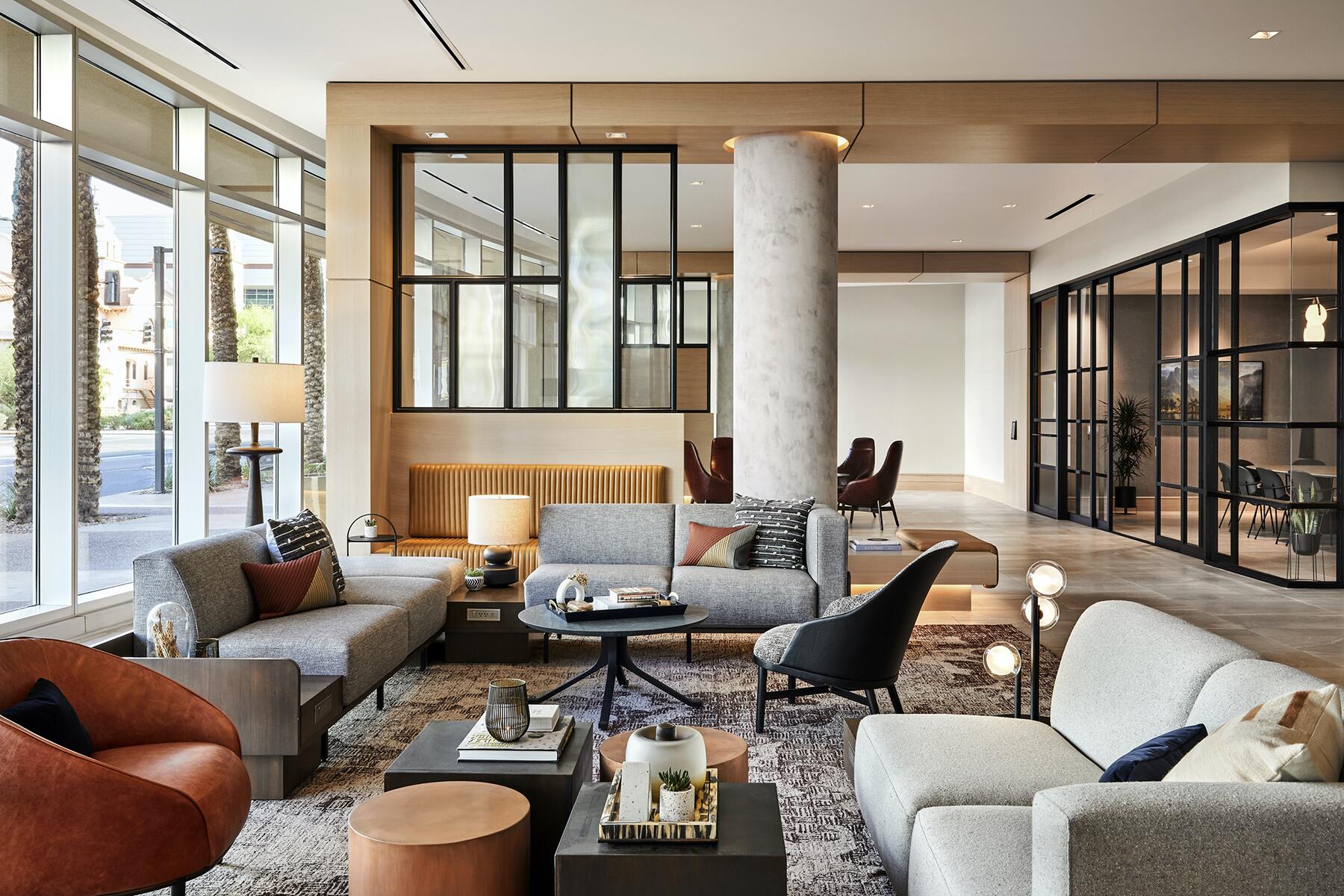 Only one problem: the grand unveiling is happening at the tail end of a global pandemic. Sheraton has likened its new lobby to a “modern-day public square,” positioning it as the centerpiece of redesign efforts, and calling it a “holistic, open space that invites people to join together.” But are travelers ready—or willing—to mingle?

“It’s all about space,” Erickson answers.

For anyone who stayed at the Phoenix hotel before 2019 (when renovations started), the change is striking. Seating capacity in the lobby has nearly tripled to 500. The dark wood panels, heavy Jerusalem stone, and velvet drapes have been replaced with soaring columns and vast, light-filled rooms that invite movement. There are long communal tables, dozens of small nooks, and an additional 25 seats at the bar (all equipped with wireless charging stations). Modern and unobtrusive, the space feels more like an airport lounge than a traditional lobby.

Sheraton is switching tack, by cramming as many people (paying guests or otherwise) as they can into the ground floor.

And just like at an airport, you can eat (or drink) around the clock. Typically, in big chain hotels, there was a timetable for meals: breakfast from 6 a.m. to 10:10 a.m., lunch from 10:30 a.m. to noon, and so on. But now, in a move to attract travelers who don’t like to feel constrained, there is no schedule. When you’re hungry, just pull up a menu on your phone, and order food to wherever you’re sitting in the lobby. The hope is that this method of contactless, on-demand dining will allow social distancing, too.

Autonomy—being able to do whatever, whenever in the lobby—is clearly a priority for Sheraton as it seeks to remove barriers to its public spaces. It also goes hand in hand with another big change: the staff actually wants you to be there.

“We were notorious for asking people, ‘Are you a hotel guest?’” laughs Tony Dunn, the General Manager at Sheraton Denver, another prototype. “We used to shoo people out of the lobby.” Now, Sheraton is switching tack, by cramming as many people (paying guests or otherwise) as they can into the ground floor. Surprisingly, it’s taken this long for a travel entity like Sheraton to figure out that lobby loitering might actually be good for business.

As far as seating goes, there are options. New Sheraton lobbies will feature glass-enclosed, soundproof “studios” that offer the privacy of a meeting room, without the hassle of traveling to a different part of the hotel. “It’s really about keeping people in the lobby,” Dunn explains.

This idea of the lobby as a social hub is by no means new. In 2009, when the Ace Hotel opened its second property in New York, you practically had to fight someone to snag a seat on the elusive Chesterfield couches opposite the check-in desk. The lobby became a stage for concerts, pop-up galleries, and poetry readings (I once dated a tarot reader who went table to table at One Hotel in West Hollywood). But this communal, recreational setting was far less common at big convention hotels. By shifting the focus to its public spaces, Sheraton is making an open bid for millennial travelers, who eschew formality for convenience, and prize flexibility above all.

“People want to be around people,” notes Dunn, echoing a refrain we’ve all heard a lot since the pandemic started—namely, that we’re social creatures, designed to interact and be around each other. Just like in a hotel, you can’t stay locked up in your room forever. And in a place with as many resources as a 1,000-room Sheraton, why would you want to? You didn’t board a plane for the first time in 12 months just to enjoy more solitude.

Of course, these changes won’t add up to much if they’re not part of a coordinated effort. With 446 hotels scattered across the globe, it will take some time to go from prototype to standardize. “Consistency is key,” says Erickson. In other words, the biggest hurdle Sheraton faces is getting people to look forward to walking through those revolving doors, every time. Because once the novelty of a lively, inviting Sheraton lobby has passed, the hope is that it won’t be that newsworthy at all.

So glad the lobbies will be up-to-date and beautiful.  I stay at a hotel to sleep and I don't really care about the lobby.  In all this promotion, no word about upgrades to the sleeping accommodations.  Really?   Probably same old drab rooms.