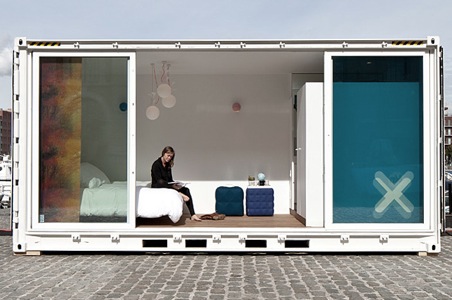 Sometimes it’s here, sometimes it’s notâ€¦ There’s nothing like a little mystery to spur a full-on travel obsession. Pop-up hotels are joining the ranks of temporary restaurants and stores, and you can find them in the most surprising of places. Here are a few ways that you can pop into a traveling hotel and see what all the fuss is about.

Stay with us on this one: Yes, these are 20 square foot storage containers. But Sleeping Around‘s modules, which currently travel in a caravan to different locations across Antwerp, are outfitted with everything an adventurous hotel guest could want. A surprisingly large bed and rain shower nestle in easily, and each "room" is outfitted with air conditioning and an iPod dock. The entire outfit is made up of six units, including four guest rooms, a breakfast lounge, and a sauna (which is still in the works). The cheekily-named hotel is also available for private rental.

Great for traveling back in time and enjoying the great outdoors too, The Pop-Up Hotel‘s super-luxe tents are springing up all over the place. Accommodations—inspired by the owners’ background in Caribbean property development—combine glamour and the romance of sleeping outside. You’ll spot them at a bunch of UK festivals and sporting events in 2013, including the Tour of Wessex and the Glastonbury Festival, where you’ll be able to stay right by the action rather than retiring far away for the night.

The hotelier’s second temporary hotel in Mykonos, Greece, is closed for the season, but come May, it will join its predecessor in Tulum, Mexico as a leader in luxury pop-up hotels. Both sites stress the importance of communing with nature and enjoying the simplest joys of a beach vacation—the creators describe Mykonos’ San Giorgio Project as "designed for those who seek simple pleasures like waking up to views of the sea, sharing good food prepared with love and care, and feeling the euphoric energy of a crowd dancing under a starry sky."

Popping Up Within Hotels

You’ve arrived in DC for the inauguration, and you realize—oh no!—you’ve forgotten something crucial for your Big Day outfit. No worries, because pop-up shops opened in hotels across the city for just this reason. Inauguration Weekend brought Montblanc and Neiman Marcus to the St. Regis, and Saks and Bloomingdale’s to Ritz-Carlton, all for the purpose of making sure inauguration guests would be fully outfitted for the memorable occasion. Keep your eyes open for these pop-ups, as the growing trend will become increasingly present at major events in the future.

Tribeca’s Duane Street Hotel will upon their doors to journalists across the city for New York Fashion Week this year with their annual Bloggers Lounge. The pop-up resting spot will provide beauty consultations, a Kembrel store, and designer appearances for RSVP’d bloggers. If you’re in NYC this weekend, watch for relieved fashion and beauty writers relaxing in the temporary lounge.