Pullman Hotel Opens in London, is a Train Lover’s Paradise 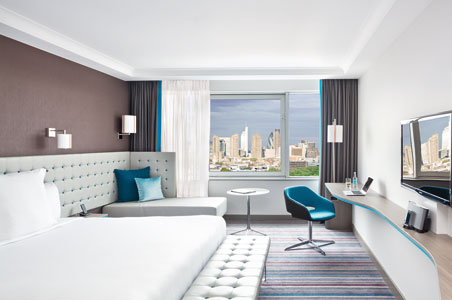 With 312 rooms (across six room categories, each featuring a docking station, free WiFi, and a Pullman bed), the property boasts views of the London skyline and convenient access to most major attractions. Golden Arrow is the hotel’s restaurant and named for one of the first-class Pullman trains during the 1920s (which passengers traveled on from London to Dover, then hopping on a ferry to Calais, then eventually Paris), with an open kitchen displaying Chef Rees Smith and his culinary crew hard at work on crafting modern cuisine. Each dish is matched with a suggested wine pairing.

There is also an offbeat, grandiose perk within the hotel: a 446-tiered theater often used for performing-arts shows. Another creative outlet: the Connectivity Lounge (designed for business travelers, it’s a hip space to toil away on one’s computer) in partnership with Microsoft. Wine lovers will be surprised to see a well-curated wine stash (called Vinoteca by Pullman) at the restaurant as well as for room service.