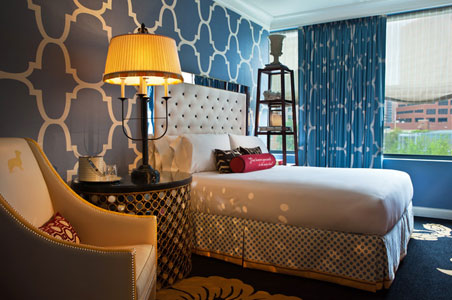 A chic new Hotel Monaco is opening in Philadelphia this week. From tomorrow, October 4, the hotel will open in the heart of the historic district, between Old City and Society Hill. Kimpton’s latest property is the first hotel to open on Independence Mall in many years.

Known for revitalizing historic buildings, Kimpton took on an ambitious project with this once-glorious 11-story Greek Revival-style building at 5th and Chestnut. Then an eyesore of a vacant office building, the Lafayette Building is now a 268-room, four-star hotel, an appropriate addition to the reinvented Independence Mall and Old City.

This part of Philly has seen a major sprucing up in the past decade. With a revived Independence National Historical Park (designed by Kevin Bacon’s father; there’s a 6 degrees joke in here somewhere), new housing for the Liberty Bell, and the National Constitution Center, Old City has become a vortex for tourism in the city. But it badly needed a hip hotel, new restaurants, and upgraded nightlife.

Hotel Monaco will offer all that with two new restaurants and its Stratus rooftop bar. Guillermo Tellez, executive chef of Square 1682 at Hotel Palomar—the city’s other Kimpton, opened in Rittenhouse Square in 2009—will take over as chef of the rustic Red Owl Tavern as well, offering a carnivorous menu to complement the bar’s whiskey-laden Prohibition-style cocktails.

Kimpton has its sights set on Philadelphia, with plans in place for three or four more properties in the city over the next few years.

Philadelphia-based contributor Cathleen McCarthy covers design and travel for The Washington Post, WSJ, Amtrak ARRIVE, Town & Country, inflight magazines, and her own network Save on Cities. Follow her at @clmccarthy.