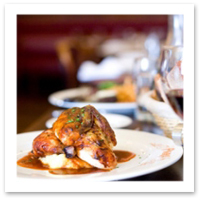 Restaurateur Stephen Starr’s fondness for themes (a giant golden Buddha in his pan-Asian restaurant, Buddakan, and a mid-country, mid-century feel at the comfort food eatery Jones) has reached perfection in this vast but meticulous stageset placed on Philadelphia’s most desirable corner. Brass rails, silvered mirrors, claret-hued banquettes, and oak wainscoting, reclaimed from now-shuttered Parisian restaurants, imbue patina— while small touches like newspapers on wooden poles, and a phone number recreated in the European manner, create extra realism. Similarly, standard menu items (roasted chicken, trout amandine) hold their own, but the little things—desserts and salads, fresh-baked goods (including housemade macarons), and excellent onion soup—stand out. Ask for an indoor-outdoor table overlooking the park: you’ll get generous views and the pleasant din of the 150 diners behind you, without the deafening buzz that is the restaurant’s one true downside. 227 S. 18th St., Rittenhouse Square. 215/545-2262. www.parc-restaurant.com. AE, MC, V. Median entrée price: $22.

Replacing the beloved—though infrequently visited—Valletta, Osteria da Clara is an unassuming Italian spot that gets by on the hustle and charm of the staff. When the kitchen isn’t overwhelmed—which happens when the austere white dining room gets beyond half-full—it pumps out lovely, unpretentious Italian cuisine, like crostini with chicken liver, polenta, and tomatoes. Pastas are superior to the meatier entrées, which overstretch; the spaghetti with ginger and chili, and the farfalle with smoked salmon are both definite winners. The tiramisu isn’t Prague’s best, but it may be Prague’s biggest. Mexicka 7, Vrsovice, 101 00. 271/726-548. AE, MC, V. Median entrée price: 235 Kc.

As suggested by its name, this upscale family-style restaurant features the noble bird in both Chinese and French recipes. Here, a light duck confit can comfortably share the table with a Chinese duck ‘taco’ made of stir fried duck, water chestnuts, and red peppers stuffed into a wheat casing. You can balance the rich dishes of canard with a plate of plum-infused cold pumpkin. Feel free to view the brick oven where the magic happens for a Beijing-style roast duck, and then cool off at the Bollinger champagne bar. 1949 Hidden City, Courtyard 4, Gong Ti Bei Lu, Chaoyang District. 010/ 6501-1949 AE, MC, V. Median entrée price: 100 RMB.

It seemed like all of Stockholm was holding its breath for Mathias Dahlgren to open his eponymously named new restaurant at the end of 2007 (his first since he shuttered the legendary Bon Lloc). When the doors finally opened, there was a collective audible sigh of relief: success! From the elegant modern dining room to the food—simple, artistically rendered local food which Dahlgren’s dubbed “natural cuisine”—this place doesn’t disappoint. For his trouble he picked up a Michelin star in his first six months. Don’t miss this place. Grand Hotel, S Blasieholmshamen 6., 103 27. 08/6793584. Reservations Essential. AE, DC, MC, V. No lunch Saturday, closed Sunday. Median entrée price: SKr 370.

This swanky, upscale hotel owned by the Hyatt group opened in late 2007, and has been making headlines for its modern, masculine design and unconventional approach. Instead of checking in at a desk, guests sit in a lounge while a staff member with a handheld computer takes their information. Rooms are sparsely decorated with designer furniture, and most importantly, intensely comfortable beds. Most have white walls, charcoal floors, and ruby-red touches. Rooms have Wi-Fi, MP3 docking stations, and ‘healthy mini-bars’ stocked with nuts, fruit and yogurt. The Aurora restaurant is exquisite, with marble floors and modern chandeliers, and the bar is popular with city workers. Pros: nice attention to detail; guest can borrow an iPod from the front desk; no standing in line to check-in. Cons: The price is off the charts; sparse décor is not for all. 40 Liverpool Street, Liverpool Street, EC2M 7QN. 020/7961-1234. london.liverpoolstreet.andaz.com. 267 rooms. In-room: safe, Wi-Fi. In-hotel: restaurant, room service, bar, laundry service, Wi-Fi, gym, parking (valet), car service, no-smoking rooms. MC, V. Rooms start at: £350.