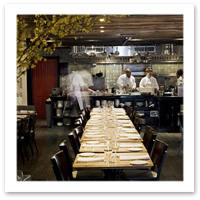 When you enter Elettaria’s warm, rustic space with its reclaimed barnwood-ceiling, exposed brick walls, lush velvet curtains, and white-powder steel bar, it’s hard to imagine that in a past life it was a rock club where a young Jimi Hendrix once played. The former stage is now an elegant open kitchen where chef Akthar Nawab and his culinary staff prepare inventive contemporary American dishes infused with Indian and South Asian flavors, ingredients, and spices. Diners are offered inspired dishes, such as lightly beer-battered quail over frisée with bacon, mango, and a small fried egg; a succulent duck keema with nettles and cardamom; and the day boat cod with corn milk, avocado, and star anise vinaigrette—all at reasonable prices. Cocktail connoisseurs will appreciate the mixologists at the bar, who serve up intriguing beverages including the “8th Wonder”, a cardamom Chai-infused Buffalo Trace bourbon with lemon, sweet vermouth, and soda. 33 West 8th St., Greenwich Village. 212/677–3833. www.elettarianyc.com. AE, D, DC, MC, V. No lunch Mon.–Fri. Median entrée price: $24.

The Round House Restaurant, South Africa.

Rather than a lion or zebra, the trophy at this 18th century Table Mountainside hunting lodge is fine dining. Start with deep-fried soft shell crab with prawn and avocado sauce tartar, before digging into a duo of duck: crispy breast fanned on top of parsnip purée with ravioli of duck confit, foie gras, and Grand Marnier sauce. The catch of the day is pan-fried and served with saffron-braised fennel, roasted artichokes, and an orange veloute. Although the Somerset Room offers sea views, it can be very noisy. The private room for up to eight guests may better suit big groups. Beware of the outstanding wine list: it can easily ratchet up the bill. The Glen, Camps Bay, Cape Town, 8001. 021/438–4347. www.roundhouserestaurant.com. AE, DC, MC, V. Closed Mon. No lunch Tues.–Sat. Median entrée price: R180 for two course minimum.

This massive, sunken-style space decorated with offbeat Zen furnishings, such as a 16-foot rotating vertical waterfall, screen-printed images, and statues of Buddha scattered throughout, is the place to go for both the hip and not-so-hip. Entrées, including the mussels steamed in red Thai curry and Kaffir lime, and Indian spiced roast chicken, are meant to be shared. End your meal with the banana tempura and apple-mango dragon roll or try one of their tasty beverages such as a lychee martini, or one of their hot and cold spiked teas. The DJ’s nightly music can get loud, so request a table in a corner if possible. 499 King St. W., King West, M6N 1H7. 416/849–1808. www.spiceroute.ca. No lunch Sat. & Sun. AE, MC, V. Median entrée price: C$18.

Perched on Oxford Street at the top of Park Lane, the Cumberland is a giant hotel behemoth. It has a sleek, elegant design, and a virtually all-white lobby with soaring ceilings and art in clear glass cases. It has 1,019 guestrooms, all with modern décor in shades of beige and cream. Rooms show good attention to detail, from the Egyptian cotton bed linen to the plasma-screen TVs. It has three restaurants (one of them headed by British TV chef Gary Rhodes) and two bars, and an optimistic approach to how much people will spend on a room. Pros: spacious rooms; some rooms on upper floors have good views of the city. Cons: with more than 1,000 rooms, personal attention is lost. Great Cumberland Place, Piccadilly, W1H 7DL. 0871/200–1595. www.cumberlandhotel-london.co.uk. 1,019 rooms. In-room: safe, Internet. In-hotel: 3 restaurants, room service, 2 bars, laundry service, gym, no-smoking rooms. â€‰AE, MC, V. Rooms start at: £350.