New and Noteworthy for the Week of 9/17 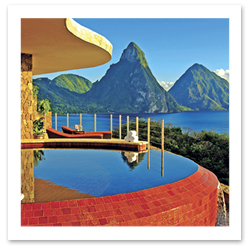 Stay: In St. Lucia, the ultimate resort
It opened for business late last year, but Jade Mountain resort, in delicious St. Lucia, is still so hot we’re burning up just thinking about it. For months now, the accolades have been pouring in for architect Nick Troubetzkoy’s otherworldly architectural vision — 24 individually designed suites hugging the craggy cliffs of Morne Anse Chastenet. Each suite boasts hardwood floors and handcrafted furniture, an enormous balcony with an infinity pool, and unobstructed views of St. Lucia’s twin Pitons and the shimmering Caribbean Sea below. Wanna stay here? Act now. Room rates go up November 1 (from $950 to $1,020 per night).

Eat: Mexican cuisine in London?
London is just so with it. We predicted that haute Mexican cuisine would catch on there long before making a splash anywhere on the Continent, and so it has. And unlike a lot of other haute things in London, you don’t have to be a billionaire to sample it. At Wahaca, which opened recently in Covent Garden, Chef Thomasina Miers has pulled together a smart space with colorful décor and cafeteria-style seating, nods to the streetside food stands of her native Mexico. The menu features everything from street food to soups and salads to pork pibil — marinated pork served with smoky black beans, green rice, and pickled onions. Churros y chocolate makes a fine finish.

Drink: In New York, the Francophile’s cocktail
A heap of new restaurants opened this summer in New York, among them Chef Didier Virot’s FR.OG, which stands for “France Origine.” Virot’s playful blending of French, Vietnamese, and Moroccan culinary traditions is sensational by itself. Throw in mixologist Robin Lewis’ artful craft and you’ve got magique absolutement. In typically French fashion, the drinks are as intricate as they are inspired. We love the “Vietnamese Muddler” — Aquavit with muddled cilantro, cucumber, and a float of Moscato d’Asti. But our favorite drink is the splendidly titled “Cloud” — lemongrass-infused Cruzan rum, coconut, and essence of Vietnamese herbs. Drinks run $13-$16.

See: In LA, many designs for living
We love Los Angeles. Sure, it’s a torture garden with lots of sketchy neighborhoods, but there’s no other place in the country where style for style sake takes absolute pride of place. You’ll see what we mean if you take one of architect Laura Massino’s popular architecture tours. Every conceivable style of design can be seen, from Tudor to Spanish Gothic. There’s 20th-century stuff, too, like houses by Frank Lloyd Wright and Richard Neutra and contemporary “starchitect” Richard Meier. New to the roster is a tour of buildings designed by Frank Gehry, including his own home in Santa Monica. Aficionados of Tinseltown lore should check out the Hollywood Tour, which includes a stop at the apartment once owned by gossip queen Louella Parsons.

Shop: Dallas shopping blitz
Mention shopping in Dallas and most people assume you’re talking about the high-end Galleria. It’s not necessarily so. Last spring, Dallas unveiled its hip new designer “flea market,” Lifestyle Fashion Terminal, in the new Victory Park complex. LFT is a stunning 30,000-square-foot shopper’s dream encompassing 12 separate designer storefronts. Gawk at the stuffed peacock in Cynthia Vincent’s section and then move on to labels such as Premium 93 and James Perse, or the Market, featuring Dallas designers and samples from 35 lines of denim. Take a load off your feet upstairs at Avalon Spa and wellness café. (Alia Akkam)

Play: A Palm Springs makeover
We moaned a couple weeks back about how spas are getting smaller and smaller all the time. Size certainly isn’t an issue at the Desert Springs JW Marriott Resort and Spa, near Palm Springs. The resort has just completed a huge renovation, making it the most up-to-the-minute resort and spa in the Palm Desert area. The 38,000-square-foot spa has new courtyards, treatment rooms, a relaxation lounge, a hammam steam chamber, an onsite fitness center, and a luxurious VIP spa suite. Our favorite new feature? Definitely the “programmable” rain showers!