In this issue: Barcelona, Estonia, Patagonia, Moscow, and Mexico City… 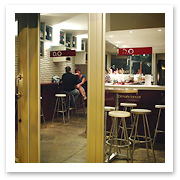 Barcelona’s best grilled cheese! After this, there’s no going back to Wonder bread and Kraft Singles. At D.O. Vins i Platillos, in the hip Barcelona neighborhood of Gracia, you’ll find a stupor-inducing take on grilled cheese. Melted brie gets paired with a sliver of air-dried beef, and truffle butter turns this €5 sandwich into a delicacy. There’s no shortage of other small plates to savor at this chatty wine bar. The oysters (Marennes) are super-fresh, with a pleasant touch of sand in each slurp, and all the wine (try a bottle of Rivola, a leathery Cabernet) is cheap and delicious. Calle carrer Verdi, 36.

Play: Estonians toast to ABBA
The Dancing Queens turn 35 this year, and the good people of Estonia haven’t forgotten their brethren across the Baltic. On July 8, amid the suds and sausages of the beer festival Ollesummer in the capital city of Tallinn, the country’s top artists will interpret songs by the Swedish phenoms. One of the headliners is Lenna Kuurmaa, the lead singer of the three-piece girl-band Vanilla Ninja, who will perform an Estonian version of “Waterloo.” Tickets cost 150 kroons or about $13. 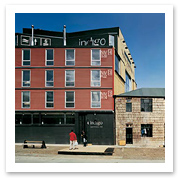 Stay: Scandinavian-chic in Patagonia
Before the Indigo Hotel & Spa opened, the perfect Patagonia hotel room only needed four walls and a big window — the better to see glaciers and mountains with. Designed by Chile’s hottest architect, Sebastián Irarrazaval, the Indigo in Puerto Natales sets the new standard for low-latitude luxury. With three outdoor Jacuzzis facing the breathtaking Fiordo Última Esperanza, massive windows, and public spaces bathed in natural light, this hotel knows how to take in its surroundings. The hotel’s Nordic feel pairs perfectly with the view. Rooms start at $155 per night.

Shop: Ralph Lauren’s Moscow outpost
It’s not easy being the mistress of a Russian oil oligarch. Bored with Gucci, blasé about Prada, you wonder: Isn’t there anything new to slip out of this season? Well, Ralph Lauren to the rescue! The American designer opened his first store in Russia last month on Tretyakovsky Passage, the Rodeo Drive of Moscow’s nouveau riche. On its first day of business, the 8,000 square-foot shop sold out of its entire stock of $3,000 “Ricky” crocodile-leather handbags. 1 Tretyakovsky proezd. 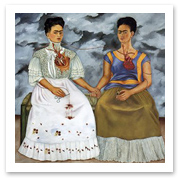 See: In Mexico City, a homecoming for Frida
More than 300,000 people are expected to pour into the Palacio de Bellas Artes in Mexico City this summer for the largest-ever Frida Kahlo retrospective, celebrating the Mexican artist’s 100th birthday. On display are about 350 of Kahlo’s works — including a never-before-seen collection of paintings. Fridamania continues at the Casa Azul, Kahlo’s childhood home, which has an exhibition of correspondence with Kahlo’s husband, the muralist Diego Rivera, along with some of the artist’s clothing taken from a recently discovered trunk.

Drink: Colin Farrell’s favorite watering hole in Bruges
In his upcoming film In Bruges, Colin Farrell plays a hit man on the lam in this charmingly soporific city. According to rumors buzzing around this medieval metropolis, Farrell fought off his ennui at De Republiek Cultuurcafé. This bar-resto serves a full array of Belgian brews, including the ever-popular monk-made varieties. There’s also an art-house movie theater in back and one of the city’s best outdoor terraces. Sint-Jakobsstraat 36, 050/340-229.