Deals Leila Najafi Attention West Coast: You Can Now Book Flights to Paris for as Little as $321
Home  >  News   >   New and Noteworthy for the Week of 8/20

New and Noteworthy for the Week of 8/20 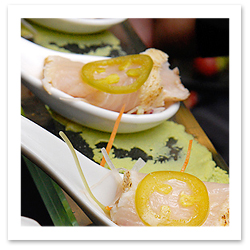 Eat: In LA, a seventh inning for Puck
Los Angeles is all about appearances, which explains why so many restaurants there turn heads but don’t always pass the taste test. Oh well, what would you expect from a town whose cultural legacy encompasses Gilligan’s Island and four versions of The Invasion of the Body Snatchers? Thank God for Wolfgang Puck. His seventh LA venture, Red Seven, easily demonstrates the compatibility of style and substance. Puck’s Asian-fusion menu riffs on traditional Asian cuisine — think Miso-Broiled Butterfish, Wok-Braised Szechuan Snapper, and Shanghai Noodles with Fried Pork. The desserts also tweak tradition — try the Candied Ginger Crumble or the Milk-Chocolate Ovaltine Bar. Yum. Entrées at dinner range from $14-$22.

Stay: The Wright stuff in Greensburg
If you’ve longed to stay overnight in a Frank Lloyd Wright-designed house, here’s your chance. The architect’s Duncan House, built in Chicago in the 1950s, is now open to overnight guests, only the house is no longer in Chicago. Wright’s single-level structure was moved from the Windy City last year to Greensburg, Pennsylvania, 15 miles from Wright’s other dwelling, Fallingwater. If you’re lucky enough to get a reservation — it’ll cost you about $385 per night — don’t expect to have the full 1950s experience. The current owner has requested that guests not use the original range, dishwasher, pink refrigerator, or oven. Still quite usable, however, is the original glass-walled shower, which looks out on a serene forest setting.

Drink: London’s bionic booze
A bar is a bar is a bar unless it’s the Artesian Bar in London’s Langham Hotel. Think faux rattlesnake flooring, Broderie Anglais curtains, glossy resin tables, purple leather seats, painted wooden chandeliers — no wonder Madonna likes it. But if tongues are wagging over Artesian, it’s not because of the décor or the celebrity guests, it’s because of the “energized” ice cubes: they’re denser and colder than most, so cocktails stay potent longer. Anyone for a second round?

See: New York’s Met goes modern
New York City’s venerable Metropolitan Museum of Art is not the first place you think of when contemporary photography comes to mind. Nevertheless, the Met has been collecting the work of today’s photographers for many years, and art lovers will get a chance to see a lot of it in one room when the museum unveils its new Joyce and Robert Menschel Hall for Modern Photography in September. The inaugural installation, Depth of Field (September 25 through March 23, 2008), showcases key images the Met has acquired over the past 20 years, some of them by legendary shutterbugs Richard Prince, Nan Goldin, Jeff Wall, and Cindy Sherman.

Play: Serenity now in Mendocino
You’ve probably noticed that environmental consciousness is once again all the rage. Even luxury resorts are talking about reducing their “carbon footprints.” Like Stevenswood Spa Resort in lovely Mendocino. The recently renovated hideout now sports interiors fashioned with reclaimed lumber, flooring made from recycled wine corks, and micro-fiber sofas. We love all that, and we’re sure it’s worth lots of Green Points, but the thing we love most about Stevenswood are the Jacuzzi spas, which are ideally situated in a forest, where the only sounds you can hear are the chirping of birds and the crashing of nearby waves.