Let’s call it a coming out party. Since the mid-1990s, "private kitchens"—hush-hush, unlicensed restaurants, sometimes operating out of the chef’s own dwelling space—have proved quite popular in Hong Kong. There are dozens operating at any given time throughout Hong Kong Island, Kowloon, and even the New Territories outskirts, and owners frequently discourage sharing specific details and addresses in public forums for fear of being shuttered or fined. However, over the past couple of years some private kitchens—sue fon tsoi in Cantonese—and chefs have proved so wildly popular, ambitious, and successful that they’ve gone mainstream.

Bilingual online Hong Kong dining resource, Open Rice, maintains a Private Kitchens category in its restaurant listings, which range from home-style uber-local Cantonese to expat-friendly Western fare. Many of these semi-private kitchens require far-in-advance reservations, sometimes due to their being classified as private clubs as opposed to restaurants (a licensing loophole that is far less costly and restrictive), and sometimes due to their incredible word of mouth. All are tucked away in upper levels of office or residential buildings with little or no signage, and some will only divulge their specific address when making a booking. Here we feature a quartet of four that are well worth visiting. 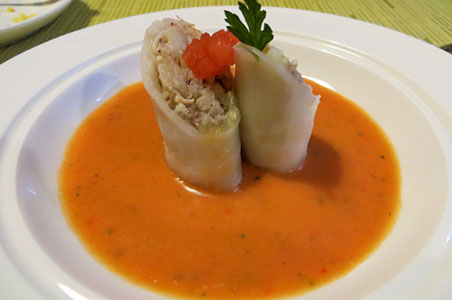 A former model, native Honky Esther Sham liked the intimacy and high quality cooking she found in private kitchen venues, but was frustrated by their chefs’ lack of culinary creativity. Having trained in multiple Michelin star venues including L’atalier de Joel Robuchon and Paris’ Relais Louis XIII, Sham opened Ta Pantry in 2008 in a residential building on Star Street. Boasting a single table that accommodates a single party of up to 10 per meal, and sophisticated wine selection that bests Hong Kong’s finest restaurants, Sham, who goes by Chef Tata, whips up brilliant Asian-European fusion dishes. A recent lunch included delicate scallop carpaccio with cream of sea urchin, her intensely flavorful, slow-cooked "melting onion duck," and a Nutella and cornflake crepe topped with green tea ice cream. Currently in the process of moving to up-and-coming neighborhood Tin Hua, Sham will re-open Ta Pantry in March 2013. Lunch will no longer be offered, but she can now accommodate up to three separate parties per night thanks to three private dining rooms fitting 12-14 each (she charges per table, and the new fee scale is TBA). Spread the word… but keep the specific street address to yourself! 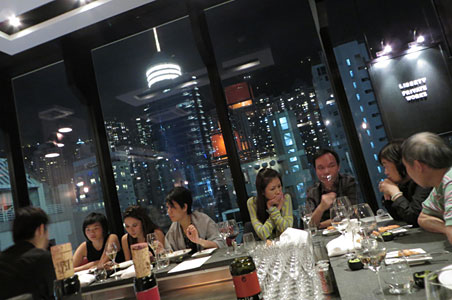 Liberty began as a bona fide, 15-seat private kitchen in 2009, but in 2011 it went legit, moving to a larger space on the 26th floor of a commercial building (other tenants include a yoga studio, spa, and sushi joint). Boasting a cinematic view of Hong Kong’s glittering Central district, Liberty is essentially a giant chef’s table for Toronto-born chef Vicky Cheng, who serves up a 10-course degustation menu six nights a week at HKD$800 per person. Cheng’s intricate, visually avant-garde creations—like a scallop with Jerusalem artichoke, crispy pork rind, and black garlic—are assembled like puzzles by busy staff, making this a private art studio to boot. 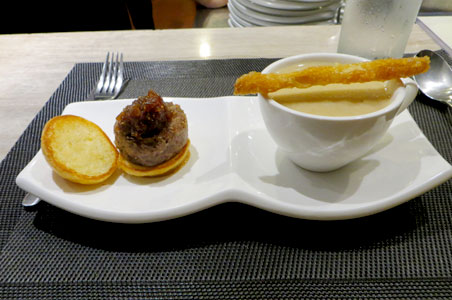 Open since late 2009 within a residential building off busy Hollywood Road, this apartment turned restaurant can accommodate up to 28 diners between its indoor tables and outdoor patio. Vietnam-born, New York-raised chef Que Vinh Dang’s six-course set menus (HKD$680 per person) utilize as much local produce as possible (no HK beef, though, since it’s "not so great," to put it politely) and are frequently built around a theme. November’s entailed a "tribute to pork," and incorporated swine in every savory course, like Chilean Sea Bass over a bed of cubed chorizo and succulent clam broth. A solid 2 months’ advance reservation is recommended – and rewarded, with a perfect crisp-chewy macaroon, which Dang, evincing his love of French technique, builds every dessert course around. 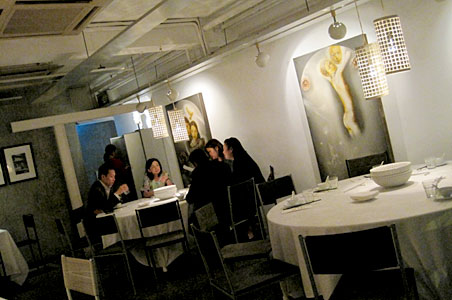 Set within fine artist Wang Hai’s gallery space just off hilly Graham Street, Da Ping Huo has rightly earned a reputation among both locals and international guidebooks as one of Hong Kong’s best, and most enduring, private kitchens thanks to the transcendent Sichuan-inspired cooking of Hai’s Opera singer wife/chef, Wong Xiaoqiong. The dinner set menu’s (HKD$388; $50) incredible dozen-plus courses alternate between mild and spicy—and, sometimes, chili-crowded tongue-numbing—while dessert is accompanied by a sweet serenade from Xiaoqiong herself.

All photos courtesy of Lawrence Ferber