News Apeksha Bhateja What Are the Chances You'll Get Monkeypox at a Hotel?
NewsHolland America Extends Dancing with the Stars Program 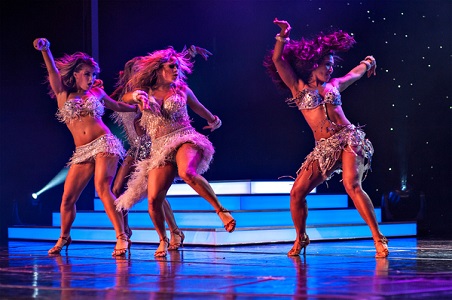 Whether you love hitting the dance floor yourself or prefer to watch professionals perform choreographed routines, Holland America Line has got you covered. The line has extended its wildly popular "Dancing with the Stars: At Sea" program through 2014 on all 15 of its ships. The program, which was inspired by ABC’s televised dance competitions, will build throughout the year toward a "Champions Cruise," which will feature a guest dance-off on the December 6, 2014, Caribbean sailing of ms Westerdam.

Dancing has always been one of the most popular pastimes aboard Holland America ships and the activity is emphasized on every sailing throughout the year. The Dancing with the Stars: At Sea program also includes six special theme cruises featuring the show’s professional dancers and celebrities. Dancers Tristan MacManus and Kym Johnson and TV personalities Carson Kressley and Sabrina Bryan are scheduled to sail on all six 2014 theme cruises.

The 2014 Dancing with the Stars theme cruise schedule is as follows:

* June 14 and 21 aboard ms Zuiderdam: 7-night Alaska, round-trip from Vancouver

So, what can you expect on these theme cruises? You’ll have the opportunity to watch performances by dancers from the TV series. You can also sign up for dance lessons with the ship’s very own professional dancers and attend a fashion show featuring some of the costumes from ABC’s show. There will even be meet-and-greets with the dancers and celebrities, so bring your camera for that special photo opp!

For those who want to do more than simply watch the onboard shows, keep in mind that there’s a dance competition for guests, as well. From November 26, 2013, through October 22, 2014, every Holland America sailing will feature a dance-off competition for guests to compete for a chance to represent their ship on the 2014 Champions Cruise on December 6, 2014. A total of 15 winners will ultimately compete.

After several rounds of competitions on each cruise, finalists will be paired with a Holland America dancer to perform one of the show’s routines and compete against their fellow guests and finalists in the ship’s main show lounge. Senior ship officers, shipboard professional dancers, and other cruise staff will make up the panel of judges, who will also take into account an "audience appreciation" score.

Starting September 21, 2014, winners of the guest competitions with the highest scores from each of Holland America’s 15 ships will be notified that they have won a free ocean view stateroom on the December 6 Champions Cruise. So dust off those dancing shows and book a Holland America cruise to show off your moves!