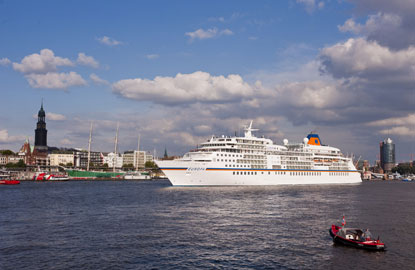 Hapag-Lloyd’s Europa is very likely the best cruise ship that you’ve never heard of. As the premier German cruise line makes an ever-increasing push for an English-speaking clientele on the ship’s selection of "international" sailings (itineraries that are hosted in English, in addition to standard German)—and as they look ahead to the spring 2013 launch of their Europa 2, slated to be fully bilingual—I was recently invited aboard to sample an Anglophone-oriented version of their acclaimed cruise product.

What’s for sure is that the Hapag-Lloyd experience is decidedly German, toggling between intermittent exclusion (our group bus transfer from the train station to the port was conducted with nary a word of English) and, on the flip side, exclusiveness (our intimate English-language group encounters with onboard lecturers and experts).

Designated international sailings ensure, however, that all menus and schedules, at least one daily shore excursion, and most onboard entertainment and enrichment programs are made available in English, as are the services of an international hostess/translator (English-language guests are welcome on "regular" non-bilingual sailings, too, but with considerably less accommodation made).

With my own German vocabulary limited to guten tag and gesundheit, the 95-plus percent of German-speaking passengers (hailing from high-society Germany, Austria, and Switzerland) seemed a bit far off to reach socially (those that did speak English seemed to be shy about it). Though, if like me, you’re less interested in passenger camaraderie than sparkling ship amenities, polished service, intriguing ports, and enriching onboard programming and entertainment, this shouldn’t factor too highly.

Bilingual staff easily catered to our English-language needs, and our little hub of a dozen or so fellow native-English speakers—hailing from as far away as Zimbabwe and India—crossed paths frequently and congenially at English-language hosted reception dinners, onboard programs, and excursions. 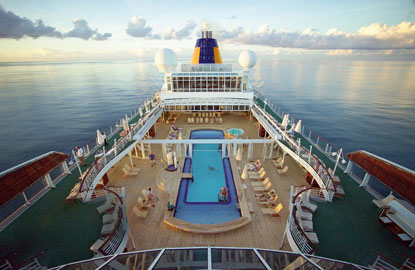 For a small luxury ship carrying just 408 passengers, Europa delivers on big-ship amenities, including some half-dozen watering holes (the Sansibar indoor-outdoor lounge and smoky Havana cigar bar were the most popular) and a main theater (the Europa Lounge), where a lot of the sophisticated daily entertainment unfolded.

Europa guests can expect a repertoire of classic musical, dance, and opera performances, largely powered by a rotating roster of international entertainers, who are typically invited aboard on a per-sailing basis. On our itinerary, dubbed "History—A Majestic Baltic Sea Symphony," we were impressed by a French string trio (Carnegie Hall regulars) that performed renditions of Brahms, Schubert, and Mozart, as well as a Russian folklore performance group brought on in St. Petersburg. Special guest lecturers provided further enrichment; we enjoyed an entertaining overview on the Romanovs, provided by the guest "aristocracy expert."

Noticeably missing for a ship of its size was a casino, which was removed due to underuse; the cruise director explained that casinos are rather taboo in German high society, and that the ship ultimately generates more revenue from their onboard art gallery, which showcases works from special guest artists on each sailing.

A children’s and teen’s room catered to the handful of families onboard, though that number spikes during school holiday periods (Insider Tip: come April, kids ages 11 and under can sail for free with an accompanying adult). 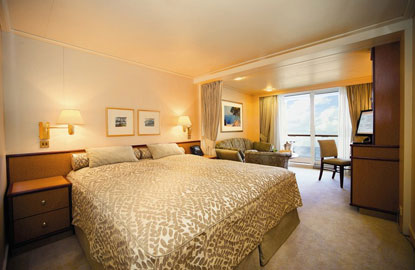 The comfortably large and well-appointed standard suites, meanwhile, started at a spacious 290 square feet, with a bed configuration in queen or twin, and an adjoining living room area; most come with balconies. Customizable touches like individual climate control, daily newspapers, on-demand movies and music, stocked minibar (all free of charge), and round-the-clock room service, were joined by exceptional extras like walk-in wardrobes and marbled bathrooms with full baths. More opulent penthouse suites tacked on further enhancements, like 24-hour butler service and en-suite saunas.

And if you’ve been looking for an excuse to dust off those dapper duds, the Europa is it— country club casual defined the days, while evening dress was "elegant casual" at its most relaxed (meaning men could shed their ties, but not their jackets); two gala nights came complete with full-blown tuxes and ball gowns.

Though the thought of German-produced cuisine might bring giant pretzels, wiener schnitzel, and sauerkraut to mind, the food onboard was hands-down the best I’ve had at sea. The main Europa restaurant and Lido Café buffet served consistently solid continental cuisine for breakfast, lunch, and dinner, and enough caviar, truffles, and lobster to satiate the most jaded foodie. 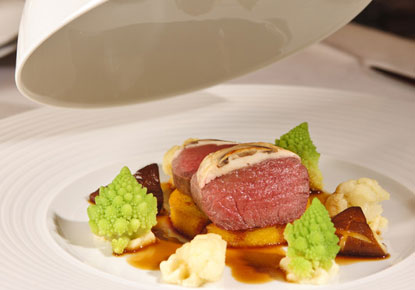 But the ship ups the value ante with its two spectacular, reservations-required alternative dining venues, included in the rates. Three-star Michelin chef Dieter Müller’s namesake restaurant is overseen by the chef himself 70 days a year, with multicourse menus highlighting French, Mediterranean, and Asian cuisines. Italian restaurant Venezia, meanwhile, doles out delectable dishes highlighting regional specialties from Tuscany, Sicily, and beyond. Beverages at all meals, apart from breakfast (where juices were available), came at a fee, with only coffee or tea available on a complimentary basis.

In the restaurants and beyond, some 280 German and English-speaking crew members busily provided a consistently high level of service and pampering—we were particularly impressed by the attentive wait staff, and the newly added travel concierge services, on hand to help customize independent days in port.

Our 12-night Baltic Sea sailing from Kiel to Hamburg in Germany, took in port calls in Poland, Sweden, Estonia, Russia, and Finland (rates from $6,580). Highlights included strolling the UNESCO-designated medieval city of Tallinn, as well as design-savvy Stockholm. We also enjoyed the ship’s own zodiac excursions through skerries surrounding Stockholm (included in the rates), as well as the relaxing day-at-sea passage through the scenic Kiel Canal (connecting the Baltic and North Seas). While at least one English-language excursion was offered in each port (at an à la carte fee), some of the more exceptional offerings—an evening tour of the paintings at the Ermitage in St. Petersburg—were unfortunately conducted in German only.

The Europa‘s unique itineraries average 13 nights, with spring spent on the Med, summer on the Baltic and North Seas, and the rest of the year navigating a round-the-world cruise itinerary (she has more than two dozen passengers aboard for the long haul).

Look for seven designated international itineraries on the Europa in 2013, with highlights like the 13-night Indian Ocean sailing from Singapore to Dubai (embarks March 30, 2013; rates from $5,450/person); or try a near-identical 11-night Baltic itinerary next summer (embarks August 21, 2013; rates from $5,590/person). Rates are inclusive of basic gratuities; expect à la carte pricing for excursions and most beverages.

The Europa’s sister ship, Europa 2, launches in May, taking in some 123 ports in the Mediterranean, Arabian Peninsula, and Southeast Asia; 6- to 13-night fully bilingual itineraries start from $4,370/person.