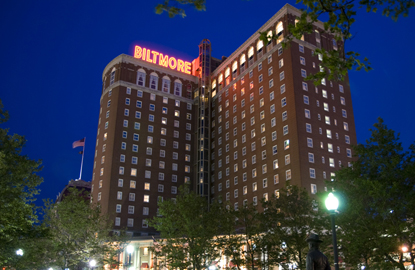 The iconic Providence Biltmore Hotel, while not the tallest building in the city of Providence, Rhode Island, certainly makes its mark on the skyline—its sky-high retro neon "BILTMORE" sign is one of the most recognizable features downtown. And its grand ballroom, plays host to more than 75 weddings a year. Last week, plans were finalized by Finard Coventry Hotel Management to purchase the 90-year-old hotel from Grand Heritage Hotels and Resorts for $16 million. The property will continue its marketing affiliation with Preferred Hotels and Resorts, but now under Preferred’s Summit brand.

Lucky for Providence brides, the National Preservation registered hotel plans to stay open during a $10 million-plus renovation, which will include updates and upgrades to both structural elements like a new roof and repairs to elements of the facade, as well as renovations of its 292 guestrooms, 18 meeting rooms, ballrooms, and the lobby. Finard Coventry announced on its website that the updates should start within the coming months and could take up to two years to complete.

"We are delighted to become stewards of this iconic hotel that is so much a part of the fabric of the city," said Todd Finard, principal of Finard Coventry Hotel Management in that same statement. "It will be an honor to restore this architectural treasure known for its legendary hospitality and charm."

For more information about the Providence Biltmore, visit ProvidenceBiltmore.com.