News Ronny Maye Should You Cancel Your Vacation to an Area Impacted by a Natural Disaster?
NewsHistoric Condado Vanderbilt Hotel Reopens in San Juan 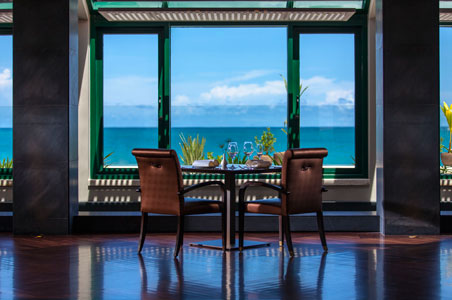 Last month, San Juan, Puerto Rico’s hip enclave—Condado, which hugs the Atlantic Ocean and is marked by restaurants and designer-label boutiques along bustling Ashford Avenue—welcomed a new hotel that fits right into the neighborhood.

But because this is its second coming, the hotel needs little introduction. Condado Vanderbilt Hotel was built on Ashford Avenue in 1919 by Frederick William Vanderbilt (son of William Henry Vanderbilt) and welcomed Hollywood stars and important dignitaries over the years like Charles Lindberg and President Franklin and Eleanor Roosevelt. Designed by Whitney Warren, a New York architect who also designed Grand Central Station, it shuttered about 20 years ago.

The first phase of the reopening—which rolled out on Oct. 16—continues the lavish theme but also allows for swanky additions like a Michelin-starred chef, spa, and oceanfront infinity pool. Juan Jose Cuevas, the executive chef at 1919 and a Puerto Rico native who has cooked at Alain Ducasse at the Essex House and Dan Barberâ€™s Blue Hill NYC, promotes farm- and ocean-to-table cuisine with almost every ingredient sourced from Puerto Rican farmers and foragers. Diners are given a stunning view of the Atlantic Ocean while they eat, separated from the beachfront by only a glass wall. Designer Jorge Rossello—known for his work at other hotels (La Concha Resort, also in Condado)—retained the regal feel the hotel’s long been known for but also added modern accents that include three chandeliers featuring cascading mother-of-pearl discs, tall wing chairs, and benches at each table.

Also in the hotel are plenty of spots to kick back with a cocktail or gourmet foods: Blu, a casual bistro open for breakfast, lunch, and dinner; Vino Veritas Wine Bar, for rare wines paired with ocean views; Fumidor, a cigar lounge; and Marabar, Martini Bar & Lounge, live jazz and salsa music to the tune of cocktails.

In 2013 all of the 323 rooms—including 80 Commodore suites and 40 Biltmore suites housed in twin 11-story towers—will be available for booking after a refurbishment.