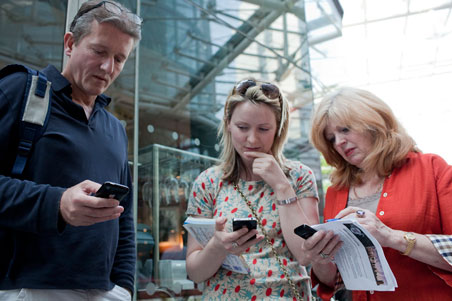 Listen up, mystery mavens and amateur gumshoes. There’s a new way to explore cities (well, cities in England, anyway), and it involves neither a bus nor some sort of placard on a stick. Part scavenger hunt, part city tour, HiddenCity is the latest way to find what’s fabulous in England. This new approach to touring leads travelers through the city by clues passed via text message; players must solve a clue to move on to their next destination. Intrigued yet?

Here’s how it works. Visit HiddenCity, and sign up for a hunt. There are currently 17 of them, spanning London, Manchester, Newcastle, Brighton, and York. Each hunt has its own theme: "Cryptic Covent Caper—London" takes players through Covent Garden and the West End; "Bright Lights Evening Trail—London" runs at dusk as the city begins to light up; "Creative Spaces—Manchester" is an exploration of the city’s art scene. Hunts take anywhere from one to five hours with breaks, and are rated by difficulty on the site. Each costs about $24 per team.

Once you’ve signed up a team, assemble at the listed starting point, and then text HiddenCity. They’ll send the first clue, a puzzle whose answer is some detail or feature about your next destination. Once you figure out your destination and solve the clue, you text the correct answer back to HiddenCity. They’ll send you another clue to lead you to the next site, up to 22 total. To give you an idea of the enigmas that need unraveling, a sample clue on the HiddenCity site reads:

"Where red and blue meet the circus, head south to see birds paired with amazons and a worldly store. What country is at the end of floored society?"

Come again? Fortunately for thirsty detectives, each hunt ends at a bar or pub.

While we’ve yet to give HiddenCity a try (we are not currently in England, but we wish we were) we think the theory behind the hunt is an interesting alternative to organized tours or aimless solo wandering. Plus, teams aren’t timed on their clues, so you can play at your own pace…that is, unless you’re competing with fellow travelers for domination, in which case, out of the way!