Want to hear a secret? Although it may seem that the road less traveled has now turned into an autobahn and that a souvenir shop has been set up at each of Europe’s “undiscovered” sites, the continent still has many communities that qualify as hidden treasures. Here are three of them. 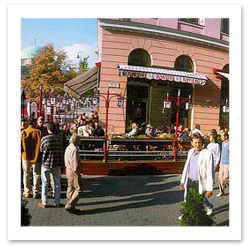 First-time visitors are often surprised that this city in the Mecsek Hills, about 100 miles southwest of Budapest, packs such a cultural punch. They shouldn’t be. After all, Pécs has been around for 2,000 years and has the sights to prove it. Its religious monuments run the gamut, from an Early Christian mausoleum to a sublime Neo-Classical basilica, with a pair of 16th-century mosques and a grand 19th-century synagogue thrown in for good measure.

Pécs has been a university center since 1367, and that adds to its cachet, enabling the city to support an arts community more vibrant than you’d otherwise expect in a city of only 160,000 inhabitants. Along with museums devoted to native sons — like Vilmos Zsolnay, whose Art Nouveau tiles adorn local roofs and whose porcelain factory still operates here — there’s a fine selection of private galleries featuring up-and-coming artists. Moreover, the city’s ballet company and symphony orchestra have international reputations.

The scene will heat up even more as Pécs prepares to assume the title of “European Capital of Culture” in 2010, making this a natural choice if you want to see beyond Budapest without scrimping on artsy amenities. You won’t have to scrimp on accommodations either. At the Millennium Szálló, designed by renowned architect Sándor Dévényi, double rooms with buffet breakfast go for €80 a night, which means you should have more than enough left over to buy yourself a peasant-style dinner topped with a bottle of wine from one of nearby Villány’s celebrated vineyards. 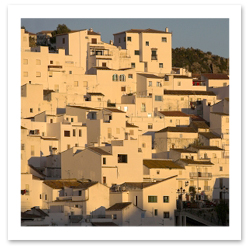 Like Pécs, this Andalusian hamlet has a storied past. Thanks to its dramatic location 1,425 feet up in the Sierra Bermeja Mountains, it was a popular stop for armies, from the earliest Iberians to the French, who attempted a take-over during the Napoleonic Wars. In between, Romans built a still-functioning bath below the town. Moors, meanwhile, erected a now-ruined fortress on a promontory above it. Happily, though, the tourist hordes that conquered the Costa del Sol, just 20 minutes east, have yet to invade.

Casares admittedly does draw crowds of musicians, dancers and vendors during the annual feria (held in early August), but otherwise it remains wondrously quiet. Hence this village, perched on twin plateaus, is the ideal place to practice the lost art of lounging. A leisurely walk in any direction will eventually lead to Plaza de España, where you can browse through the shops bordering the square, watch locals play pétanque, then pull up a stool at a tapas bar or tavern where simple fare (think chicharrones and fresh goat cheese) is prepared with Andalusian flare.

If you do feel compelled to break the laconic spell, Gibraltar and Ronda (the home of modern bull-fighting) are do-able daytrips. If you’re ambitious, so is the Moroccan port of Tangiers. Most travelers, however, will be content to hunker down in digs rented through Just Casares, which lists white-washed townhouses from €360 per week in summer. Simple rooms are also available at Hotel Casares. 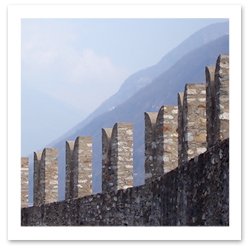 If peace in a valley sounds more appealing than a hilltop retreat, Ticino’s capital, Bellinzona, fits the bill. Key alpine passes (including the fabled St. Gotthard and San Bernardino) converge here, so Bellinzona is easy to access. Yet you may feel you’ve fallen through a rabbit hole rather than emerged from the mountains because, even though a Swiss flag flies here, the feel is definitely Italian. Located 87 miles from Lucerne — but only 56 from Milan — Bellinzona is defined by Lombardy-style buildings, classic piazzas, fresco-filled churches and al fresco cafés where Italian-speaking residents debate the relative merits of risotto and polenta.

As if that weren’t enough, three mountainside castles — all built by Italian nobles between the 13th and 15th centuries — serve as a backdrop. Taking them from the top, there’s Castello di Sasso Corbaro, which boasts views across the Alp-rimmed valley to Lake Maggiore; then Castello di Montebello, notable for its stunning ramparts and crenellated towers. The lowest (and oldest) of the lot is Castelgrande, where you’re welcome to wander the grounds, tour the small history museum, or just kick back in a courtyard that stages open-air concerts and other special events each summer. Its manicured lawns seem made for picnicking (you can buy supplies at Bellinzona’s Saturday morning market). However, Mediterranean-inspired dishes and fine regional wines are also available at Castelgrande’s two restaurants: an upscale dining room and a more causal “grotto” that spills onto a panoramic terrace. After dinner, head back to town via a scenic path and book into the three-star Unione Hotel. Doubles with breakfast there go for €142 and €155.