Hotels & Lodging Amy Fallon Quiet Hours, Curfews, and *Chores*? Why the Tide May Be Turning Against Airbnb
NewsNational Parks Photo Tips: How to Shoot Landscapes Like a Pro

National Parks Photo Tips: How to Shoot Landscapes Like a Pro 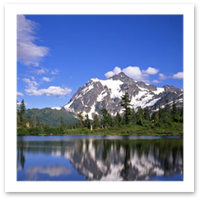 We’ve all seen them: those “I was here!” shots in front of Old Faithful Geyser in Yellowstone National Park, or the childhood photos of a family posing in front of the spectacular Grand Canyon.

While such classic shots instantly transport us back to the essential travel moments in our lives, it’s easy to create more dynamic, and ultimately more memorable, photos—especially in the National Parks, with their sweeping landscapes and 360 degree panoramic views.

Use the tips below to take advantage of the hundreds of amazing photo opportunities these parks have to offer. And you don’t need to shell out thousands of dollars on professional-quality DSLR cameras to make the best of them!

Visit our Focus on Photography section for more photo tips. All examples, below, are from Flickr.

When shooting landscapes, your first instinct might be to capture as much scenery as possible horizontally. Instead, try a vertical take on popular landmarks. This not only introduces character and perspective to your photograph, but can also add a layering and depth of field effect. Try not to limit your vertical shots to waterfalls and other naturally vertical landmarks.

Some of the best pictures are taken at times of day that frame dawn and dusk, as shooting in low natural light adds ambiance and an otherworldly feel to your photographs. The natural light at these times can produce some spectacular effects. Conveniently, you’ll be avoiding the crowds by arriving earlier in the day or leaving a little later.

There’s no need to hike all the way down the Grand Canyon in search of the best angle, but if possible, try a slightly different perspective on your subject. Instead of focusing on rock formations themselves, why not focus some elements such as trees and flowers in the foreground while keeping the main attraction slightly out of focus in the background?

Experiment with Black and White

As tempting as it might be to capture those red rock formations against clear blue skies in color, why not be your own Ansel Adams and experiment with black and white photography?

Shooting black and white images adds a certain mythical atmosphere to pictures. All your attention is subconsciously directed towards a particular element within the photograph without the distraction of color.

If you’re still finicky about missing a great color opportunity, shoot in color and convert to black and white later using Photoshop or other photo processing software.

Nothing spoils a potentially captivating scene quicker than a cheesy pose. While posed family pictures do have their rightful place in your vacation photo collection, try capturing more unplanned moments. Not only does adding the human element portray a sense of scale, it also tells a story of how people are spontaneously interacting with the natural grandeur around them.

Lola Akinmade is a writer and photographer who has written for many travel resources and received accolades for her work. She is also an editor with the Matador Network.