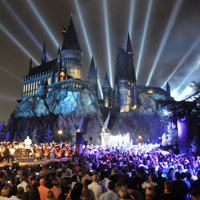 Last Friday, the Islands of Adventure theme park at Universal Orlando fulfilled the fantasy of Harry Potter devotees when it unveiled the biggest addition since the arrival of Disney’s Animal Kingdom in 1998. The highly publicized premiere revealed that the Wizarding World of Harry Potter recycles some attractions while seamlessly introducing movie-magic-perfect re-creations of mythical locales such as Hogsmeade Village.

Playing supporting roles are a handful of candy shops, souvenir stores, and restaurants that are each expertly and exquisitely themed to make you believe you’ve boarded the Hogwarts Express and arrived in the incredible fantasy world of J.K. Rowling.

Here’s a rundown of what you’ll find. When you visit, expect to be impressed . . . and to wait in line.

Past guests will recall this as Dueling Dragons, the tandem roller coaster (Fire and Ice) that shot you out of the station and into a wild and winding half-mile ride. Now it’s the Chinese Fireball and Hungarian Horntail that rocket you in a screaming snap-crackle-pop ride along the rails. In the queue line watch for iconic elements from the Tri-Wizard Tournament; channel those games (or maybe a Quidditch match) when you get hung up in your seat (you’re suspended beneath the track) on one of the rides of your life. Making it even more exciting, the coasters are programmed by computer to bring them just feet apart as they blaze through the track at speeds up to 60 miles per hour. There’s a 54-inch height requirement. Tip: This ride is perfect for teens and adventurous tweens.

Flight of the Hippogriff

Once known as the Flying Unicorn, this kid-friendly (or at least to kids 36 inches or taller) coaster is a simple way to introduce your children to the pleasures of g-force and vertigo. The queue line takes you past Hagrid’s hut and then onboard for a “training flight” above the grounds of Hogwarts Castle. Along the way, there are some nice little twists and dips that’ll give them a pint-size dose of adrenaline. This is an easy alternative to the Dragon Challenge. Tip: Bring smaller kids here while the older kids ride Dragon Challenge.

Harry Potter and the Forbidden Journey

The queue line here is a major part of the attraction. To prepare you for the ride ahead, you’ll enter Hogwarts and see the sights you know from the books and films: Headmaster Dumbledore’s office, Defence Against the Dark Arts classroom, Gryffindor common room, Room of Requirement, and the greenhouse. You’ll also encounter the Sorting Hat, the One-Eyed Witch statue, and several talking portraits. Before reaching the actual ride, heroes Harry, Ron, and Hermione persuade you to skip a lecture and follow them on a soaring journey.

Thanks to a combination of live-action, robotic technology, and innovative filmmaking you come face to face with a flying dragon and the Whomping Willow before being propelled into the heart of a Quidditch match. You also zip through a dozen scenes and encounter supporting characters Albus Dumbledore, Rubeus Hagrid, Draco Malfoy, and members of the Weasley family. If the visuals aren’t enough to fuel this fantasy, a soundtrack from composer John Williams will even the score. Tip: This ride works for all but the smallest and the biggest—there’s a size minimum (43 inches tall) and maximum (6’3″ and under 250 pounds).

In Hogsmeade you’ll find the signature restaurant, Three Broomsticks, which serves traditional British fare (as well as an assortment of kids meals), and the Hog’s Head Pub, where you can down a pint of Butterbeer or pumpkin juice. The village is also a good place to run errands and pick up sundries. Send a postcard or letter stamped with a novelty (and very real cancellation mark) at Owl Post before selecting (or being selected by) a magic wand at Ollivanders. Pick up some practical jokes (shrunken heads, extendable ears, screaming yo-yos) at Zonko’s, and sample strange sweets at HoneyDukes. But the best place to shop for Potterabilia is Dervish and Banges, where there are Hogwarts school uniforms, robes, scarves, T-shirts, and broomsticks—including the legendary Nimbus 2000.

Right now, one of the easiest ways to visit the Wizarding World is with a package deal through Universal. A four-night stay for a family of four ranges from roughly $830 at a hotel just outside Universal to $1,550 at one of the on-site resorts—Loew’s Portofino Bay, Loew’s Royal Pacific, or the Hard Rock Hotel. Also included are, among other things, breakfast at the Three Broomsticks, early park admission, and a three-day base park ticket.