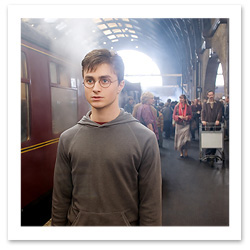 July belongs to Harry Potter. The final book in the much-loved series, Harry Potter and the Deathly Hallows, hits bookstores July 21, but not before the film version of the fifth book, Harry Potter and the Order of the Phoenix, debuts in theaters July 11. Where best to celebrate the culmination of a 10-year love affair with J.K. Rowling’s world of wizardry than the United Kingdom? The films’ often breathtaking backdrops skip from London to rural England to Scotland’s Highlands; the author calls Edinburgh home. Here are 10 top stops for a Potter-themed trip.

Harry Potter took the Hogwarts Express to school from the imaginary platform 9 3/4 (platforms 4 and 5 were the actual shooting site) in the Potter movies. A sign for platform 9 3/4 can be seen hanging outside a secondary building of the station where tracks 9 and 10 are actually located; half of a luggage trolley is lodged in the wall just below.

The cute 1865 train station of this moorland village, 8 miles southwest of Whitby, served as Hogsmeade Station for students arriving at the school of wizardry in Harry Potter and the Sorcerer’s Stone.

The castle grounds appear in the first two Harry Potter films as the exterior of Hogwarts School, in scenes such as the Quidditch match. The Castle is on the edge of town, above the junction of Narrowgate and Bailiffgate. www.alnwickcastle.com.

The college’s medieval dining hall contains portraits of many famous alumni, including John Wesley, William Penn, and 13 of Britain’s prime ministers. A reproduction of this room appears in the banquet scenes at Hogwarts School.

Bodleian Library, Oxford
In several of the films, some interior scenes at Hogwarts School take place in parts of the Bodleian, including the Divinity School, a vaulted room dating back to 1462. www.bodley.ox.ac.uk.

The Reptile House in London Zoo is a draw for Harry Potter fans — it’s where Harry, in the book and film versions of Harry Potter and the Sorcerer’s Stone, discovers that he can converse with snakes and make magic happen.

Lacock Abbey was used for some scenes at Hogwarts School in the first Harry Potter film. Founded in the 13th century, the abbey was a private residence from 1539 until it was donated in 1944 to the National Trust. Film versions of Pride and Prejudice and Emma were also filmed here. Just east of A350. 01249/730227. www.nationaltrust.org.uk.

A stone’s throw from the Tower Bridge in London’s South Bank, Butlers Wharf makes an appearance in the newest film Harry Potter and the Order of the Phoenix.

J.K. Rowling penned some of the first two Harry Potter novels in the comfy confines of this cafe, which is now a permanent fixture on many Potter-themed tours. 21 George IV Bridge, Edinburgh. 0131/220-5355.

Glenfinnan, perhaps the most visitor-oriented stop on the route between Maillaig and Fort William, has a lot to offer students of Scottish history. Potter fans, whose ranks might outnumber aficionados of Scottish history, know the region because of the Glenfinnan Viaduct, which appears in multiple Potter films. It stretches across the green slopes above the banks of the Loch Shiel, Hogwart’s lake.