News Apeksha Bhateja What Are the Chances You'll Get Monkeypox at a Hotel?
NewsOn the Ground in: Wimbledon

On the Ground in: Wimbledon 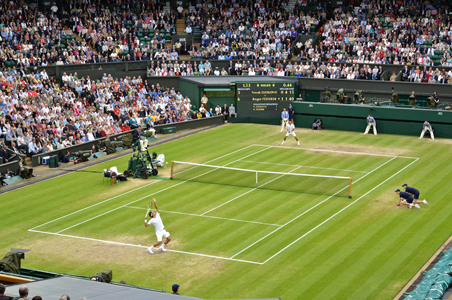 It’s been a strange Wimbledon so far this year, with many of the world’s top players out in early rounds (Maria Sharapova, Roger Federer, and Rafael Nadal are all out already). But the two week tournament has just begun, so we turned to a resident expert who’s on the ground in England for some tips on spending time in the area, how to navigate the grounds, and more.

For fans looking to get in without tickets, the most realistic option is joining The Queue. The best way is to join at Gate 3 several hours before opening time at 9.30 am. Just know that the really committed will have arrived the night before. Ground Passes are issued first come first served, one per person, cash only. Once inside, you can also join a queue for main court tickets that have been resold by ticket holders.

The site includes a museum, however tours don’t operate during the Championships.

If you’re not lucky enough to get a ticket, grab a deckchair, join the locals, and watch the tennis live on the big screen on the Piazza, outside Morrison’s supermarket. Matches show daily between 11 am and 9 pm, free, no ticket required.

A precious slice of countryside in the city, free, and a little bit wild, the Common is the perfect place to walk, run, or take a picnic. Numerous trails lead walkers around woodland, ponds, streams and open space. The ground can be boggy in places after rain, but the main gravelly trails are walk-able with everyday footwear. At the center is the Windmill Museum and Cafe.

Wimbledon is, of course, a charming area of London before and after the Championships. Go in nice weather for adventures like horse riding with Wimbledon Village Stables. A serious riding school, they offer escorted trail rides across the 3,000 acres of countryside made up of Wimbledon Common and adjacent Richmond Park. You don’t have to be a member, but be sure to call ahead to discuss availability for your riding level. Beginners should expect to take a private lesson before going out on a group ride.

After a long day of high tension at the tennis, end with some peace and serenity. Jiva Health is a friendly and welcoming yoga and Pilates studio, next to the station and run by experienced teachers. They offer a variety of classes for all levels and class styles range from athletic to relaxing. Meditation and massage are also available.

After a match (or instead of one if the weather’s not cooperating), the HMV Curzon has comfortable screening rooms with excellent sound quality, and a spacious bar. Aside from some of the latest releases, catch documentaries about tennis greats like Billie Jean King, and Venus and Serena Williams during the Championships.

Hitting up the tournament with the family? Wimbledon’s much-loved children’s theater stages plays and workshops for kids aged 0 -13 years, Wednesdays through Sundays. This year, on June 29, they’ll host Wimbledon Shorts, a festival of new film and video from around the world.

Where to Eat Nearby

Fox & Grapes: Nestled among the trees and open spaces of Wimbledon Common, the Fox & Grapes offers an exciting menu of classic seasonal English dishes. Lunch might be potted duck, or chicory salad with bitter orange dressing. Dinner includes Buccleuch steaks and other roasts from the enclosed charcoal fired oven.

Maison St Cassien: At the heart of Wimbledon Village, this busy local haunt serves Mediterranean and Lebanese mezze, lasagne, salads, and baklava to tennis fans and regulars. At quieter times, grab a table outside and watch the comings and goings.

Sticks and Sushi: Japanese food, Copenhagen style? This Danish-designed restaurant offers traditional sushi and sashimi, with an eye on sustainability. More elaborate dishes include softshell crab, sparkling tuna, and a multitude of meat skewers, salads, and desserts. The picture menus can seem a little daunting, but staff are knowledgeable and very willing to guide newbies.

Quick Tip: Don’t worry—Wimbledon is well signposted, and all of the above suggestions are either en-route from the train station to the tennis grounds along the ‘Wimbledon Way’, or close by.