Travel back in time at the eternally magical Acropolis. 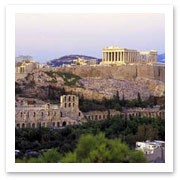 Described by the 19th-century poet Lamartine as “the most perfect poem in stone,” the Acropolis (pictured right) is a true testament to Greece’s Golden Age. Many of its structures were built from 461 to 429 BC, during the greatest flowering of Athens’ intellectual and artistic life. Athens

See the world as the ancient Minoans did at Crete’s Archaeological Museum. The Minoan civilization of 3,000 years ago is brought to life with a vast collection that includes seal stones, pottery, jewelry, tablets, and fragments from frescoes unearthed in Knossos. Eastern Crete

Feel the ages at the Benaki Museum, where objects from pre-history share the spotlight with Byzantine icons and exhibits as diverse as Lord Byron’s pistols and the recreation of an entire Macedonian town. Athens 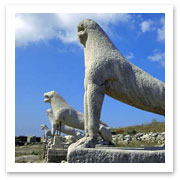 Lose yourself amid the vast archaeological ruins of Delos (pictured right), which was sacked by Mithridates in 88 BC and eventually abandoned. The French School of Archaeology has been unearthing treasures here since it laid claim to the island more than 130 years ago. Cyclades

Expect the unexpected at Athens’ National Archaeological Museum, the most important museum in Greece, a place where prehistoric, Egyptian, and Mycenaean artifacts recreate the grandeur of the past. The museum is home to countless treasures, including the priceless Santorini frescoes, now restored after being damaged in a 1999 earthquake. Athens 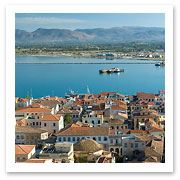 Embrace eternity on the hill of the Palamid, in Nafplion, where unobstructed views of the peninsula stretch for miles upon miles under an azure blue sky. The ancient Greeks found this vista so inspiring they dubbed it Oraia (beautiful). Northern Peloponnese

Live the dream, the Minoan one, at the Palace of Knossos (pictured below). The vast ruins convey the nobility that informed ancient Minoan culture. The remains include impressively sized clay tubs, grand double doors, a megaron decorated with frescoes of dolphins, and the oldest throne in Europe. 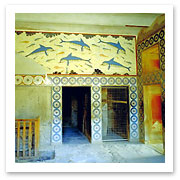 Soak up the sun on Kalathas and Stavros beaches in Western Crete’s Hania, the island’s capital until 1971. Wend your way through old narrow streets to the lighthouse, where you’ll be treated to heart-stopping views of the town and the White Mountains looming behind. Western Crete

Encounter eternal mysteries at the ruins of the Palace of Phaistos, one of the greatest of Minoan palaces. The copious remains here include a grand staircase, the Propylon porch, and storerooms containing remains of mammoth pithoi (pots and containers). Elsewhere on the site, in 1903, archaeologists discovered the Phaistos Disk (pictured right), a flat clay object covered with complex symbols believed by some to be an early form of encryption. Western Crete