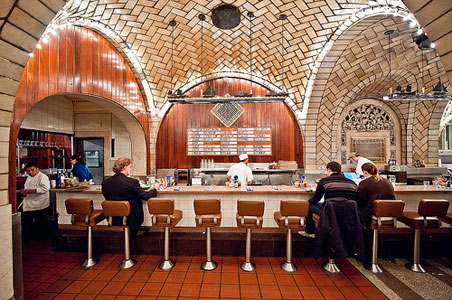 Grand Central, New York City’s iconic train terminal (remember it’s not a station) turns 100 this February. This beloved landmark on 42nd Street with its celestial ceiling and iconic clock is a little city within a city with shops, exhibits, and daily events—it’s also chockablock with places to dine. In fact, there are more than 35 eateries including the sprawling lower level food court serving everything from margarita pizza to Magnolia Bakery cupcakes. But there are also several fine dining restaurants within the 49-acre complex that you may not know about. So to celebrate its centennial, why not pick one (or a few), grab a seat, and watch the world go by.

Of course, you can’t mention dining in Grand Central without talking about the Oyster Bar & Restaurant on the lower level. Known for its beautiful vaulted off-white tiled ceilings, the cavernous cafeteria-style space hasn’t changed much since it opened in 1913 (it too celebrates its centennial next month). At lunchtime, join the throngs of office workers, shoppers, and tourists sitting at one of the various counters for a creamy bowl of New England clam chowder and a plate of East Coast oysters. If you have time for a more leisurely meal sit in the wood-paneled dining room with its red-and-white checkered tablecloths.

Located on the West Balcony and accessed most easily via Vanderbilt Avenue, this outpost of the glamorous (and pricey) Cipriani restaurant chain (Venice, Hong Kong, Miami, etc.) is bustling from lunch until late evening. Snag a seat at the bar and order the signature Bellini cocktail and take in the scene that includes businessmen in sharp suits and plenty of European accents. Diners should reserve along the balcony overlooking the main hall where you can watch busy commuters go by while tucking into plates of beef carpaccio and risotto alla primavera.

Directly across from Cipriani Dolci, also on the West Balcony and stretching along the North Balcony, is this elegant steakhouse owned by the Glazier Group (which licenses the former Chicago Bulls superstar’s name). It’s definitely a hotspot to meet up with friends or co-workers for a beer or glass of wine before catching a Metro-North train back up to Westchester or Connecticut (and, yes, many a train has been known to be missed). In addition to filet mignon, New York strips, and bone-in ribeyes, the menu features Maine lobster along with crusted yellowfin tuna.

While this jewelbox cocktail lounge behind Cipriani Dolce doesn’t serve food (other than bar bites), it’s worth stopping in for a drink—it’s by far one of the most elegant interiors in New York City. Formerly, the office of 1920s tycoon John W. Campbell, it’s now a serene hideaway for harried commuters and in-the-know New Yorkers who unwind on couches and comfy armchairs with a dirty martini or a handcrafted cocktail amidst rich architectural detailing that includes a 25-foot high leaded glass window, a huge limestone fireplace, and an intricately painted beamed ceiling.