News Samantha Linnett Is This Budget Travel Hack Worth the Risk?
NewsGolden Gate Bridge, There’s an App for That

Golden Gate Bridge, There’s an App for That 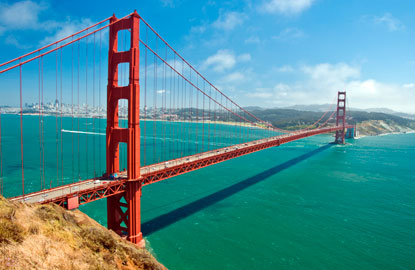 The Golden Gate Bridge may have already celebrated its 75th anniversary, but a clever, educational, and interactive app about this iconic span is a cool, interactive gift for travelers to the City by the Bay.

Whether it’s your first visit or your 75th to San Francisco, the free GoGGBridge app (available only for the iPhone) is chock full of fascinating facts, photos, videos, and travel tips to heighten your knowledge of—and appreciation for—the most famous bridge in the world.

Dig in with the "Explore the Bridge" category, whose "Nuts & Bolts" section highlights key numbers (it weighs 887,000 tons and stretches across 1.7 miles, with an astonishing 600,000 rivets in each tower) and a timeline of key events leading up to construction.

"PLAN YOUR TRIP" is packed with travel tips, maps, and points of interest, including several in the less-tourist-traveled Marin Headlands (among them: SF-88, the only restored NIKE Missile site in the country, which is open to the public Wednesdays through Fridays, and 150-year-old Point Bonita Lighthouse).

Kids will get a kick out of "True Tales," a highlight of which is a video of black-and-white footage of a horse named Blackie swimming across the Golden Gate Strait in 23 minutes and 15 seconds, with his trainer hanging onto his tail, no less.

History buffs, meanwhile, will especially enjoy audio recordings from actual bridge workers recalling rescue missions and close calls, including stories from members of the Halfway to Hell Club – the name given to the 19 workers who were saved by the safety nets.

Equally engaging (and under the category of "Bridge Fun") is "painting" the bridge with your finger in the yellow-and-black color scheme proposed by the Navy to improve visibility to ships. In the same category is a bridge foghorn that sounds with the tap of a finger – which, come to think of it, would make a mighty cool ringtone.