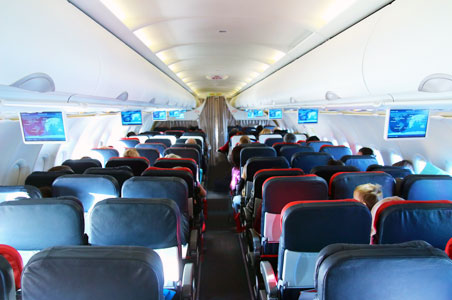 Faster in-flight WiFi is coming—eventually—to Virgin America’s fleet thanks to a new solution unveiled by Gogo. The system, called Ground to Orbit ("GTO") should see download speeds increase to approximately 60 megabits on each plane, a 20x increase from the 3 megabit speeds the Gogo service launched with 5 years ago and a 6 increase over their current peak system known as ATG4. The system is expected to enter service in approximately one year, pending FAA approvals.

GTO gets its improved download speeds by leveraging a satellite connection in addition to the ground-based connection ("ATG") that Gogo typically uses. Uploads from the plane to the internet will continue to use the ATG network while downloads from the internet will travel over a one-way satellite link. This hybrid model allows for the higher speeds passengers crave while also allowing for a lower cost system for the airlines. The antenna is smaller and lighter, plus much higher bandwidth thanks to being a one-way system.

And, while 60 megabit sounds like it should be plenty of bandwidth for things like streaming TV or movies while in the air Gogo is still cautious on that front. The system is still not going to deliver HD streaming performance to every passenger on board, though short clips will be viable. Gogo also sees potential for the GTO platform to support streaming a small selection of IPTV channels to the plane but not individual movies or shows for each passenger.

While the new system is still roughly a year out Gogo has been testing it with existing hardware—both the satellite and antenna—and is confident that they can deliver the product to Virgin America and other customers just as soon as the FAA certification is received. Given customers’ insatiable appetite for more bandwidth in the sky the new kit cannot come online soon enough.