How to Celebrate Gettysburg’s 150th Anniversary 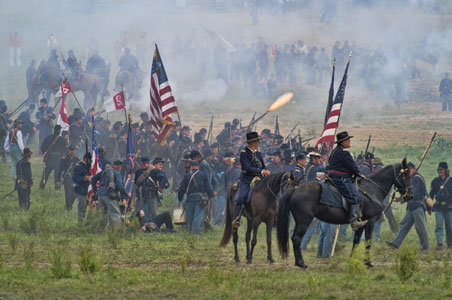 "The world will little note nor long remember what we say here, but it can never forget what they did here." The words, of course, belong to Abraham Lincoln. But the here belongs to Gettysburg, Pennsylvania, 55 miles northeast of Baltimore and 80 miles north of Washington, DC. It was here on July 1, 1863, 150 years ago next month that the American Civil War came the closest it would ever come to being lost, as an 85,000-man rebel army under Robert E. Lee swept up into Pennsylvania, colliding with George Gordon Meade’s 95,000-man-strong Federal Army of the Potomac. This July marks the 150th anniversary of that great battle, and with it a slew of commemorative events that will attract visitors from across the country.

Any anniversary visitor will want to begin at the Gettysburg National Military Park’s Visitor’s Center (located 1195 Baltimore Pike), which boasts over 43,000 battle artifacts in its collection. Paul Philippoteaux’s famed ‘Cyclorama’ of the battle, painted in 1883, is housed here, including a special film introduction to the battle place visitors in the middle of the action.

The battlefield itself is the principal attraction, drawing over a million visitors a year with its 1,324 monuments, plaques, and markers, spread over 6,000 acres. One could spend a week alone walking the grounds. The most important points of interest for a first-time visitor are: 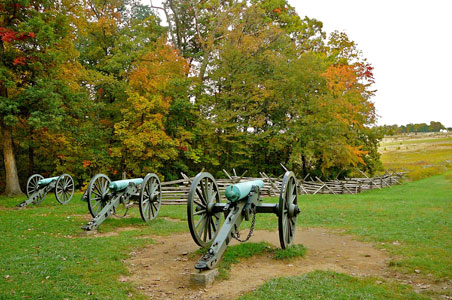 Little Round Top, the rocky eminence which dominates the southern end of the battlefield and offers breathtaking views to the west and north.

The Angle, often called the ‘high-water mark of the Confederacy,’ where George Pickett’s Virginia division was stopped in the midst of its famous Charge on July 3, 1863.

The iconic Evergreen Cemetery Gatehouse, which dominates the landscape of Cemetery Hill, the center around which the battle circled.

The Soldiers National Cemetery, where 3,512 Federal soldiers were buried (979 of them unknown) and the spot where Lincoln delivered the Gettysburg Address.

The Pennsylvania State Monument (1910-1913), the most prominent memorial on the battlefield, honoring Pennsylvania’s 1100 dead in the battle and listing the names of more than 34,000 Pennsylvanians who fought here.

Surrounding the battlefield is the town itself. Gettysburg is home to some 148 buildings of historical significance; many of them are open to visitors during the Anniversary. Anyone seeking to add context to their exploration of the battlefield should make a point of visiting: 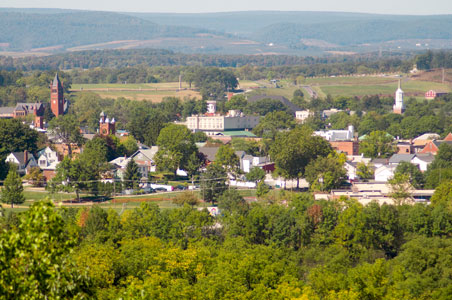 Schmucker Hall, on the Lutheran Theological Seminary campus, was used by Union cavalry as an observation post on the first day of the battle and now is home to the Seminary Ridge Museum.

Gettysburg College’s Pennsylvania Hall, which was built in 1832 and served during the battle as an observation post and a battlefield hospital.

The Gettysburg Train Station is virtually unchanged from the evening when Lincoln arrived in Gettysburg, as is the David Wills House (on Lincoln Square) where Lincoln was hosted on the night of his address.

No one seems to want to leave Gettysburg without a souvenir, including the soldiers who fought here and the first generation of tourists who showed up only two days after the battle closed. Serious Civil-War-istas will be delighted by:

Civil War artifacts and antiques at The Horse Soldier and The Union Drummer-Boy (42 York Street). Find Civil War books at Pages of the Past, For the Historian, Battlefields and Beyond, and the American History Bookstore.

Reproduction uniforms, equipment, and hats for re-enactors (and others) offered by The Regimental Quartermaster, Abraham’s Lady, S&S Sutler, and Dirty Billy’s Hats.

Even Civil War-themed art is on offer—Dale Gallon’s work is on exhibit at Gallon Historical Art Gallery and Wendy Allen features her Lincoln portraits at the Lincoln Into Art Gallery.

Food was a priority for Civil war armies, and it gets its due for modern visitors at places like the Dobbin House, which was built as a roadside tavern in 1776, before the town of Gettysburg was even laid-out. Or the Farnsworth House, which occupies a house used by Confederate skirmishers on July 2nd and 3rd, 1863. And lastly, The Pub, which has burgers to dream about.

Allen C. Guelzo is the Henry R. Luce Professor of the Civil War Era and Director of Civil War Era Studies at Gettysburg College. He is the author of Lincoln’s Emancipation Proclamation: The End of Slavery in America and Abraham Lincoln: Redeemer President, both winners of the Lincoln Prize. Guelzo’s essays, reviews, and articles have appeared in publications ranging from The American Historical Review and The Wilson Quarterly to newspapers such as The Philadelphia Inquirer and The Wall Street Journal. His latest book, Gettysburg: The Last Invasion, was released last month.