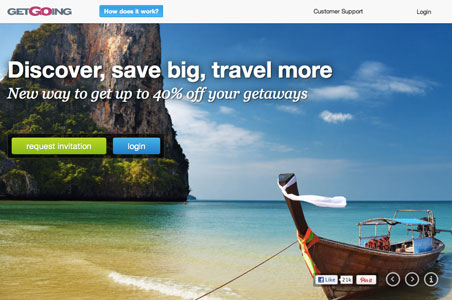 Listen up… There’s a new way of flying, and apparently it’s by the seat of your pants. Actually, it’s called GetGoing.com, a flight-booking site takes a bold approach to travel decisions…

It makes them for you.

That’s right, feeling a little indecisive or adventurous about your next destination? Give GetGoing.com an idea of the general area of the world you’d like to see OR the kind of a vacation you want to take, and it will scour its resources for discount flights up to 40% off.

The catch? Once you narrow down your destinations to two, the site makes your final destination choice and books one of the two flights. Let’s break it down…

Step 1: GetGoing asks you for a city name or airport of departure, a world region (i.e. Africa and Middle East), or type of experience (like "Beaches and Sun" or "History and Culture"), dates of departure and arrival, and number of travelers.

Step 2: They provide a list of destinations, flight options, and even allow you to compare prices with other travel sites.

Step 3: You choose two destinations/flights based on preferred time, price, number of stops, airport, and duration of flight.

Step 5: Feel a tingle up your spine as the anticipation builds.

Step 6: GetGoing books one of the flights, and only then do you find out where you’re headed. Surprise! (Sort of!)

In an interview with NBC News, co-founder and CEO Alek Vernitsky explains that the aspect of not knowing for sure where you’re going cuts out a large swatch of flyers who would rather pay full-price for specificity’s sake. So the airlines can be more accommodating to flyers who won’t pay full price and offer discounts.

As of now GetGoing offers more than 15 airports of departure to destinations worldwide, with more airports to come, according to the company. Due to contracts with its suppliers the site uses a firewall, so consumers will need to request an invitation and then create a login for the site. But at up to 40% off, and with, quite frankly, a bit of a thrill to boot, it may be well worth it.